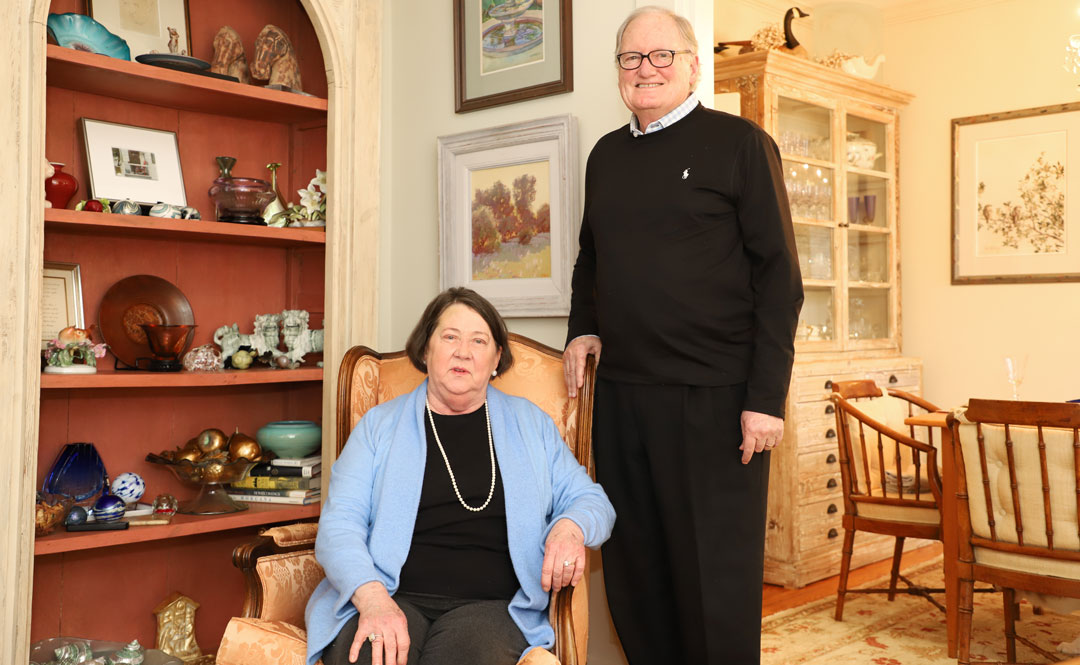 Melody and John Maxey of Oxford, Mississippi, have given a prized watercolor by artist Dean Mitchell to the University of Mississippi Museum and Historic Houses. The piece, “Signs of the Times," will be featured this month in the museum’s pop-up space. The University Museum is open to the public 10 a.m. until 6 p.m., Tuesday through Saturday.

Art collectors Melody and John Maxey of Oxford, Mississippi, have gifted a prized watercolor by renowned artist Dean Mitchell to the University of Mississippi Museum. The piece, “Signs of the Times,” will be the signature artwork featured this month in the museum’s pop-up space.

Mitchell, an African-American artist living in Florida, has been honored with numerous awards for his work focusing on portraits, landscapes and still lifes. He has been applauded by art critics and publications, including the New York Times, which described Mitchell as “a virtual modern-day Vermeer of ordinary black people given dignity through the eloquence of his concentration and touch.”

Robert Saarnio, director of the University Museum and Historic Houses, said the museum is fortunate to add the piece by a major American artist to its permanent collection.

“Mr. Mitchell’s career and body of work are highly distinguished, so the addition of a piece by this brilliant painter adds considerable artistic value to our collection and to its educational mission in service to the community and the curriculum.”

For the Maxeys, the gift is a way to share their passion for the arts and the UM Museum with others.

“We think it’s important to support the arts, any kind of art, whether it’s music, painting or sculpture, and to share the arts,” said Melody Maxey, who, along with their daughter, is an artist as well. “Art is a language that we have in common with everyone, regardless of where they live in the world.

“We hope that people who see this work will appreciate the beauty of the art and the message it sends, which is that, as Mississippians, we can all learn to live together in peace and harmony.”

The University Museum’s permanent collection acquires new works primarily by donation as opposed to purchases, Saarnio noted. Consequently, the facility – which is frequently named to esteemed rankings of national academic museums – relies on thoughtful contributions by supporters, such as the Maxeys.

“We are beyond indebted to our very gracious and dear friends, John and Melody Maxey, for their vision and generosity in making this extraordinary gesture of support and goodwill toward our museum and our university,” Saarnio said.

“This particular addition to the collection holdings will be exhibited twice in its first two years of arriving to our museum, so appreciative are we of its compelling composition and rendering, its creator’s significant reputation, and its teaching potential for art students who use the collection for example and inspiration, and their faculty in conveying art historical context.”

The Maxeys were introduced to the world of art collecting when they were Ole Miss students. Their connection to the UM Museum goes back even further.

Melody Maxey was a student on the Oxford campus when she and her roommate pooled their money to buy a painting created by a fellow student, who had hung several of his paintings on a clothesline advertising his art. The fellow student? William “Bill” Dunlap, the now highly acclaimed artist, writer and arts commentator.

The Maxeys’ association with the UM Museum stretches back so many generations, the museum is almost like family. In fact, it is family.

Melody’s grandmother’s first cousin was Mary Skipwith Buie of Oxford, and the UM Museum traces its beginnings back to 1939, when the Mary Buie Museum opened. An art collector and artist, Buie bequeathed her personal art collection to the city of Oxford, and her collection remains in the museum’s permanent collection today. While the city of Oxford operated the original Mary Buie Museum for decades, it was deeded to UM in 1974.

Today, the Maxeys’ ancestral link to the UM Museum is proudly carried on by their pet pooch named “Buie.”.

The Maxeys have a lengthy history of supporting the arts in Mississippi. They’ve given seven paintings to the Mississippi Museum of Art in Jackson by Mississippi artists such as Sanders McNeal, Glennray Tutor, Miriam Weems, Kennith Humphrey and Dunlap.

While they’ve acquired some fine art over the years, the Maxeys downplay any suggestion that they’re professional art collectors.

“The term ‘art collector’ sounds a bit elevated where we are concerned,” John Maxey said. “To say we’ve had a well-devised plan to obtain certain works of art would be a bit much. We bought pieces that we liked for amounts that we could afford.”

A graduate of the UM School of Law, John Maxey started his career working for legal services in Holly Springs, Mississippi. The couple lived in Oxford their first few years after college before moving to Jackson, Mississippi, where John again worked for legal services. Eventually he started his own firm, Maxey Wann, in Jackson, but after a half century of practicing law, John retired and the couple returned to Oxford a few years ago.

As her husband was building his law practice in Jackson, Melody Maxey worked in real estate and devoted much of her time assisting nonprofit organizations, especially those associated with the arts. Their acquisition of the Mitchell watercolor was the result of a fortuitous collision of their professional involvement in the legal business with their personal interests in the arts.

“A friend of ours, Bryant Allen, owned Bryant Galleries, and he hired John to represent him. As soon as I went to his gallery, I thought, ‘Oh dear. I shouldn’t have come in here,’” said Melody, laughing as she recalled the many tempting works of art in Allen’s gallery.

“Bryant had Mitchell’s ‘Signs of the Times’ on display and said to us, ‘This one is yours. It has your name on it.’ It’s a terrific piece and we had the great pleasure of getting to meet Dean.”

Individuals and organizations can learn more about supporting the University Museum by contacting Rob Jolly at 662-915-3085 or jolly@olemiss.edu or visiting online at https://give.olemiss.edu.