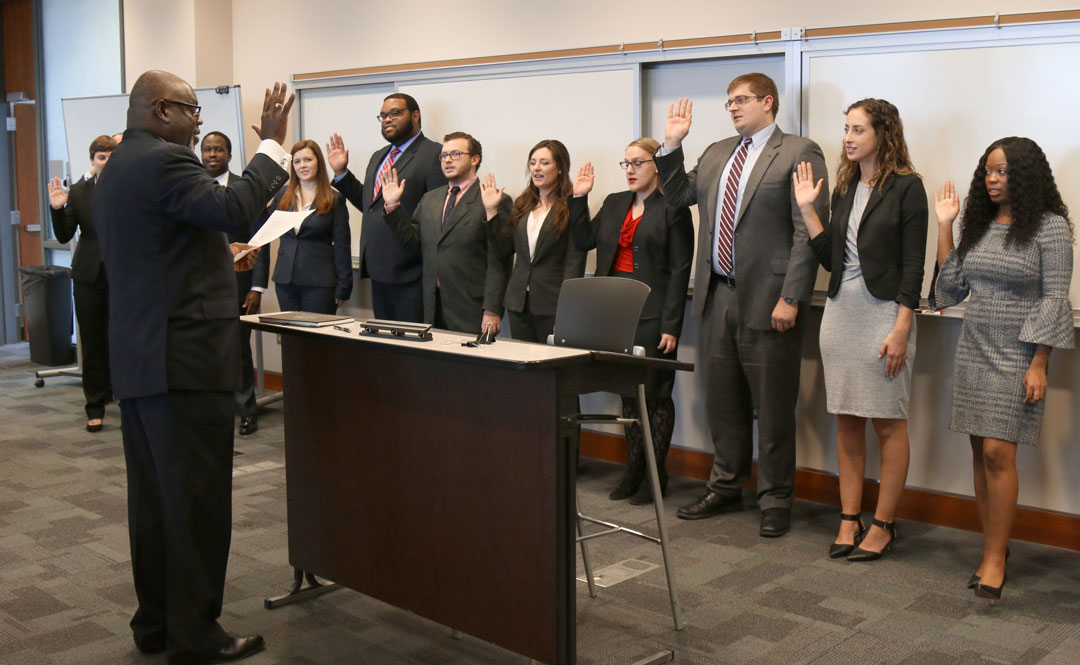 Recent gifts to the University of Mississippi School of Law could prove to be instrumental in sparing a man’s life.

Vital Projects at Proteus, a donor-advised fund, made a $50,000 gift to the law school’s George C. Cochran Innocence Project to be used in the ongoing defense of Curtis Flowers — a Winona, Mississippi, man accused of multiple murders.

“We oppose the death penalty and give grants to help end it. We are very proud to support the University of Mississippi’s work on this case,” said David Menschel, the fund’s advisor.

The State of Mississippi tried Flowers six times for the July 1996 shooting deaths of four employees of Tardy Furniture store in Winona. The sixth trial in 2010 resulted in a fourth conviction for Flowers, which the state Supreme Court affirmed. In 2019, however, the U.S. Supreme Court overturned the conviction, finding that Mississippi District Attorney Doug Evans, the prosecutor in all six trials, used racial bias to illegally stack the juries in his favor.

After more than 20 years in the state penitentiary, Flowers, who has never been acquitted of the crimes, is free on bond and waiting for the state to decide if it will try him for a seventh time. Evans has recused himself from the case.

“We represented Curtis Flowers in the post-conviction piece of the case,” said Tucker Carrington, a UM law professor and director of the Innocence Project, one of nine clinics designed to give Ole Miss law students the opportunity to gain real-world experience, understand ethical obligations and develop a commitment to furthering broad access to the legal system.

“Law students, once they have taken the requisite number of course credits, can be sworn into limited practice and under the supervision of an experienced lawyer may represent clients,” Carrington explained.

In Flowers’ case, Carrington and his Innocence Project students worked with Washington, D.C.-based law firm Hogan Lovells to gather evidence of Evans’ racial bias, which the U.S. Supreme Court would ultimately review in making its decision to overturn the case.

As the workload increased, Carrington asked Menschel for advice on how to cover expenses associated with hiring additional defense attorneys.

“The case had compelling racial justice and innocence angles,” Menschel said, explaining Vital Projects’ inclination to provide unrestricted financial assistance. “While extraordinary in some ways, it was more like an intersection between all sorts of problems with the system that we care about.”

The Innocence Project also received an additional $25,000 gift from a donor who asked to remain anonymous.

“We have long been concerned with the inequities of our criminal justice system, and when we read about the work being done by the University of Mississippi’s Innocence Project, particularly in the case of Curtis Flowers, we decided to provide it some support,” the donor said. “We could not be more pleased with the Innocence Project’s ongoing efforts and the successes that have been achieved.”

The State vs. Curtis Flowers is just one of about a dozen cases that the Innocence Project is working in active litigation.

“The goal is always a new trial or exoneration,” Carrington said. “We advocate for those whose cases demonstrate a legal basis for factual innocence.”

To make a gift to the Innocence Project at the University of Mississippi School of Law, visit http://give.olemiss.edu or for more information, contact Suzette Matthews, development officer, at 662-915-1122 or suzette@olemiss.edu.

The Innocence Project, named for longtime UM constitutional law professor George C. Cochran, is committed to providing the highest quality legal representation to its clients: Mississippi state prisoners serving significant periods of incarceration who have cognizable claims of wrongful conviction. In addition, the Innocence Project seeks to identify and address systemic problems in the criminal justice system and to develop initiatives designed to raise public and political awareness of the prevalence, causes and societal costs of wrongful convictions.