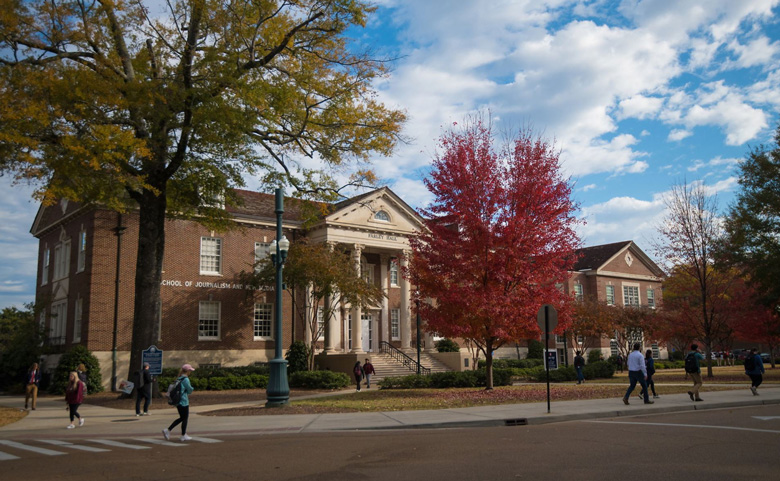 The late Trey Jordan (below) established a scholarship endowment that benefits students in the University of Mississippi’s School of Journalism and New Media.

Colleagues of the late Trey Jordan of New Orleans, Louisiana, describe the University of Mississippi alumnus as the consummate professional, an outstanding leader and great motivator who was honest, sincere and compassionate. He was well-rounded, they said, and fun – even at work for Northrup Grumman Corp., where he served as an information technology professional for 17 years.

Jordan’s wife, Lyn Kieltyka, said her husband would give credit to Ole Miss for building his knowledge base and strengthening the social skills that his colleagues found so appealing.  He passed away in 2018 after a lengthy illness.

“The great people Trey met at Ole Miss and the life-changing experiences he had shaped him into who he was,” said Kieltyka who recently made a $50,000 gift to the university, finalizing her husband’s desire to establish a scholarship at his alma mater.

“Ole Miss was where he found himself, and the university remained a major part of his life. He hoped and wanted to encourage other Ole Miss students to have a similar experience.”

Dean Will Norton expressed his gratitude for Jordan’s vision.

“This scholarship will create many opportunities for our students, allowing them to develop academically and participate in career building activities on campus beyond the classroom,” he said. “I also hope that it will help pave the way for students to find, as Trey did, their place within our programs.”

Jordan earned a bachelor’s degree in business and journalism from the university in 1997. In 2003, he completed a master’s degree in international business administration at Tulane University in New Orleans, where mutual friends introduced him to the woman who would become his wife.

“Trey was an extremely giving person,” Kieltyka said. “He always wanted to encourage everyone to reach their full potential. He believed by creating this scholarship, he could help do that while also easing the tremendous financial pressure many college students find themselves under.”

At Northrup Grumman, Jordan supported a variety of enterprise-based IT strategies, most recently leading an initiative that coordinates online collaborative activities across all sectors of the company. Additionally, he supported the development of enterprise iOS/BB/Android® applications and the company’s Mobile Device Management (MDM) considerations.

During his tenure with the company, Jordan held leadership roles in the areas of supply chain management, enterprise process development and quality assurance. He also provided multisector leadership with such initiatives as iBuy, Process Excellence, Portfolio Management and external partner collaboration.

Jordan was born in South Ruislip, England, and raised in Haven, Kansas. Ultimately, however, he fell in love with New Orleans and called it home.

UM Foundation president and CEO Wendell Weakley said scholarships like Jordan’s give students more time to focus on academics, open opportunities for involvement in campus activities, lessen the impact of rising tuition costs and decrease the need for student loans.

The Robert Clark Jordan III Memorial Scholarship Endowment is open to support from businesses and individuals. Gifts can be made to by sending a check to the University of Mississippi Foundation, with the fund’s name noted on the memo line, to 406 University Ave., Oxford, MS 38655 or by giving online at https://give.olemiss.edu.

For more information about supporting the School of Journalism and New Media, contact Jason McCormick, development officer, at jason@olemiss.edu or 662-915-1757.