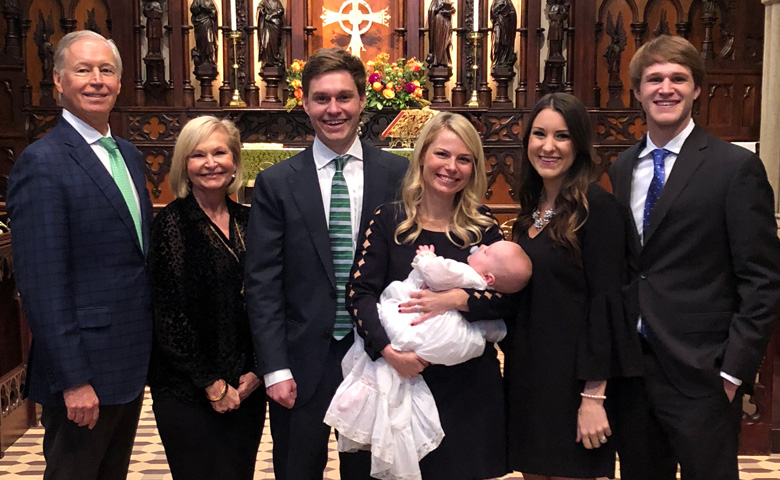 A University of Mississippi art history professor is the first recipient of a new research award that is already garnering global recognition for the College of Liberal Arts. Nancy Wicker, the award’s inaugural recipient, used the gift in September to offset expenses associated with her participation in the annual meeting of the Association of European Archaeologists in Bern, Switzerland.

“At this venue, I reported on my latest research to members of this foremost international group of scholars who study the art and archaeology of Europe,” said Wicker, whose work focuses on the art of Scandinavia during the Early Medieval Period, from the Migration Period of the fifth and sixth centuries through the Viking Age.

“Our hope is that this award will serve as a respectful way to thank those outstanding professors who are contributing to research and the sharing of ideas,” Rusty Hensley said. “We further hope that over the long term, the College of Liberal Arts will be able to attract outstanding professors to educate our students by inspiring thoughtful, relevant conversations.”

Wicker expressed her gratitude to the Hensleys and said she will proudly wear the medal that represents the award each year during commencement.

“In this time of chronic underfunding of the art and humanities, it is critical to have gifts that recognize that research is a priority of excellence at the University of Mississippi and that faculty members here can and do make a mark internationally with their research,” she said.

Born into a military family that traveled the world, Rusty Hensley attended high school in Washington, D.C., and planned to enroll at an East Coast college until he received a scholarship to Ole Miss, where he ran track for the Rebels, joined Beta Theta Pi fraternity, and met the woman he would marry.

After graduating in 1978 with a bachelor’s degree in political science, he earned his Juris Doctor in 1982 from the University of Memphis School of Law. He has since practiced law for over 30 years and is a member of the Memphis and Tennessee Bar Associations.

“Toby marched to a different drum. He was easy to recognize with his long hair and always walking around campus and the city of Oxford,” Hensley recalled. “At that time, his views were liberal but he was someone with whom you could have an intellectual conversation and respectfully share ideas. We wouldn’t always agree but we always respected each other.”

Now, Hensley serves as CEO of the Memphis-based Hartwell Foundation Corporation, which grants awards to individuals for innovative and cutting-edge biomedical applied research that will potentially benefit children. Prior to joining the Hartwell Foundation Corporation, he was managing partner of the Bogatin Law Firm and served on the board of directors of Evans Petree law firm, both of Memphis.

Recently, Hensley was selected by his peers for inclusion in The Best Lawyers in America 2019 in the fields of corporate law and mergers/acquisitions law. He also has been recognized by Super Lawyers and is AV-rated by Martindale-Hubbell.

Hensley serves the University of Mississippi on its College of Liberal Arts alumni advisory board. He also has served on the board of trustees of Christian Brothers University, where he was an adjunct law professor.

“Rusty and Missy have a lifelong commitment to the university and a very broad interest in its well-being, offering their support both in academics and athletics,” said Wendell Weakley, president and CEO of the UM Foundation and a longtime friend of the Hensleys.

“Their focus on research is something we don’t see a lot of donors get behind,” Weakley continued. “Primarily, we see philanthropy geared toward teaching because that’s what people remember from their college days. I’m intrigued by the aspect of research in philanthropy and more of our donors will be inspired by that.”

The endowment is open to support from businesses and individuals. Gifts can be made to the Hensley Family Senior Professor Research Award Endowment by sending a check to the University of Mississippi Foundation, with the fund’s name noted on the memo line, to 406 University Ave., Oxford, Mississippi 38655 or by giving online at give.olemiss.edu.

For more information, contact Ron Wilson, development officer for the College of Liberal Arts, at 662-915-1755 or jrwilso3@olemiss.edu.

By Bill Dabney and Kirsten Faulkner