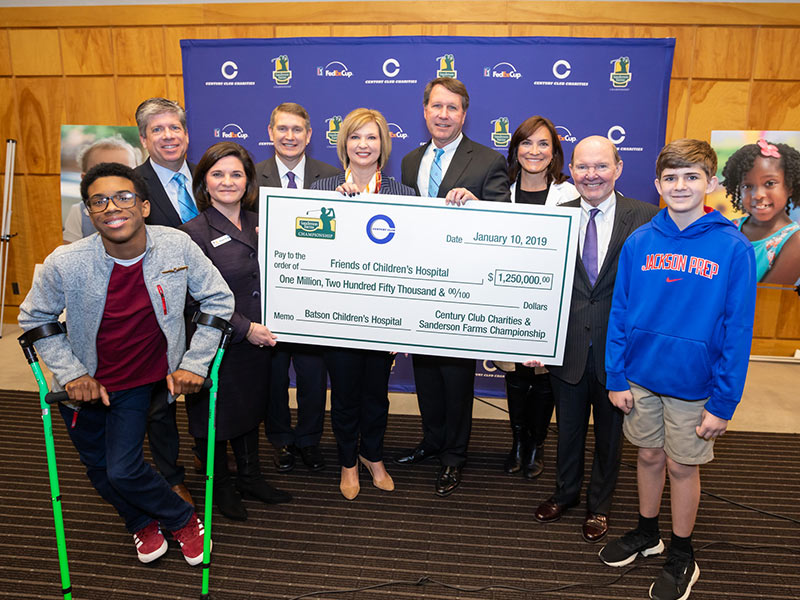 For the fifth year in a row, Century Club Charities has broken its own record, announcing a $1.25 million donation to Friends of Children’s Hospital from the 2018 Sanderson Farms Championship.

The gift will go toward the Campaign for Children’s of Mississippi, the philanthropic effort that’s helping fund a $180 million pediatric expansion at UMMC, $100 million of which will be through private donations. In two years, the campaign has raised more than $70 million.

Friends of Children’s Hospital board chair, Melanie Morgan, thanked Century Club Charities for its continued support through the state’s only PGA TOUR event.

“This incredibly generous contribution will be directed toward Friends of Children’s Hospital’s $20 million pledge to the Campaign for Children’s of Mississippi to fund this pediatric expansion,” she said.  “Friends helped fund the construction of Batson Children’s Hospital, and we are excited to build upon that legacy with this gift.”

Thursday’s announcement, made to a standing-room-only audience at the Norman C. Nelson Student Union at UMMC, was the culmination of a year of hard work, said Joe Sanderson Jr., CEO and board chairman of Sanderson Farms.

“We work 12 months to get to that eight days of the Sanderson Farms Championship,” he said, “and all of that is about today and for the next 40 years. It’s about this new pediatric expansion and the physicians, nurses, families and children who will be cared for there.”

Sanderson and his wife Kathy, since 2016, have chaired the Campaign for Children’s of Mississippi, starting out the effort with their own $10 million donation.

The vision of Century Club Charities, the Sanderson Farms Championship and its sponsors is focused on the future of pediatrics and the health of Mississippi children, said Dr. LouAnn Woodward, vice chancellor for health affairs and dean of the School of Medicine.

“This is all about the kids, and that is evident at the Sanderson Farms Championship. During tournament week, everywhere there is evidence of the purpose of the tournament, from our own faculty, employee and patients and their families who volunteer to the participants in the tournament who come to visit Batson. We are so thankful for our partners and their generosity.”

“The south side of our campus is consumed by this construction project that is well under way,” said Woodward.

The project will be in its structural phase through August, when work will move to the tower’s interior. The expansion is expected to open in fall 2020.

The tournament’s dedication to Friends of Children’s Hospital was honored in December with the PGA TOUR’s award for Best Charity Integration. The award is given each year to the PGA TOUR event that best incorporates its charitable goals into their tournament.

“Our staff and constituents have worked very hard these last five years to ensure the patients at Batson Children’s Hospital are woven into the fabric of the event,” said Sanderson Farms Championship Executive Director Steve Jent. “To be recognized as being the Best Charity Integration on the PGA TOUR is very gratifying for Sanderson Farms and Century Club Charities.”

Also announced during the event was a $125,000 donation in memory of the late Friends of Children’s Hospital board chairman Sidney Allen. A Friends board member for 22 years, Allen died in November 2018.

The 2019 Sanderson Farms Championship will be held at the Country Club of Jackson. The tournament’s date will be announced soon.

To join in the Campaign for Children’s of Mississippi, visit growchildrens.org.