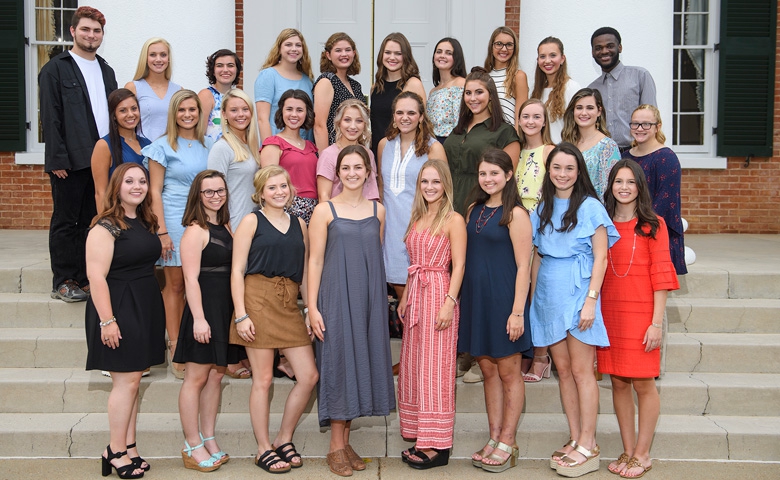 The sixth cohort of the Mississippi Excellence in Teaching Program at the University of Mississippi consists of 28 outstanding freshman from 11 states with an average high school grade-point average of 3.88 and ACT score of 29.4.

Originally designed to recruit secondary education majors, METP includes elementary and special education students and is financially supported by the Robert M. Hearin Support Foundation of Jackson. One of the nation’s most valuable teaching scholarships, METP provides up to four years of tuition, housing, living expenses, a study abroad experience and more.

“We accept high-performing students to teach in our schools in Mississippi,” said Ryan Niemeyer, METP director. “It’s a big win for the School of Education and the students, but it’s even a bigger win for our state to have these future teachers in our classrooms.

“It’s all about looking at education from a broader picture in our state.”

A joint effort with Mississippi State University, which recruits a partner cohort each year, METP was established in 2012 with a $12.9 million investment from the Hearin Foundation. The scholarship was renewed in 2016 with a second investment of more than $28 million, which will fund the program through 2021.

The program is designed to help stimulate Mississippi’s economy by creating a pipeline of top-performing students into the state’s education workforce.

After graduation, METP graduates must teach in a public school in Mississippi for five years. However, this may be postponed for up to three years if graduates wish to pursue a graduate degree.

The new class brings the number of METP scholarship recipients at Ole Miss to 132. With the second cohort graduating last May, 93 percent of program graduates are teaching in Mississippi public school districts, with the remainder pursuing graduate degrees.

Along with many other benefits, the program also includes at least two meaningful trips for the students.

Sophomores travel to Washington, D.C., each spring to study American education through a policy perspective. And each summer, rising seniors travel out of the country to experience education through different perspectives, with past trips to Finland, Sweden and Canada.

“My favorite thing about METP so far has been meeting my class and getting to know them,” METP freshman cohort member Julianne May said. “The small groups that we have and our shared interest of being great teachers makes it easier for us to connect with each other, but at the same time our group is diverse and different people are doing such different majors so we can learn from each other.”

METP is unique in that it allows members to begin classroom observations in September of their freshman year – an entire year before traditional education students begin observation.

“Being able to go into classrooms already as a freshman is really neat,” METP freshman cohort member Natalie Dixon said. “No one else except for METP gets to do that.

“The METP program really makes you think about how important it is to be a teacher and what the best ways of teaching are. It makes me appreciate my future profession more.”