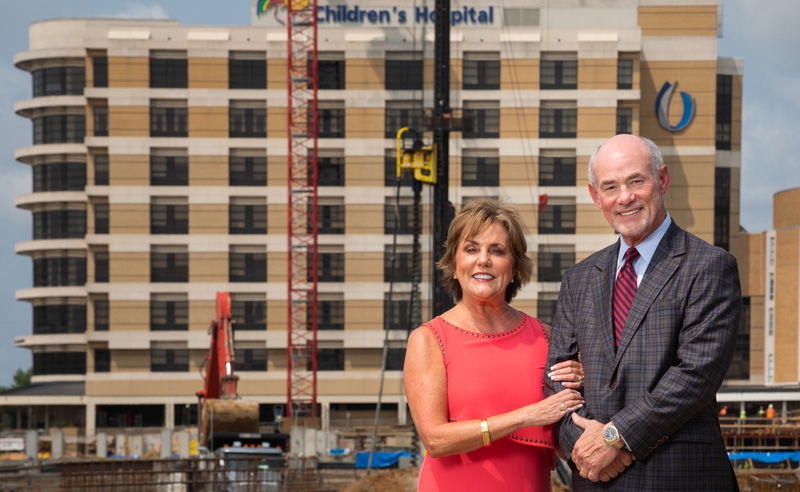 Children do tend to leave fingerprints here and there.

After raising three children and now welcoming five grandchildren as regular guests, Sanderson Farms Chief Operating Officer Lampkin Butts and wife Susie were accustomed to wiping away sticky fingerprints and admiring finger paintings. After visiting Batson Children’s Hospital each year as part of activities related to the Sanderson Farms Championship “the children there left their fingerprints on our hearts,” Susie Butts said.

After learning more about the mission of the state’s only children’s hospital, the couple made a $1 million donation to the Campaign for Children’s of Mississippi, the philanthropic drive to help pay for expansion of the University of Mississippi Medical Center's pediatric facilities now under construction adjacent to the Batson Tower.

Touring Batson as part of the Sanderson Farms Championship, said Lampkin Butts, “just opened our eyes to what this hospital means to the state of Mississippi and to the children.”

The couple learned that many children rely on Children’s of Mississippi for life-saving treatment, Susie said, “and we met the staff and saw the love they have for their patients. It’s such a special place.”

Dr. Mary Taylor, Suzan B. Thames Chair, professor and chair of pediatrics, thanked the family for their gift.

“This is a step forward in providing the kind of care any parent or grandparent would want for their children,” said Taylor. “Our medical professionals provide world-class care, but they are doing so in a hospital that has been outgrown. This expansion will be a giant step forward in the health of Mississippi’s children.”

The contributions Sanderson Farms has made to the hospital through the Championship, Mississippi’s only PGA TOUR event, have been gratifying, said Lampkin. “It is great to see this project underway and to know that Sanderson Farms and Joe and Kathy (Sanderson) have had a part in making this happen.

Since Century Club Charities, host of the Sanderson Farms Championship, announced Sanderson Farms as the tournament’s title sponsor in 2013, more than $5.5 million raised through the event has been donated to Friends of Children’s Hospital, a nonprofit group that raises funds for the state’s only children’s hospital.

This is the fourth consecutive year Century Club Charities has donated more than $1 million to Friends, which has made a $20 million pledge to the campaign. The 2017 tournament resulted in a donation of $1.2 million. The 2018 Sanderson Farms Championship is set for Oct. 22-28 at the Country Club of Jackson.

Sanderson Farms CEO and board chairman Joe Sanderson Jr. and wife Kathy helped launch the Campaign for Children’s of Mississippi in 2016 with a personal donation of $10 million and their commitment to chair the effort. Since then, the drive has raised more than $66 million toward its goal of $100 million.

Joe Sanderson said the gift from the Lampkin and Susie Butts was a surprise to him and Kathy.

“We did not ask for this gift,” Sanderson said, “so this wasn’t expected at all. It is a wonderful gift, and we are very thankful that Lampkin and Susie have joined in this effort.”

“When Lampkin graduated from the University of Mississippi, we recruited him to Sanderson Farms in sales, where I was, back in 1973,” Sanderson said. The two have worked together ever since.

While the gift may have been a surprise, the Butts' character was not, Sanderson said. “The generosity of Lampkin and Susie is not a surprise at all. They share a concern for others and a giving spirit.”

For more information or to give to the Campaign for Children’s of Mississippi, visit growchildrens.org.