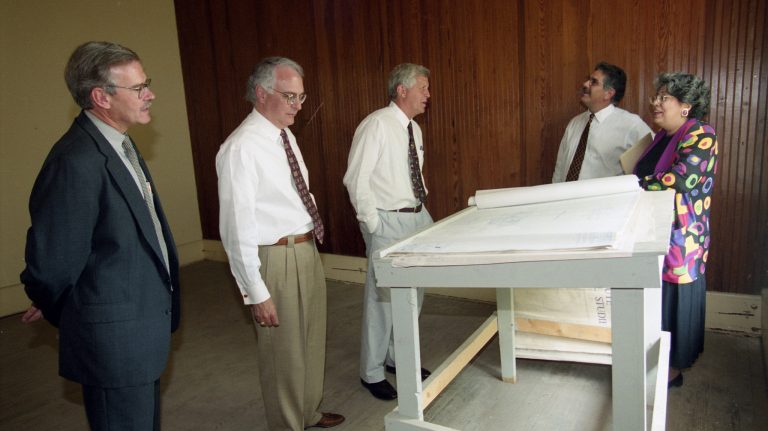 The Croft Institute for International Studies celebrates its 20th anniversary this year, but before that first cohort entered in August 1998, the institute’s story began with a man walking into an office.

The man was Gerald M. Abdalla, CEO and president of Croft LLC and chairman of the Joseph C. Bancroft Charitable and Educational Fund. The office, located in the Lyceum at the University of Mississippi, was occupied by then-Chancellor Robert Khayat.

A native of McComb, Abdalla had graduated from the UM School of Law in 1973 (where Khayat was a professor of his), earned a master’s in taxation from New York University and joined Croft Metals as corporate counsel after five years in private practice. He had been promoted to lead the McComb-based company, founded by Joseph C. Bancroft, in 1996.

Bancroft died in March 1996, but his will set up the fund, with an eye toward funding educational pursuits. And Abdalla had an idea for using some of the money, so he called his former professor, set up a meeting and soon walked into Khayat’s office in September 1996.

“He came in and we had a little conversation preceding ‘the conversation,’ and I said, ‘Well, Jerry, what can I do for you?'” Khayat recalled.

I want to give Ole Miss some money, Khayat remembered Abdalla saying.

Good, because we need it, Khayat replied.

What did you say? Khayat asked.

“It got very quiet for a moment because I’d never heard of that before – or since,” Khayat said. “I said, ‘What would you like us to do with that money?’ He said, ‘What do you want to do with it?'”

Abdalla said when he first met with Khayat, he mentioned establishing an institute incorporating majors he had studied, such as accounting, law and taxation. After he met more with Khayat, Associate Provost Carolyn Ellis Staton and other university officials, the decision was made to use the $60 million for an international studies program.

“That was foreign to me, but as far as myself and the other members of the board, we figured if that’s what the university wanted, and they were going to be there to be involved in it, we’d go ahead and do that one,” Abdalla said. “That’s what we did.”

About a year later, on Sept. 18, 1997, after negotiations and drawing up contracts, the $60 million gift – largest in the university’s history – was publicly announced, with Khayat stating the gift would create a premier international studies institute, the Croft Institute for International Studies.

“The University of Mississippi and the state of Mississippi will be forever changed by the work of the Croft Institute,” Khayat said during a press conference announcing the gift.

Twenty years later, no one can argue with the foresight of that statement. Since the institute’s inception in 1998, the program has sent its graduates out into the world, placing both UM and its graduates on the global stage.

“We have just completed a survey of our alumni, and it shows that a Croft degree opens doors to a broad range of exciting jobs all over the world,” said Oliver Dinius, Croft executive director and an associate professor of history. “This confirms that the original vision for the Croft Institute was right on target, and it is rewarding to hear directly from graduates of Croft how well its educational model prepared them for their careers, often in fields that one may not associate with international studies.

“The generous support of the Bancroft Fund and the dedicated work of Croft faculty and staff over two decades have created something unique. Croft offers an education that is at the same time specialized – command of a foreign language and knowledge about world affairs – and general by emphasizing strong writing and research skills. Prospective employers value that, and Croft truly has become a brand.”

Following this year’s Commencement, the institute has more than 500 graduates. Every year, between 40 and 50 students are expected to graduate from the institute with a bachelor’s in international studies, developing a growing network of Croft alumni that support one other and spread the reputation of the institute.

Though it was Abdalla who walked into Khayat’s office that day, plans for an international studies program had been floated earlier, by people such as Robert J. Haws, former chair of the UM Department of History, who joined the university in 1969; and Staton, who joined the university in 1977 and served as a professor and interim dean in the School of Law, associate provost and provost before her retirement in 2009. Staton died in May 2017.

When campus members begin hearing of the plans for the institute and the generous gift from the Joseph C. Bancroft Charitable and Educational Fund that would make it possible, a palpable energy began spreading on campus.

“There was tremendous excitement,” said Kees Gispen, who served as executive director of Croft from 2007 to 2016 and who has taught in Croft since its inception. “This was a dedicated program in international studies, which is something the university sorely lacked. 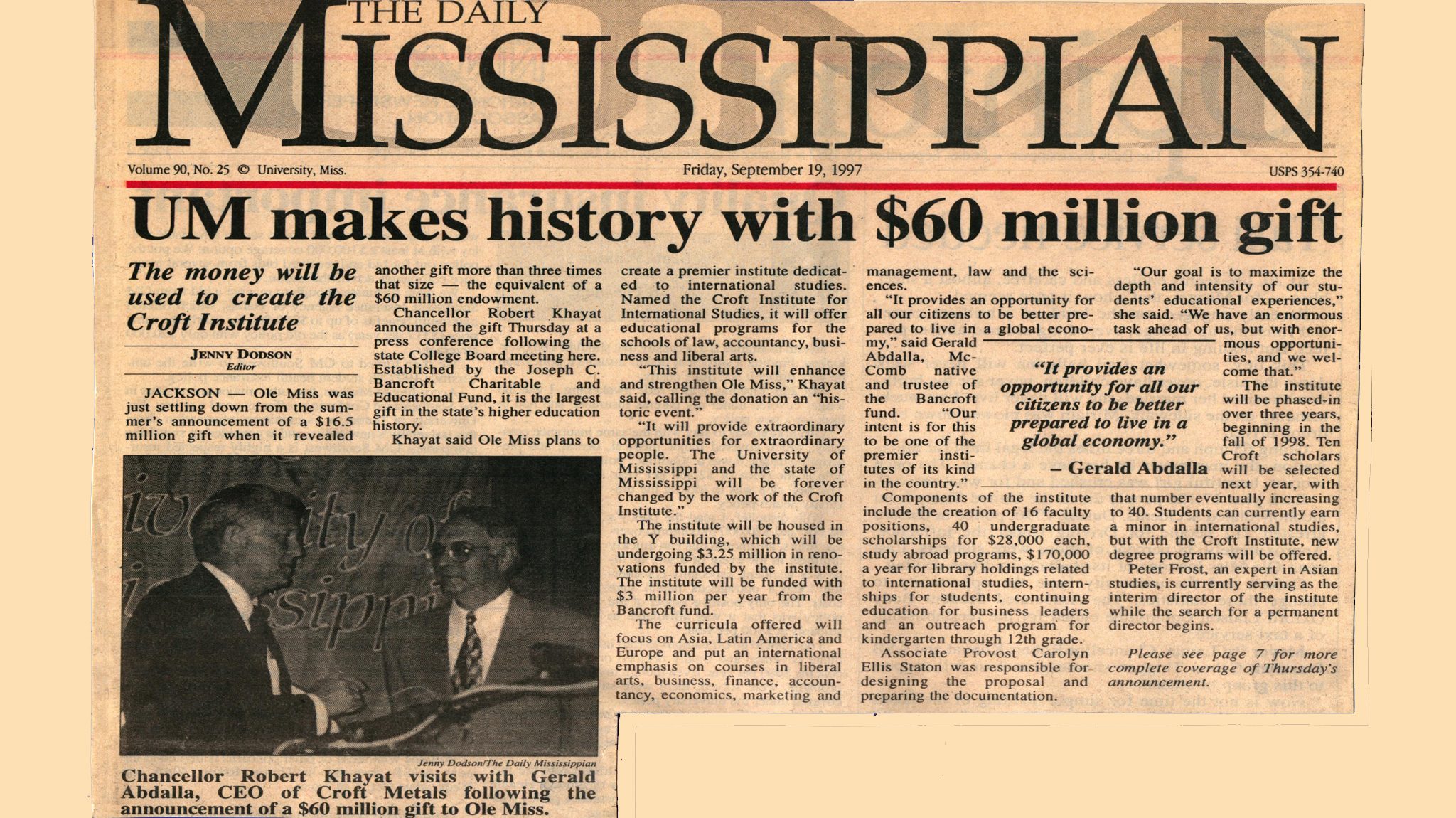 The announcement of the $60 million gift from the Joseph C. Bancroft Charitable and Educational Fund to the university to endow the Croft Institute for International Studies made headlines around the state and nation. Submitted photo

“It has historically been a pretty inward-looking school and concerned with Mississippi, and we’re always measuring ourselves in Mississippi, and the whole idea of looking beyond the boundaries of the state and, more than that, beyond the borders of the country was very innovative and exciting and electrifying.”

The students entering Croft in 1998 were educated in the George Street House, as the “Y” Building or the old chapel (built in 1853), where Croft calls home, underwent about a $3.5 million renovation, a project also funded by the Joseph C. Bancroft Charitable and Educational Fund.

Those first students entered Croft in a changing world, one shaped by globalization spreading via new trade agreements, the internet, increasing free trade, imaginative technologies and more. Croft was designed to prepare students for this new world.

Douglass Sullivan-González, dean of the UM Sally McDonnell Barksdale Honors College, was in 1998 an Ole Miss history professor who was selected to teach in Croft. He also was part of the Croft organizing team.

The Croft planners knew the importance to the institute and international studies of students learning a foreign language.

“Any diplomat will tell you that once you can understand and express yourself in the native language, you have an inside; you’re not on the outside always,” Sullivan-González said. “We envision our students obtaining positions at the highest levels in the nation as an outgrowth of this program, which would include the diplomatic corps. …

“Language carries our students farther. I would say our experiences have borne this out, especially beyond our wildest expectations. We have one of the best teaching corps in the nation here, and our students are catching prize possessions of jobs, given their language proficiencies.”

Another key decision early on required Croft students to spend at least a semester abroad in a country that speaks their chosen language, said Peter Frost, who was interim Croft director during its planning year and taught in the program for 15 years.

“I do not remember any debate over this wise decision,” he said. “Here Ole Miss faculty instantly understood what living abroad in a qualified program could do for a student’s maturity, let alone language fluency.”

Class sizes also were purposely kept small, Frost said, as “a small, carefully guided discussion group is much better at training students to think, participate and retain information than a faculty member droning on in a large, often sleepy, lecture hall.”

Also, students are required to write an honors thesis, Frost said. That senior honors thesis “is an amazing, tough and super-beneficial part of Croft that develops a close bond between the director and the student,” he said.

Jeremy Mills was an early Croft student, graduating from the institute in 2002. He works as the military program manager for the Winchester Division of Olin Corp. in Oxford.

Between the foreign language component, studying abroad and more, Mills’ Croft education distinguished him from his peers by making him adaptable, he said.

“The diversity of experiences I had and people I met while a student at the Croft translates today into me being able to adapt to pretty much any situation with relative ease,” he said. “Many people get uncomfortable and nervous with new places and people; for me, I crave those experiences.

“You never really get rid of the nervous part, but as someone told me, ‘It isn’t about getting rid of the butterflies; it is about making them fly in formation.'”

Blair McElroy also graduated from Croft in 2002 as part of the first cohort who started in 1998. As a high school student, she loved language and math and knew she wanted to study abroad, hence her decision to study at Croft.

She studied in China as part of her Croft education, and that exposure of studying and living in a different country – along with her other Croft experiences – has influenced her career.

“Majoring in international studies was incredible preparation for working in the field of international education,” she said. “The ability to communicate in another language, the intercultural communication skills gained through study at UM and abroad, and the knowledge imparted by the Croft program has given me the tools to facilitate programs in many disciplines, encourage partnerships around the world, and connect with faculty and staff on campus.”

Nearing its 20th anniversary, the Croft Institute has helped the university, the state of Mississippi and its people become players on the international stage. Powering that journey has been the Joseph C. Bancroft Charitable and Educational Fund, including a new $5 million commitment to the institute in 2016.

“Mississippi is part of the global economy just as much as any other state in the United States,” Abdalla said. “Large multinationals – such as Nissan and Toyota – and many smaller multinational companies operate in the state, and their management is looking for employees who have an understanding of the global connections in today’s economy.

“Even if they do not require command of a foreign language skill, employers like the fact that our students have experienced a different culture and know how to adapt to different practices at the workplace and beyond.

“If the United States wants to remain a world economic leader, it needs people who are truly international. … Every time a U.S. company wants to go global or expand its worldwide reach, it will be looking for employees willing to relocate to a foreign country. Students trained at Croft are ready to do that.”

Beyond moving the boundaries of the university internationally, the Croft Institute also has made UM a global destination for students.

“Having it in Mississippi is another wonderful thing … because it brings students from all over the world,” Gispen said. “People from other states have these perceptions of our state, and the more you can mix that up and bring people here and let them see with their own eyes, the more you gradually whittle down the stereotype of Mississippi.

“We’ve worked on that, and I think all of us continue to work on that. That’s a very important endeavor.”

Croft students are bright, motivated, inspired and grasp opportunity, Khayat said, and no matter where they go, they move forward as ambassadors of the university and the state, opening up a world of possibility.

“Croft … gets you focused on the larger world and gives you a chance to be a part of it.”