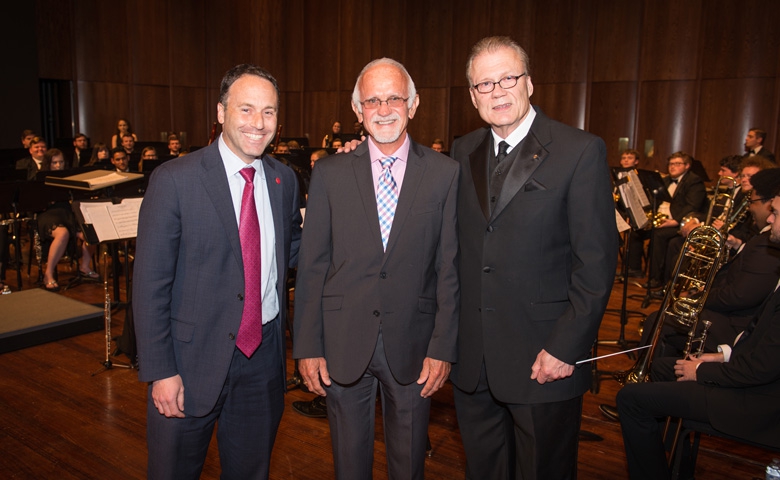 Recruitment efforts for the “Pride of the South,” the University of Mississippi’s acclaimed marching band, just gained support with a major gift for band scholarships.

“We greatly appreciate Ed’s generous gift, which will impact the lives of our student musicians for generations to come while also enabling us to make significant improvements to our program,” said Ole Miss band director David Willson.

Pegues, who earned a bachelor’s degree in music education in 1977 and a master’s degree in 1983, said he hopes his gift will give the university an edge over other Southeastern Conference schools that are able to recruit band members easier due to their proximity to larger metropolitan areas.

“Unfortunately, Ole Miss is located in a less populated area with fewer band students to recruit,” Pegues said. “It is my hope that my gift will allow Ole Miss to offer larger scholarships and recruit more talented band students from a wider area and increase both talent and numbers to match or surpass the other SEC school bands.”

Pegues started playing clarinet in sixth grade band. As his love for band grew stronger, his talent increased, allowing him to be named to the Mississippi Lions All-State Band for three consecutive years in high school. He then auditioned for and won a full-tuition band scholarship to Ole Miss.

“I was the first in my family to enroll at Ole Miss. My three younger siblings followed me to Ole Miss, as well as three of my nieces,” Pegues said, adding that his fondest college memories include his semester as drum major in 1976 and playing in the University Orchestra, “especially my experience playing in the orchestra for Ole Miss production of the musical ‘Fiddler on the Roof’ and in the orchestra for the performance of Mozart’s opera ‘The Marriage of Figaro.’”

After college, Pegues worked as high school band director for four years in Carthage, Mississippi, before returning to Ole Miss in 1981 to work on his master’s degree. He then taught high school band in Philadelphia, Mississippi, until 1986 when returned to Tupelo and joined his family’s funeral business. He and his brother, Greg, became the fourth generation to lead W. E. Pegues Funeral Directors, founded by their great-grandfather, Walter E. Pegues, in 1891.

“When I left band directing in 1986, my enjoyment for playing ended but my love for listening to a good band never diminished. To this day, I continue to buy season tickets to Ole Miss football games just to see and hear the Pride of The South perform every fall,” said Pegues, adding that he also tries to attend the Ole Miss Wind Ensemble’s spring concerts.

Ron Wilson, development officer for the band, said that, in addition to seeking financial support for scholarships, efforts are ongoing to secure private gifts to underwrite expenses associated with renovating the band’s practice field.

“This is a dire need,” Wilson said. “When it rains, the field becomes a marsh, which means our Pride of the South members have to march in the mud. We have needed to renovate the field for a long time and we can start to concentrate more on that project now, thanks to Ed.”

The William E. Pegues III University Band Programs Endowment is open to gifts from individuals and organizations. To contribute, send checks with the endowment name noted in the memo line to the University of Mississippi Foundation, 406 University Ave., Oxford, MS 38655; or visit www.umfoundation.com/makeagift.

For information on supporting the Pride of the South, contact Ron Wilson, development officer, at 662-915-1755 or jrwilso3@olemiss.edu.