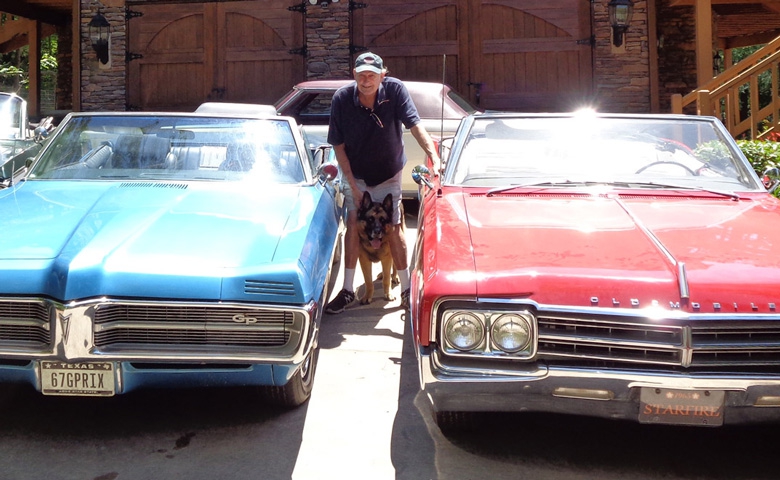 You won’t find Dr. Lyle Zardiackas working with metal implant materials at home in Texas, but he still has a grand interest in metals of the classic car type.

Since retiring from the University of Mississippi School of Dentistry in 2008, Zardiackas has spent his free time building a house and restoring a 1963 Buick Wildcat convertible, a 1965 Oldsmobile Starfire convertible, a 1967 Pontiac Grand Prix convertible and a 1970 Lincoln Continental Mark III.

Despite living nearly 400 miles away from the lab and department he founded, the University of Mississippi Medical Center Department of Biomedical Materials Sciences is still on his mind and in his heart. This year, Zardiackas established an endowment and included a bequest of up to $545,000 to ensure it becomes a fully endowed professorship.

The Lyle Zardiackas, PhD, FADM, FASTM Professorship in Biomedical Materials Science will be awarded by the dean of the dental school to a faculty member within the department responsible for education and research in metallurgy for the use of metals for biological applications. The planned gift exceeds the minimum required to create a professorship so that the endowment will provide sufficient compensation for a student research assistant.

“I set this up to support a graduate student in the field of metals for biomaterials,” Zardiackas said. “Not only to support students but to free up other money for dental students to attend research meetings. I am hoping that other people will contribute to the endowment and/or do the same kind of thing for the School of Dentistry.”

Zardiackas grew up on the South Shore in Massachusetts. His grandparents emigrated there from Lithuania. He served four years in the Air Force, which took him to southern California. He began his college education in mechanical engineering but after taking his first course in materials science he moved to northern California where he earned a degree in materials science in the school of engineering at California State University at San Jose.

It was Glick who convinced Zardiackas to continue to graduate school instead of going straight to the workforce. He chose to pursue a master’s degree at the University of Virginia and was invited by the department to continue to a doctoral degree.

After completing his Ph.D. degree in 1976, Zardiackas was invited to the school of dentistry at Ohio State University for a job interview. The invitation was largely due to an Ohio State School of Dentistry graduate, Dr. George Paffenbarger, who Zardiackas says was one of the “best known people in the world of materials research in dentistry.” Paffenbarger was also one of the founders of the IADR and a member of Zardiackas’ Ph.D. advisory committee. There he was offered a job as the director of dental materials in the school of dentistry.

“It was incredible. I'll never forget walking into my first lecture,” Zardiackas said. “I had done some teaching while I was at Virginia during my graduate program, but the biggest class was like 8 or 9 students. I walked into a classroom at Ohio State where you couldn't even see to the back of the lecture hall.”

Zardiackas remembers the time he spent at OSU as “the best job in the country.

“I also had an excellent relationship over in the School of Engineering and was working with some of the biggest names in materials science in the world. It was a really good job.”

In 1979, Stephen Bayne, who was then in charge of dental materials at UMMC wooed Zardiackas and his Texan wife to the warmer climate and closer-to-home location offered by the UM School of Dentistry. At the time, dental materials was a division within the Department of Restorative Dentistry, and remained so until the creation of the biomedical materials department by Dean Hupp.

While at UMMC, Zardiackas also was given a faculty appointment in orthopaedic surgery. He was also appointed as adjunct professor in biological engineering at Mississippi State University.

He also performed research on laminate veneers, the Maryland bridge, denture base materials, endodontic files and fluorides, much for private industry leaders such as 3M, DePuy, Synthes (purchased by Johnson & Johnson in 2015) and Proctor & Gamble.

In 2004, Zardiackas founded the Department of Biomedical Materials Science at UMMC. He then began the work to establish a graduate program within the department. Dr. Michael Roach, currently associate professor of biomedical materials science, was the first graduate of the program.

Roach, who had completed his master’s degree in bioengineering at Mississippi State, was in search of a job. Zardiackas had a position open in his lab for an engineer.

“He said, ‘Why don't you come and work in our lab while you are looking for a job,’” Roach said. “I really enjoyed the work.” Roach said that Zardiackas was a hands-on mentor who helped introduce him to industry leaders.

“He was really an active mentor in that he helped position his students for success,” Roach said. “The experience of doing the failure analysis and learning from him in a field in which he's widely considered a world expert – in failure analysis of implants – was invaluable.”

Zardiackas has requested that Roach be appointed as the first to hold the professorship designation provided by the endowment.

“He's very qualified. He's very bright, and he's very honest,” Zardiackas said of Roach. “To me, that is the most important thing of all of this: honesty, integrity, moral character. You couldn't find a better person.”

“He is just so well respected,” Roach said. “That has opened up avenues for myself for sure, and I hope to be able to pay that forward to future students.”

The Lyle Zardiackas Professorship in Biomedical Materials Science Endowment is open to gifts from individuals and organizations. To contribute, contact the UMMC Office of Development at 601-984-2300 or https://www.umc.edu/givenow/. If making a donation by check, please mail your gift to the University of Mississippi Medical Center, Office of Development, 2500 N. State St., Jackson MS 39216.