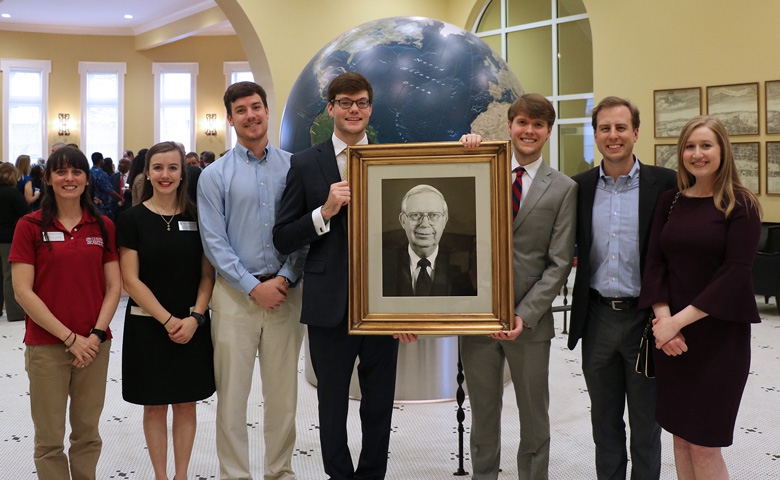 UM law students (from left) Brittany Barbee, Allison Bruff, Jack Noonan, Spencer Newman, James Kelly, Alex Heideman, and Victoria Jones, members of the Class of 2018 Gift Committee, show off a portrait of Dean Joshua M. Morse III, who is being honored by the class’ gift to the School of Law.

The Class of 2018 at the University of Mississippi School of Law has presented a class gift to the law school, setting the stage for a new tradition. Students collectively decided that their gift would honor Dean Joshua M. Morse III (LLB ’48), who challenged segregation in the 1960s.

“This was based on several factors, including 2018 as the 70th anniversary of Morse’s graduation from the law school and recognizing his great influence at the school during a tumultuous and troubled time in our history,” said Brittany Barbee, one of the leaders of the Class Gift Committee.

Morse was a pioneer who played a major role in shaping the direction of the school. His efforts included extending legal education opportunities in Mississippi, making the School of Law accessible to all people, regardless of race, gender and socio-economic status.

To honor Morse, the reading room in the Grisham Law Library will be named after him and his portrait will hang there.

So far, the committee has raised more than $3,600. Seventy-three percent of the class has given, with a goal of reaching 75 percent. The committee also secured matching gifts from alumni.

Susan Duncan, the school’s dean, commends the class on its willingness to participate in the campaign.

“I am so incredibly proud of the Class of 2018 for their initiative in naming the library reading room after Dean Joshua Morse, and I’m also thankful to them for starting this new tradition of class gifts,” Duncan said. “The fact that they are not only donating money themselves, but are also getting their gifts matched, speaks volumes to their leadership.”

The Class of 2018 includes 122 students who have grown together academically and professionally over the past three years. This departing gift is their way of leaving a legacy, no matter where they end up.

“I feel like this class gift serves two purposes,” said Ned Nelson, a third-generation Ole Miss law student and a member of the Class Gift Committee. “First, to commemorate a truly admirable figure in our school’s history and second, to establish a sense of pride in giving back to the school that has given us so much more than an education.”

Donors are encouraged to participate regardless of the amount. The final amount raised will be tripled by generous donors. Donations can be made at http://umfoundation.com/3lgiving.