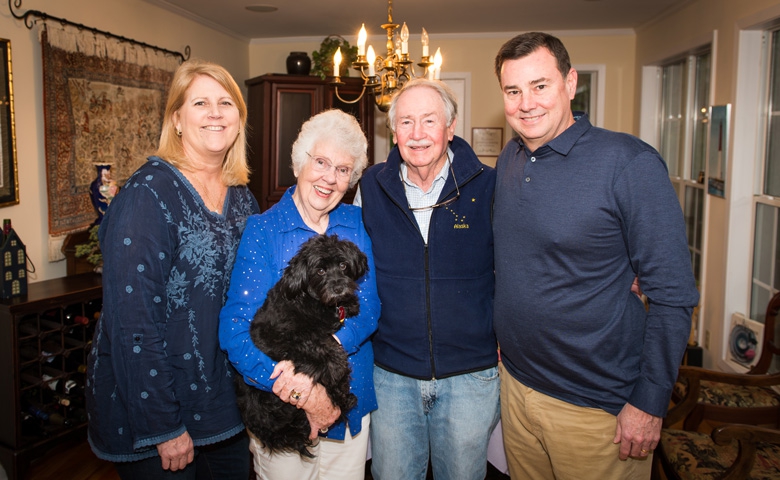 At her front door, Sandy Grisham embraces Bill and Lee Anne Fry. It’s her standard greeting whenever the Frys visit her and her husband, Vaughn.

At the University of Mississippi in the late 1970s, Bill Fry took several classes under Vaughn Grisham, professor emeritus of sociology. Their relationship has long since moved past that of professor and student to something deeper and more familial.

“Can I pour you some coffee or tea?” Sandy Grisham offers the couple. They’ve just arrived at the Grishams’ Oxford, Mississippi, home from New York City, where Bill Fry is a managing director of American Securities, a leading U.S. private equity firm. He asks for water as he walks through the kitchen to give Vaughn Grisham a hug; a time of catching up will inevitably follow.

Admiration for the Grishams recently led the Frys to make a major gift in support of the McLean Institute for Public Service and Community Engagement, housed on the university’s Oxford campus.

“It would be hard to express the enormous generosity of Bill and Lee Anne in making this gift. It’s very, very gratifying,” said Vaughn Grisham, the McLean Institute’s founding director and leader for more than 25 years.

“My breath is just taken away that someone would be that generous,” she said. “To continue the kinds of things that Vaughn has done is an absolute godsend. We’re just awestruck and very humbled by such a gift in our honor.”

Developed by Vaughn Grisham in honor of newspaper publisher George McLean — whose mission was to raise the quality of life for all Mississippians — the institute collaborates with students, faculty and staff around volunteerism, service-learning, community-based research, community development and social entrepreneurship. It then works to apply its collective knowledge to solve problems related to poverty in communities across the state. Under Grisham’s direction, it became a national leader in the field of community development.

“I know about the work that Vaughn and Sandy have done and what a difference it’s made for the people who live in those communities. I hope this gift will help expand their work to more communities and have an even bigger impact,” said Bill Fry, a Memphis, Tennessee, native. “My wife and I just thought that making the gift was the right thing to do to honor Vaughn and Sandy.”

The Frys’ gift is already being used to help support 10 different communities’ entrepreneurial efforts and to teach the residents how to start and maintain businesses.

“Mr. Fry’s financial support is key to community-campus partnerships and for these partnerships to create life-changing opportunities for students most in need,” said Albert Nylander, professor of sociology and the McLean Institute’s current director. “Mississippi and Ole Miss would have a much more difficult mountain to climb without these private funds.”

Bill Fry is a 1980 graduate of the UM public administration program. He also earned a master’s degree from Harvard Business School in 1990. Between undergraduate and graduate schools, he spent eight years in the U.S. Navy, last serving as a lieutenant in the Nuclear Propulsion Program.

“I remember looking forward to going to Vaughn’s class because I felt like I got more out of it than most of my other classes. His were classes not just about knowledge but about impact on the world and I saw in his teaching the passion he had for changing lives,” Fry said.

He also remembers being active in Phi Kappa Psi fraternity and Navy ROTC, driving cars in the Grove before football games and tutoring student-athletes — a job Vaughn Grisham helped him get.

“He’s simply brilliant. And he’s not just brilliant, but he’s just a fine human being too,” Vaughn Grisham said. “I make a special effort to try to get to know all of my students well, and there’s no question that Bill was just a special student.”

Fry joined American Securities in 2010. Previously, he was CEO of Oreck Corp. and has also helmed several entities owned by various private equity firms and public companies, holding positions as president of the Dixie Group, CEO of Bell Sports and Bell Riddell, and president of Easton Bell Sports.

For almost 15 years, he has served on UM’s School of Business Administration advisory board, which recently established a venture capital fund to provide financial support and mentorship to student entrepreneurs.

“In our state, there are things that we can and must do. We can make our communities great; we can grow our entrepreneurs; and we can make our children better educated. Those kinds of things will make the state become a better place to live over time and hopefully the McLean Institute, with its mission, can help,” Fry said.

The Frys met in Washington, D.C., and have two grown children.

In 2012, the Grishams watched with Lee Anne Fry as her husband was inducted into the Ole Miss Alumni Association Hall of Fame.

“They’re such neat people. As a couple, they’re the kind of people you want your kids to be,” Sandy Grisham said. “They have a sense of humor. They don’t take themselves too seriously. They’re both extremely bright and extremely successful in their various fields, and I consider it an absolute blessing to be friends of theirs.”

To support the efforts of the McLean Institute, you can make a gift by visiting www.umfoundation.com/makeagift or contact Denson Hollis at 662-915-5092 or dhollis@olemiss.edu.