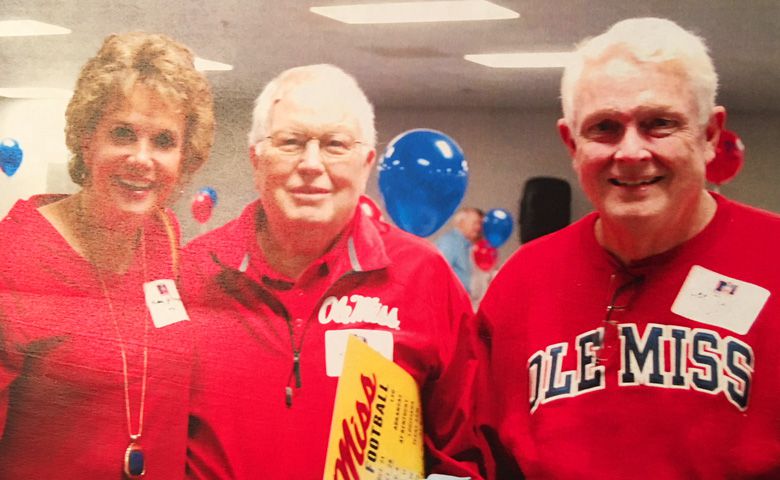 Friends and family members of the late Richard E. “Dick” Atkins of Corinth, Mississippi, describe the University of Mississippi alumnus as “uncommonly gracious and generous.” These character traits are substantiated by Atkins’ desire to bequeath financial support to his alma mater.

The UM Foundation recently announced a gift of $100,000 from Atkins’ estate — portions of which are designated to support scholarships within the School of Business Administration, the School of Education and Ole Miss Athletics.

“It’s in his personality that he would want to give scholarships because that would help change lives for students and helping people was always his heart’s desire,” said Atkins’ nephew, Jeff Brawner of Corinth. “He acknowledged that God had blessed him in his life and he felt it was his responsibility to try to bless others.”

Atkins, who played bass drum in the Pride of the South marching band, graduated with a bachelor’s degree in business administration from Ole Miss in 1965.

“Mr. Atkins’ gracious gift has enabled us to establish an endowment in his name. The Richard E. Atkins Memorial Scholarship will honor him in perpetuity while ensuring that generations of our students receive financial assistance to support their education,” said Ken Cyree, dean of the School of Business Administration. “We greatly appreciate his gift.”

After earning his degree, Atkins returned to Corinth, where he taught junior high and high school students, first at Gift Community School and later in the Kossuth, Mississippi, school system. While at Kossuth, he met and married fellow teacher Betty Gwyn Atkins.

“Dick Atkins obviously had a deep interest in quality education and his gift will go a long way toward ensuring that we provide that to our students. We are very grateful for his foresight in naming the School of Education as a recipient of his planned gift,” Dean David Rock said.

Changing careers in 1972, Atkins joined Gould, Inc., (later to become Vendo, Inc.) as personnel manager. After seven years, he began a third career as administrator at Alcorn County Care Inn, which later became Mississippi Care Center. He served in this capacity for 20 years, retired briefly and returned to work in 2001 as a director of acquisition and development for J&A Management, a property management company. Atkins retired permanently in in 2009.

A tireless volunteer and community supporter, Atkins was a Rotarian, serving as president, and a Paul Harris Fellow. He served on the boards of directors of United Way, the American Red Cross, the Boys Club, the Corinth Welfare Association (president) and the Mississippi Health Care Association (vice president, secretary and treasurer).

Throughout his life, Atkins was an avid Rebel fan.

“We spent about the last 30 years going to football games. Every game day, we would get up before daylight and leave for Oxford and then spend the whole day in the Grove,” said Don Morgan of Corinth, Atkins’ brother-in-law and close friend. The two even spent six months designing and building a rolling cart that easily converts into a picnic table — a contraption that became the envy of their neighbor tailgaters.

“The thing about Dick that I remember mostly was that he was just so loyal. It didn’t matter what Ole Miss was doing, he was always so supportive,” Morgan said. “He was never negative about anything when it came to the school. He really, really loved Ole Miss. Dick was just a wonderful person, and we really miss him.”

Because of his loyalty, Atkins supported the university consistently through the years; now, his legacy continues.

“On behalf of Ole Miss Athletics, I’m grateful to devoted Rebel fans like Dick Atkins who want to see our program continue to excel and grow,” said Keith Carter, senior associate athletics director for development and executive director of the Ole Miss Athletics Foundation. “Mr. Atkins’ gift to the Vaught Society will give our student-athletes and coaches the opportunity to succeed at the highest level.”

Atkins also was active in his church, where he gave financial support to many ministries and served as a deacon and later as an elder, a Sunday School teacher and a faithful 60-year member of the sanctuary choir.

Though Atkins had no children, the youth in his community considered him a surrogate grandfather, often turning to him for a sympathetic ear, a comforting hug, wise advice or even an afternoon snack.

For information on designating a deferred gift to Ole Miss, contact Sandra Guest at 662-915-5208 or sguest@olemiss.edu.