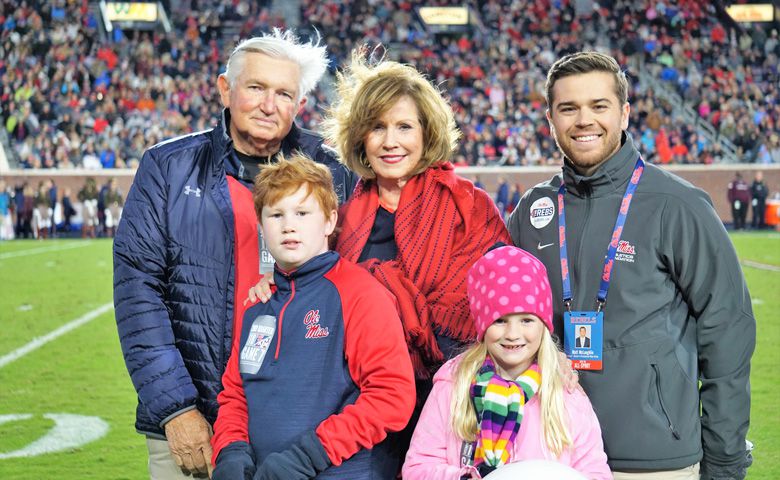 UM alumni Doug and Jane Simmons, however, know it ends at Gate 4 of Vaught-Hemingway Stadium, just beyond Letterwinner’s Walk. That’s where new signage, displaying the Simmons name, will serve as a lasting tribute to the Hollandale, Mississippi, couple’s recent major gift in support of Ole Miss Athletics.

The gift is part of the Ole Miss Athletics Foundation’s drive to honor donors with naming opportunities for each of the entrance gates at Vaught-Hemingway Stadium and the Pavilion at Ole Miss, the Rebels’ basketball arena.

“The Gate Naming Initiative is the first of its kind and will play an integral role in completing the $200 million Forward Together campaign,” said Keith Carter, senior associate athletics director for development and executive director of the Ole Miss Athletics Foundation. “With $173 million raised toward a multitude of capital projects, the final phase of the campaign will see the opening of an indoor tennis facility this December and completed renovations at Oxford-University Stadium (baseball program) in early spring.”

Matt McLaughlin, a development officer with the Ole Miss Athletics Foundation, said he hopes the Simmons couple’s gift will inspire similar support for the campaign.

“Now, more than ever, it’s critical for Rebel fans to give back,” McLaughlin said. “We greatly appreciate Doug and Jane for stepping forward in support of Ole Miss. Their generosity will help to significantly improve our facilities, giving our student-athletes the competitive edge they deserve.”

Naming opportunities remain available for the grand gates at the north, east and west entrances as well as a limited number of individual gates. Earlier this year, the stadium’s south entrance was named for Diane and J.L. Holloway after the Ridgeland, Mississippi, couple supported the Forward Together campaign with a major gift.

For more information about the Gate Naming Initiative, contact the Ole Miss Athletics Foundation at 662-915-7782 or visit http://givetoathletics.com/gates.