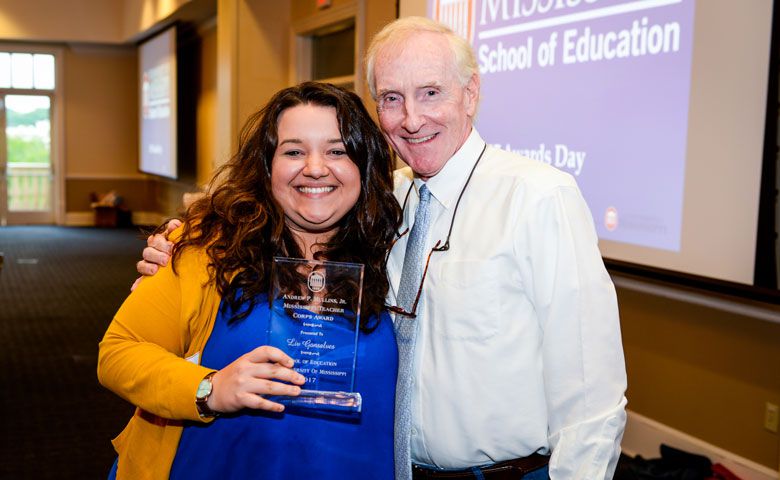 Each year at the University of Mississippi, five students are honored for exceptional teaching, service or school leadership in the name of a family with strong ties to both UM and public education in the state: Mullins.

Established in 1999 with a $100,000 gift from UM benefactors Richard and Diane Scruggs, the Ike and Elaine Mullins Education Endowment was originally designed to honor two UM School of Education students each year in the areas of educational leadership and mathematics education. The Andrew P. “Ike” Mullins Award (leadership) and Elaine Deas Mullins Award (math education), were first awarded respectively to MeLynda Crockett and William Roberson in 2000, when each student received a plaque and a $500 gift.

“(The Mullins Family) is a very special one,” explained Diane, reflecting on her and Richard’s gift nearly two decades ago. “They all worked very hard to improve everyone around them. I hope that by extension the recipients of these awards continue to do this in kindness, and give back to others.”

Today, the endowment has seen exponential growth within the UM Foundation and is worth more than $163,000—an increase of more than 63 percent in 18 years.

Each year, all five honorees now receive $700 each.

Last May, Ben Logan, a 2017 graduate from the UM School of Education and mathematics teacher at Oxford High School, received the Elaine Deas Award.

“Receiving a Mullins family award was a great honor to me,” Logan said. “Dr. (Andrew P. Mullins, Jr.) served as a reader for my honors thesis and told me about how the award was named after his mother. Receiving this award was a great way to start my career in teaching.”

The Mullins Endowment is an example of how lasting gifts can grow and increase their value and impact over time. This particular fund has grown primarily on the strength of the Scruggs’ original donation and has consistently paid out annual gifts to UM education students throughout the life of the endowment.

“I’m very proud of these awards and I enjoy meeting the recipients each year,” said Andrew P. Mullins, Jr., retired UM chief of staff to the chancellor and co-founder of the Teacher Corps. “I think it’s important to recognize the accomplishments of teachers, who don’t always get a lot of recognition.”

Elaine and Ike Mullins, who lived in Macon, were Diane Scruggs’ aunt and uncle and played an important role in her life, especially after the death of her mother when she and her five siblings were still children. Elaine was a high school mathematics teacher in Webster and Noxubee counties and Ike, a 1929 graduate of UM, owned and operated Mullins Hardware for nearly 50 years and was an ardent supporter of public education and educators in Mississippi.

“We were extremely close to Aunt Elaine and Uncle Ike,” Diane said. “Their home was the center of family gatherings and when my mother passed away, that relationship was still there. It was to the point that (Aunt Elaine) stood in for my mother when I was married. She was a special lady and an educator.”

Lisa Lee Mullins, wife of Andrew P. Mullins, Jr., taught first grade in Mississippi schools for more than 30 years and made an impact on thousands of students in her career, particularly in the area of reading. Sylvia Mullins Tart, Elaine and Ike’s daughter, is a longtime advocate for those with special learning challenges.

In addition to his roles at UM, Andrew P. Mullins, Jr., who earned a Ph.D. in education from UM in 1992, started his career as a high school history teacher and later served as a special assistant to two Mississippi governors and three state superintendents of education. Today, he still serves an education professor and the assistant director of the Teacher Corps.

Each May, at the UM School of Education’s annual awards ceremony, he goes out of his way to have his photo taken with each new Mullins Family Award recipient.

He explained that he is always proud to honor young people who are going into the education profession in Mississippi.

“I always have a soft spot in my heart for teachers,” he said. “I hope these award winners will take this gift and enhance their education or teaching ability with it.”

The Mullins Family Endowment is open to gifts from individuals and organizations. To contribute, send checks with the endowment name noted in the memo line to the University of Mississippi Foundation, 406 University Ave., Oxford, MS 38655; visit www.umfoundation.com/makeagift or contact Billy Crews at 662-915-2836 or wlcrews@olemiss.edu.