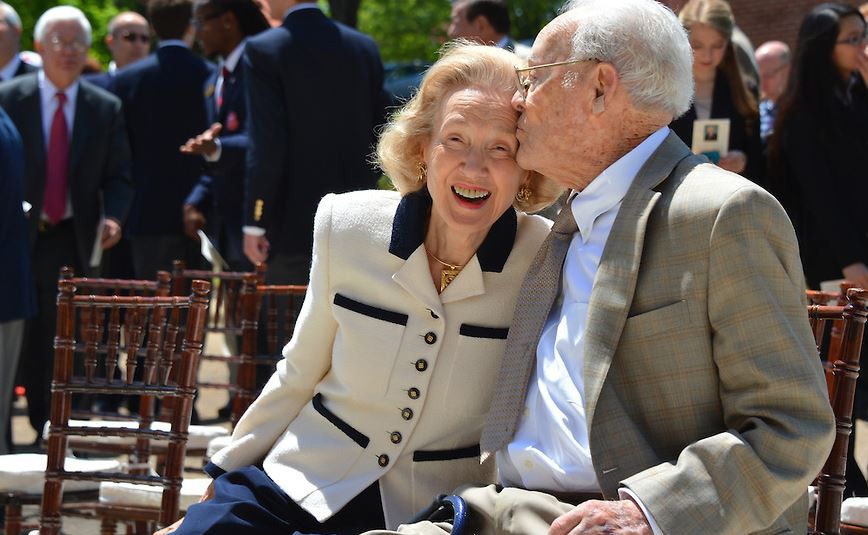 Mary and Lucian Minor share a moment during the dedication of Minor Hall on the Oxford campus in 2013.

A recent $6.3 million gift from the estate of alumnus and University of Mississippi supporter Lucian S. Minor will establish a new chair within the Patterson School of Accountancy while also providing scholarships and supporting the school's academic programs and activities.

Dean Mark Wilder said the Lucian S. Minor Chair of Accountancy Endowment will support the recruitment and retention of outstanding faculty to ensure that quality teaching, research and service will be available for generations of UM students.

“We are extremely grateful to Lucian Minor for his foresight to include the Patterson School of Accountancy in his estate planning. The generosity of Mr. Minor will enable us to ensure a quality education for students through scholarships, faculty support, and operating funds for our program,” Dean Mark Wilder said. "We are honored to have the Lucian Minor name and legacy forever associated with the Patterson School of Accountancy.”

“He was a remarkable individual whom I was very proud to have known well for many years,” said Larry Hardy of Memphis, Tennessee. Hardy earned a bachelor’s degree in business administration from Ole Miss in 1968 and a master’s degree in accountancy in 1969. Minor hired Hardy to work for him at Ernst & Young right out of college.

“To have worked with him and then to have known him personally after working with him … he just became a really good friend,” Hardy said. “I was so pleased that he chose Ole Miss and the School of Accountancy to be the beneficiary of his will.”

A UM residence hall bears the Minor name — an honor awarded the couple in 2013 to acknowledge their generous and continued financial support.

“I’ve enjoyed my relationship with Ole Miss for many, many years,” Minor said at the time. “Many of the courses I took at Ole Miss contributed to my success in the business world, particularly the accounting field. I’m glad to share some of my success. Hopefully, some needy students will benefit from our gifts.”

Minor graduated from Ole Miss in 1937 with a degree in accounting. He was recruited by General Mills, Inc. to join the company’s internal audit staff in Minneapolis, Minnesota, where he worked until beginning his service in the U.S. Navy in 1942.

He was stationed with Douglas Aircraft Co. in Los Angeles as a cost inspector and passed the CPA exam during his enlistment.

He served as a mentor to young professionals like Hardy all his life.

“I’m glad now to see his name around campus on the building and on the scholarships that have been given out every year and soon to be associated with the chair of accountancy,” Hardy said. “I’m very pleased that he was able to do all that and pleased that he did it.”

Minor’s nephew Jim Moore of Memphis, Tennessee, said his uncle’s decision to give back to the university likely stemmed from his upbringing.

“He came up during the Depression, so he was able to go to college when it wasn’t easy and he knew how his own education helped him in his life and career,” Moore said. “He always had a strong desire to help people who wanted to get an education and improve themselves. He was very supportive of those who really wanted to work to get ahead. Also, he loved the accounting profession and was very dedicated to that.”

Moore said Minor enjoyed watching Rebel football, playing golf and entertaining friends while hunting quail and other game birds at his family’s Circle M. Ranch near Macon, Mississippi (his hometown) and later at his farm “the Old Rainey Place” near Blue Mountain, Mississippi. Additionally, he was a member of Menasha Hunting and Fishing Club in Arkansas for over 50 years and the Memphis Hunt and Polo Club.