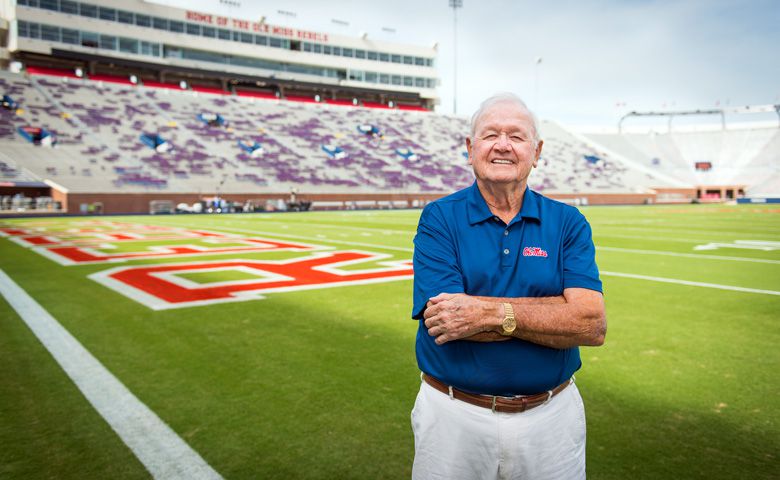 Dr. Gerald M. “Doc” Hollingsworth, a Mississippi native and Ole Miss alumnus, has devoted a lifetime to taking care of his patients, monitoring the health of high school athletes, championing competition for intellectually challenged youth and providing major resources for his alma mater’s athletic programs. For these reasons and more, he will receive the 2018 Legacy Award from the Ole Miss Women’s Council for Philanthropy (OMWC).

The prestigious award recognizes those who have a lifework of mentoring, leadership, scholarship, and/or philanthropy — characteristics promoted and encouraged by the OMWC. All of these are descriptive of Hollingsworth, a resident of Niceville, Florida. The physician and businessman has mentored many young people and attributes his own successful medical career to mentors in his life.

“Dr. Earl Fyke of Centerville, Mississippi, asked me to go on house calls with him and then shadow him at the hospital,” Hollingsworth said. “He was trying to encourage my interest in medicine. He actually demanded that I attend the University of Mississippi. I was already on the campus of another Mississippi university, and Dr. Fyke came and got me. He provided the necessary resources and necessities for me to attend Ole Miss and be successful.

“The other mentor in my life was Dr. Arthur Guyton — author of the world’s most widely used medical textbooks — who steered me to Harvard University for medical school after I finished Ole Miss. Dr. Guyton and Dr. Fyke were the two most influential people in my life, as well as my mother, Irma Blakeney Hollingsworth, who gave me unconditional love and support and made me believe I could achieve my dreams.”

Now the OMWC will recognize Hollingsworth for being influential in the lives of many others.

“The far-reaching impact of Dr. Hollingsworth’s service and philanthropy will be felt for generations to come,” said Mary Donnelly Haskell of Oxford, Mississippi, chair of the OMWC. “He devoted almost 35 years to serving as the team doctor for Choctawhatchee, Ft. Walton Beach and Niceville high schools. He helped found the All-Sports Foundation of Northwest Florida and helped establish the first chapter of Special Olympics in Florida.

“’Doc’ Hollingsworth, as he is affectionately called, also has generously provided private gifts to ensure that Ole Miss Athletics programs have the resources to provide student-athletes with outstanding opportunities and facilities, as well as enhance experiences for Rebel fans.”

Hollingsworth said he believes in athletic competition on all levels for its many benefits: “It develops the mind, body and personal confidence, giving athletes a sense of accomplishment. It expands participants’ horizons, helps them meet people and make friends — competition adds spice to life! In the awards given by the All-Sports Foundation of Northwest Florida, we have recognized high school, college and pro competitors—such as Danny Wuerffel, a Heisman Trophy winner.

“I also absolutely loved the idea of Special Olympics when I first heard of the organization,” he continued. “And when Charlie McFarland and I brought the competition to Florida, seeing the beaming faces of those young people was so moving. The participants competed for the joy of competition and that should be the primary goal of sports; it’s not just about winning.”

The April 14 Legacy Award sponsor reception and dinner will be in Vaught-Hemingway Stadium, where the field is named for Hollingsworth. C Spire — a diversified telecommunications and technology services company and the nation’s largest privately held wireless provider — will again be the presenting sponsor for the event. Many other sponsors will be announced in the coming weeks.

Now retired, Hollingsworth saw much success not only with his medical practice but also with automobile dealerships and a real estate company. After completing a surgical residency at Duval Hospital in Jacksonville, Florida, he was a U.S. Navy flight surgeon from 1957 to 1959. The physician began his private surgical practice in Ft. Walton, Florida, in 1960. In 1968, he served as a volunteer physician with Project Hope in Da Nang, Vietnam, treating civilian battle casualties. For many years, Hollingsworth also was a medical examiner for the Federal Aviation Administration.

The Legacy Award joins a list of other honors bestowed on Hollingsworth. The Ole Miss chapter of the National Football Foundation and Hall of Fame honored him with the Amateur Football Award for contributions to the collegiate athletic world. The All-Sports Association of Northwest Florida honored him with its Community Service Award, and he was inducted into the Ole Miss Alumni Hall of Fame. In 2015, the longtime donor committed $25 million — the largest gift in the history of Ole Miss Athletics — to support the Forward Together campaign and create the Gerald M. Hollingsworth, M.D., Athletic Scholarship Endowment.

When asked about his major support of Ole Miss, Hollingsworth explained: “I love the school so much. Ole Miss took a shy, awkward young fellow and turned him into someone with enough confidence to achieve the things I have achieved. I will never forget what Ole Miss has given for me, the educational foundation and the outstanding experiences.”

Honoring the physician and philanthropist is the OMWC, which was established in 2000 by a group of female leaders and philanthropists. The Council awards scholarships to both young women and men based on their academic performance, desire to give back to society and successful interview process. Council members are committed to nurturing the development of the students through mentoring, leadership development, cultural experiences and travel opportunities.

In its 17th year of existence, the OMWC scholarship endowment stands at more than $13.1 million. The $32,000 named scholarships are awarded each year and have grown to be among the largest on campus. Thus far, 119 OMWC scholars, including 26 current students, have benefited from the program.

Roane Grantham of Oxford, the OMWC member chairing the Legacy Award event, said: “This year we are so excited to award the OMWC Legacy Award to Dr. Hollingsworth, who has been a deeply committed philanthropic supporter of Ole Miss as well as a huge advocate of high school athletes on the Florida Panhandle. Because Hollingsworth Field at Vaught-Hemingway Stadium bears his name, we will host this celebratory event in the South End Zone Club with an exclusive sponsor event just prior in the Field Club.

“This annual signature event of the Women’s Council and in the life of Ole Miss would certainly not be possible without the generous support of our sponsors, and we encourage others to become part of this rewarding program,” Grantham said. “We will honor all sponsors and our Rose Society members on April 13, on the eve of the Legacy Award event.”

Sponsorships, preferred tables and individual tickets are available for this traditionally sold-out Legacy Award event. For information concerning sponsorships ranging from $5,000 to $20,000, award dinner tickets or Rose Society membership, contact Nora Capwell with the OMWC at 662-915-2384 or ncapwell@olemiss.edu. Information on the Women’s Council can be found at www.omwc.olemiss.edu.