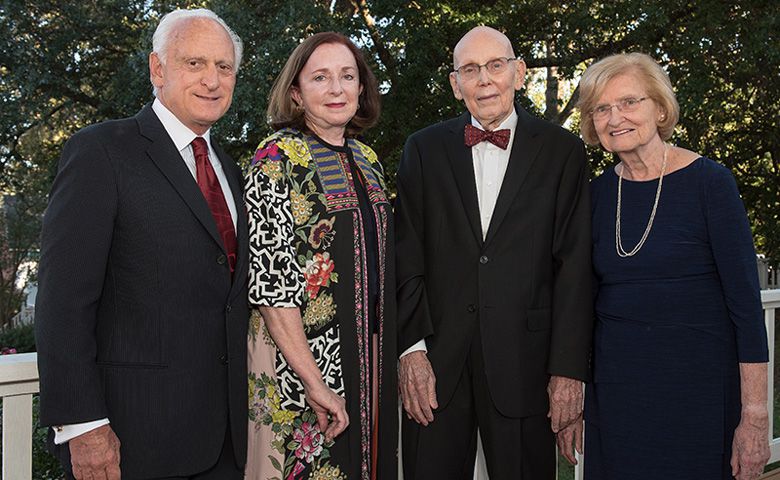 Drs. Frank and Ann Critz, from left, with Drs. Richard and Suzanne Miller, whom they honored with a $2 million gift used to establish chairs in the Millers' areas of specialty: surgery and pulmonology.

Inspired by their work with the Millers while they were residents, the Critzes, based in Atlanta, established the Dr. Richard C. Miller Pediatric Surgery Chair and the Suzanne T. Miller Pediatric Pulmonology Chair. Both endowments will support educational opportunities for faculty, residents and students in these areas, as well as research in pediatric surgical techniques and pediatric pulmonary diseases, plus recruitment and training of physicians and faculty members.

“When Dr. Richard Miller came, care for newborns absolutely changed,” said Ann Critz, who recently retired from her position as an associate professor of pediatrics at Emory University. “And back in those days, there was not a lot to offer patients with cystic fibrosis. … Dr. Suzanne Miller was very involved with those patients and families.”

The Critzes, who married during their second year of medical school, earned their medical degrees at UMMC in 1969. Frank Critz, a radiation oncologist, is known for establishing Radiotherapy Clinics of Georgia in the Atlanta area.

“This was a total surprise,” said Richard Miller of the chairs. “We did not expect anything like this at all.”

Richard Miller was instrumental in caring for his patients and was crucial to the administrative part of the hospital. He served as the interim chair of anesthesiology twice, the interim chair of the department of surgery, the associate dean for clinical affairs, and the medical director of University Hospital, all while still seeing patients.

Suzanne Miller dramatically changed the way cystic fibrosis patients were treated. Prior to her arrival, a monthly clinic was available to CF patients, but no one on staff was fully devoted to their care.

“We intensified home care for our CF patients and saw patients more frequently,” she said. In 1969, there were about 30 cystic fibrosis patients. By 2013, there were at least 200.

“Sue and I worked hard for long hours and seven days a week,” Richard Miller said. “I enjoyed caring for our patients as well as our four children at home.”

“They each had an extreme devotion to their patients,” Ann Critz said. “They each had a steadfast determination to give each child the best care possible.”

Nearly 20 years later, Dan McInnis, manager of printing at UMMC, still recalls Richard Miller’s dedication to his fourth child, Zachary. At the first ultrasound, Zachary was diagnosed with a diaphragmatic hernia and they were told to go to UMMC for the best care.

“I immediately called Dr. Miller,” McInnis said. “He was such an icon here. He had the reputation of being the go-to guy. He returned my first call within an hour and met with me that same day.”

Richard Miller was on standby for Zachary’s birth and said they would operate as soon as Zachary was stable enough. He had a black-tie event that night, but returned afterward, still wearing his tuxedo, to check on his patient.

Around 9 a.m. the next day, the doctor decided Zachary was ready. The surgery was successful, but because of the severity of his condition, Zachary remained in the neonatal intensive care unit for two months.

“I truly believe that had we waited until Zachary was fully stable, he wouldn’t have survived,” McInnis said. “To me, he’s one of the best doctors ever in the children’s hospital, as far as surgeons go. He was awesome.”

McInnis is not the only one who holds the Millers in such high regard. Dr. Mary Taylor, interim chair of pediatrics at UMMC, recently spoke of Suzanne Miller’s legacy.

“Dr. Miller’s legacy is one of sincere compassion for her patients and a relentless drive to improve the quality of care and treatment,” she said. “The Suzanne T. Miller Chair in Pediatric Pulmonology is a testament to Dr. Miller’s incredible legacy in pediatric medicine.”

One of the Millers’ former students is Majure, who holds the chair named for Suzanne Miller.

“As medical students, we were all amazed at the dedication that both of the Millers had to their patients. They were always there when anyone needed them,” he said. “It was not until after I left Mississippi and got to know pediatric pulmonologists and pediatric surgeons around the country that I realized that these two physicians were held in high esteem not just by us who knew them in their everyday practice, but also by their colleagues all across the country. I am a better physician for having known and worked with them.”

Ann Critz hopes this gift will help UMMC recruit and retain faculty who are devoted to patient care and to finding innovative directions for their specialties, like the Millers were.

Said Suzanne Miller: “One of the goals of the university is to improve the health of the adults and children in our state. This gift will help improve care throughout Mississippi.”