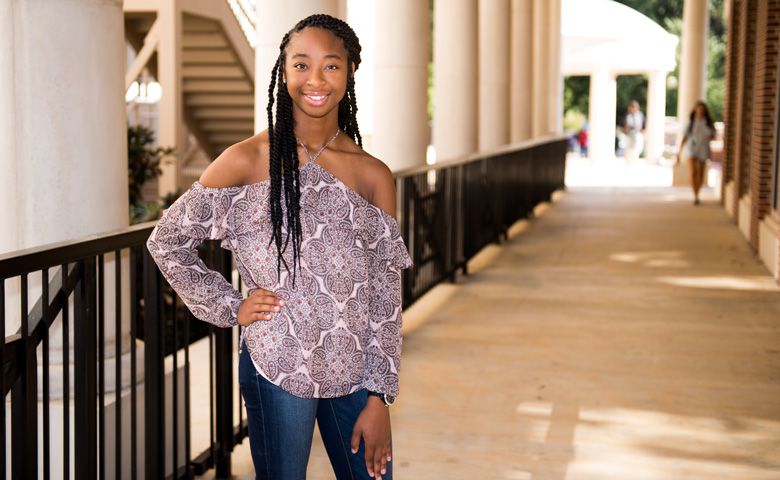 In receiving this year’s Joey Embry Scholarship, University of Mississippi freshman Lori Wilson carries on the legacy — and in many ways, the spirit — of the student-athlete who died tragically in 1998, just months before he was expected to be a major contributor on the Rebel offensive line.

According to Bobby Killion, Embry’s teammate, “Joey touched the lives of so many people while having an influence on those who came in contact with him.”

The same can be said of Wilson. The Water Valley, Mississippi, native has always worked hard to make life better for those around her. For example, when she realized her high school was struggling to overcome negativity, she organized and led a booster committee, encouraging her fellow seniors and some juniors to serve as mentors for younger students.

“I was like, ‘Maybe we can do something to fix things,” Wilson recalls. “I said, ‘Let’s put fun back into school and show these kids that you don’t have to sell drugs or be that type of person’ because a lot of the younger kids were heading toward the wrong path. So I thought it would be a good idea to get the seniors — the ones on the honor roll and those that participated in all the clubs — to come together and show the younger students that it starts with us; we can change things. And it turned out so great.”

Wilson also was involved in the music, art, family consumer science and Beta clubs. She served on the student council and supported the athletic teams as a cheerleader. In her free time, she volunteered at the local nursing home.

“I got to talk to a lot of the people there,” she said. “You learn a lot from them. They have so much to tell. I always connected with them.”

Now, at Ole Miss, Wilson is majoring in exercise science because it will be a good foundation for the nursing degree she hopes to attain on her way to becoming a doctor — a logical career path for someone like Wilson whose desire has always been to help others.

But one step at a time, says Wilson who also received a Luckyday scholarship and was selected for the university’s FASTrack program, which provides freshmen an enhanced learning environment. Just weeks into her freshman year, Wilson is already finding ways to make a difference. She’s active in two networking organizations and the student organization E.S.T.E.E.M. (Educated, Successful, Talented, Evolving, Empowered, and Motivated), a club for minorities that works to boost women’s confidence.

She gets her motivation from her role model.

“I never see my mom cry,” Wilson said. “She’s a very determined person. I always have aspired to be like my mom, strong-willed. And she always fixes things.”

They have that in common.

“All the things I went through and all the things I saw in my community and in my school just made me want to be the fixer,” Wilson said. “I realize I can’t fix everything but I definitely try. I’m a perfectionist and try my best to help in any way I can.”

Gwen Embry, Joey Embry’s mother, said she and her husband, Bill, are pleased that the scholarship was awarded to someone who obviously shares their son’s spirit.

“Joey gave everything for there to be this scholarship and we want to make sure it’s used to the best of its ability — that the students will devote their time and efforts to school and keep their priorities in the right direction,” she said.

Wilson said she’s honored to receive the scholarship and understands its gravity.

“Just to know that I got the scholarship, I feel very heartened by it,” she said. “I’m honored to carry on Joey Embry’s legacy. I always try to do my best here at Ole Miss.”

Since the Embrys have lived in Calhoun and Yalobusha counties, they offer the scholarship in each geographical area. Students interested in applying for the scholarship should speak with their high school guidance counselor.

Individuals and organizations can contribute to the Joey Embry Memorial Scholarship Fund through the University of Mississippi Foundation, 406 University Ave., Oxford, Miss.; phone 800-340-9542; or online at http://www.umfoundation.com/makeagift.