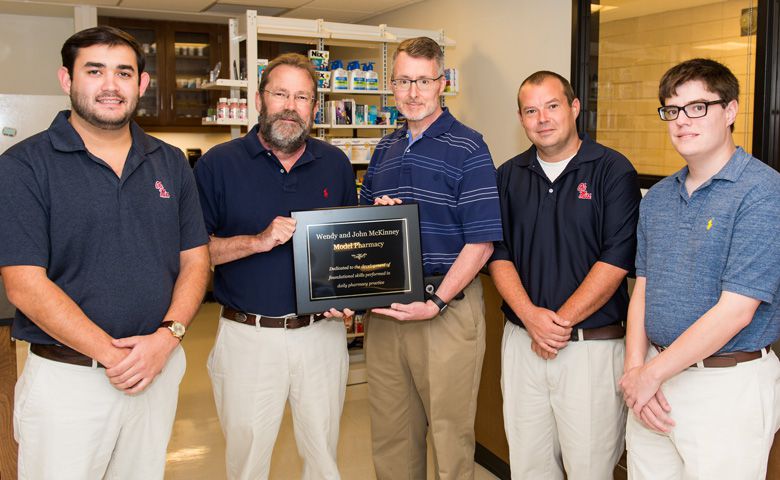 Karen Redmond is seated on a swivel stool at the soda-fountain counter of Burnham Drugs in Moss Point, Mississippi, enjoying a plate lunch and a chocolate shake. The local woman and her husband, David, are regular customers of this timeless place.

With cozy red-vinyl booths, a checkered floor, Coke floats made with hand-dipped ice cream and servers who’ve never met a stranger, it could just as easily be 1950 as 2017.

“I love the hamburgers and my husband loves the ham sandwiches,” Redmond says. “I don’t know what it is that makes them so good.”

A cook who doesn’t mean to eavesdrop says in passing, “It’s the love we put in them.”

The cook is Deenora Payton of Moss Point. After 19 years at Burnham, she’s a supervisor and she knows most everyone she serves. As if on cue, she exclaims, “Hi Bridgette!” to a woman who just entered the store.

“I automatically know what they want,” Payton says, smiling. Just like she always knew that Wendy McKinney would want an unsweet tea with “pink sugar” (Sweet ’n Low) and lemons and sometimes a BLT.

McKinney, who had owned Burnham Drugs with her husband, John, for the past 25 years, died in May, just five weeks after being diagnosed with an aggressive form of lung cancer. In her honor, her husband established the Wendy McKinney Pharmacy Scholarship Endowment with a $100,000 personal gift to the University of Mississippi along with memorials contributed by many of their friends. The McKinney Scholarship will be available to eligible full-time pharmacy students with first preference given to Mississippi residents.

“She would be humbled by this gift and she would like the fact that it’s going to help students in need,” said John McKinney, a 1986 School of Pharmacy graduate. “But she would want it to be in someone else’s name because Wendy loved helping people anonymously; she did not want to be put in the limelight. She would help others without expecting anything in return.

“At a meeting at Ole Miss one day, Dr. Marvin Wilson (professor emeritus of pharmacology) was talking about a student who had to drop out of school because she was struggling financially. Wendy wrote a check on the spot to cover that student’s finances and her only criteria was that he couldn’t tell her where it came from. Wendy just loved to do things for other people. She was a very caring, giving person.”

Established in 1902, Burnham Drugs is an institution in Moss Point. The entrance of the red-canopied store-front introduces visitors to shelves brimming with pottery, picture frames, throw pillows, perfumes, decorative plates, candles, jewelry, holiday décor and other accessories for the home. Though Wendy McKinney was first a pharmacist, having graduated from the UM School of Pharmacy in 1986, she knew love is often expressed through giving and had become passionate about this gift shop area of the store.

“She had great taste, so if you needed a gift and you didn’t know what to get somebody, you could come in and talk to Wendy,” said Stacey White of Moss Point, a frequent Burnham customer. “She helped me pick out something for my daughter for Christmas one year. She took it to the side, wrapped it and had it all ready for me.

“I loved Wendy. Wendy was one-of-a-kind. She was funny and she loved Ole Miss; we have that in common because I love Ole Miss also. But yeah, she was just an all-around great person.”

Visitors who continue through the gift shop, along the aisles of over-the-counter medications, beyond the pharmacy and past the display of greeting cards will find the office of Sandy Lucas. The Pascagoula native has worked as office manager for the McKinneys for seven years and considers them close friends.

“She was the love of his life and you saw it every day. He would say, ‘I’m going to pick my bride up and we’re going to lunch.’ Everything was, ‘My bride’ or ‘My love’ and you didn’t see one without the other. They always went places and did things together,” Lucas said. “You know you have that ideal in your head where, when you’re married, you want to be treated like a queen and you want to treat him like a king … They had that relationship.

“I’m glad I got to see that side of him — to know how much he really did love her. She knew it too. There was never any doubt that it was a hundred percent genuine love,” Lucas said. “Everybody knew it.”

The couple renewed their wedding vows in 2008 at Dantzler Memorial Methodist Church, 25 years after eloping while they were students at Ole Miss.

Marie Harkey, the McKinneys’ accountant, attended the ceremony. She remembers, “John was looking up at her walking along the balcony and he was just grinning.”

“Wendy and I had a fairytale romance but it was real. We truly loved each other,” John McKinney said. “Not to say we didn’t have our moments but we truly adored each other.”

John McKinney is from Meridian, Mississippi; Wendy from Selmer, Tennessee. They met at Ole Miss. When she left a seat open next to her on the first day of their second semester of pharmacy school, he took advantage of it — “I sat down next to her and I never got up.”

From then on, the two were inseparable. They worked odd jobs together to pay their way through pharmacy school. After graduation, they moved to Meridian, where he worked as a pharmacist for Eckerd Drugs and she became director of the pharmacy at East Mississippi State Hospital.

“I thought it was quite an accomplishment for her to be able to do that in her 20s,” John McKinney said.

Five years later, they were presented an opportunity. At 28 years old, with $200 down, the couple borrowed more money than they ever imagined they would and bought Burnham Drugs.

“We thought we would just see how far in the financial process we could go before someone would tell us no. And no one ever told us no,” John McKinney recalls. “I remember the day we signed the contracts to buy the drugstore. We went by and looked at the rows of pain relievers and thought, ‘Man, we’ll have to sell a lot of Tylenol to make the loan payment.'”

Twenty-five years, three children (Alex, Chris and John, a current UM student who changed his major to pharmacy in honor of his mother) and four grandchildren later, the McKinneys own seven other pharmacies, a medical supply company, a funeral home and some industry-related companies in Virginia and Florida.

John and Wendy McKinney built a life together. But Lucas vividly remembers the day the nucleus of the love that fills the air—and the burgers—at Burnham Drugs took a fatal blow.

“It came out of left field and it’s just sad that they worked their entire life to get to the point where they could travel and do what they want. Now they can’t,” she said. “I think John’s angry, but there are so many people who have so many positive stories about her that it’s helping him heal.

“One of our customers showed John a picture of Wendy with a longtime customer who was autistic. Every time she came in to Burnham, she had to talk to Wendy,” Lucas said. “Wendy just brought that out of people. She made you comfortable. She made you feel good. She was just a happy person who was taken away way too soon.”

As a leader in her community, Wendy McKinney had active roles in the PTO, Moss Point Active Citizens, the American Heart Association and numerous other organizations. She was a member of UM’s Vaught Society, Rose Garden Society, the School of Pharmacy’s 1908 Society and the Ole Miss Alumni Association. In 2013, she was recognized by the Ole Miss School of Pharmacy as a distinguished alumna for outstanding service to her community after Hurricane Katrina.

In her free time, she loved mentoring young women, reading, watching Ole Miss sports, preparing for Christmas and doting on her children and grandchildren.

“She was such a sweet person with a really big heart,” Payton said.

Now at Ole Miss, Wendy McKinney’s spirit of giving will continue for generations in the form of a scholarship.

“What an outstanding way to remember such a giving person. A scholarship is, after all, a gift in its own right,” said Pharmacy Dean David D. Allen. “The McKinneys are special people and close, personal friends of mine whom I’ve known since I started at Ole Miss. Wendy’s passing was difficult for me, as it must have been for the many other lives she touched. She and John both have had a history of real compassion for others. I am extremely grateful to know them and am thankful for their generosity and service over the years.”

Individuals and organizations may make gifts to the Wendy McKinney Pharmacy Scholarship Endowment by mailing a check with the designation noted in the memo line to the University of Mississippi Foundation, 406 University Ave., Oxford, Miss. 38655; visiting www.umfoundation.com/makeagift or contacting Port Kaigler at 662-915-2712 or port@olemiss.edu.