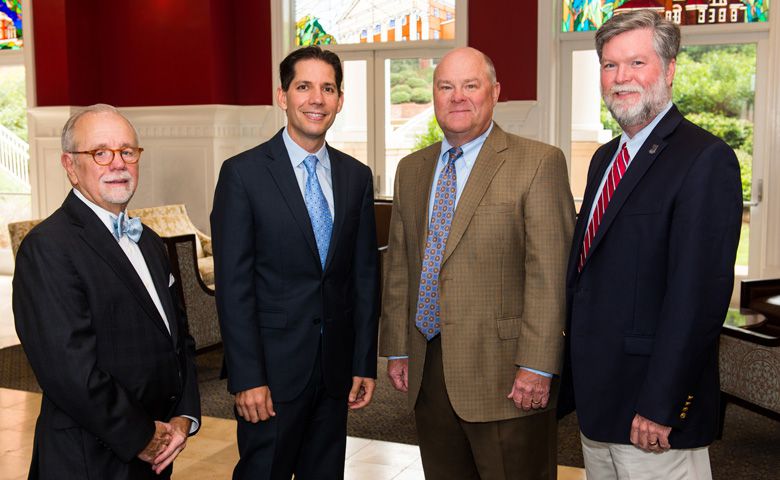 Van Hedges, third from left, has purchased a life insurance policy that will ultimately provide support for the UM School of Business Administration's insurance program and its faculty. With Hedges are, from left, Tom Quaka, senior vice president of FCCI Insurance Group in Jackson, Mississippi; Andre Liebenberg, the Gwenette and Jack W. Robertson Chair of Insurance and associate professor of finance; and Dean Ken Cyree.

Discovering that a friend has purchased an insurance policy on your life would, for many people, be unsettling.

“I am watching my back a little more carefully now,” said Andre Liebenberg, playing along with the suggestion that such a situation might cause him to shudder. “As a risk and insurance professor, I think about these things a lot — more than other people. So it didn’t really have that effect. It was a real honor, actually, that Van and Mary (Hedges) would think about doing something like this, something that would serve the program.”

Liebenberg is the Gwenette and Jack W. Robertson Chair of Insurance and associate professor of finance at the University of Mississippi (UM). He also happens to be named as the insured on a $250,000 life insurance policy endowed by his friend and fellow Insurance Advisory Board member Van Hedges of Nashville, Tennessee.

Hedges says the two have a history of good-natured ribbing and he means Liebenberg no ill will. In fact, the policy serves more as a tribute to someone who greatly influenced Hedges’ life.

“My wife, Mary, and I wanted to do something for Ole Miss and our insurance program and also to honor our friend and my mentor, Tom Quaka,” said Hedges, a 1975 graduate of the School of Business Administration and president of Southern Insurance Consulting. “I thought it would be fun and interesting to build in a key-man life component. No prudent, successful business, through their risk management program, would fail to have a key-man policy on someone as important to that business as Andre is to our program.”

The Thomas G. Quaka Faculty Support Endowment, which is named as beneficiary at the time of Liebenberg’s death, is designed to provide income for the recruitment and retention of faculty members in the School of Business Administration’s Risk Management and Insurance Program. Therefore, should Liebenberg — 43 years old and the picture of health — suffer an untimely death while serving as chair, some of the proceeds could be used by the board to find and incentivize a replacement.

Quaka said he is greatly honored by the tribute.

“Well, you can imagine, I’m overwhelmed,” he said. “We set up a very small endowment years ago and this will add considerable amounts to it for the future. But there really isn’t anything more important to us than the welfare of this chair and its long-term continuance.”

Quaka, senior vice president of FCCI Insurance Group in Jackson, Mississippi, and Hedges have been longtime friends within the insurance profession and have served together on the Insurance Advisory Board for many years.

“Tom has been the anchor to this board from day one and I think Andre would tell you that the board has been key to the success of the Risk Management and Insurance program, which is one of only 12 programs in the U.S., and 20 worldwide to be designated as Global Centers of Insurance Excellence,” Hedges said. “So we did this really to honor Tom’s service.”

Quaka, who frequently sees the end result of the Ole Miss insurance program, speaks highly of it.

“I employ the students who graduate from here and I’m happy to say we have 12 of them in our organization,” he said. “We have been exponentially successful because of the alumni we’ve been able to recruit from this program.”

School of Business Administration Dean Ken Cyree says Hedges and Quaka are among those who should be commended for their role in building the insurance program to its current level.

“I hope that I’m long gone by the time we cash in this policy and I’m sure Andre does too, but it’s a wonderful gesture, demonstrating the dedication of people like Tom and Van and others on this board. Without their support for the program, we simply could not do what we do,” Cyree said. “We would not have had the success we’ve had and also the success we’ll enjoy for generations to come because of their generosity, dedication, time and truly the ambassadorship that they’ve both taken on in the program. Because of that, we’ve had significant buy-in from the board and that’s been the key component in making this a successful program.”

Individuals and organizations may make gifts to the Thomas G. Quaka Faculty Support Endowment by mailing a check with the designation noted in the memo line to the University of Mississippi Foundation, 406 University Ave., Oxford, Miss. 38655; visiting www.umfoundation.com/makeagift or contacting Tim Noss at 662-915-5932 or tlnoss@olemiss.edu.