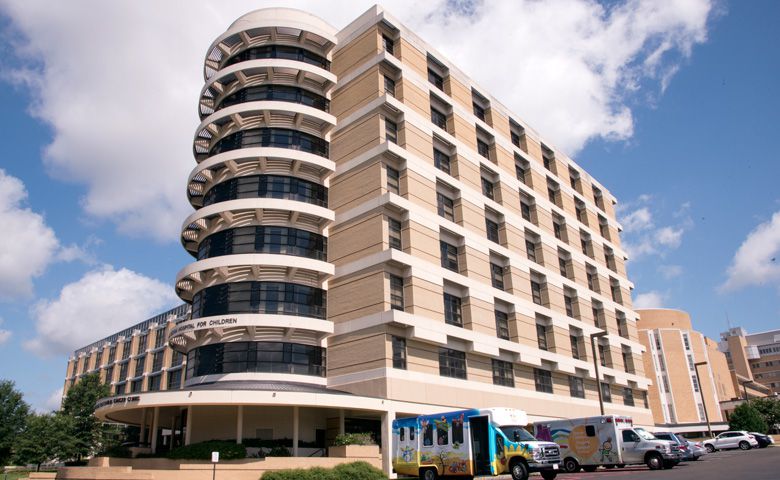 Batson Children's Hospital at the University of Mississippi Medical Center

Honoring the past while looking to the future, Batson Children's Hospital is marking its 20th anniversary this week while planning for future construction.

The state's only children's hospital opened its doors 20 years ago with a dedication ceremony May 16, 1997, and has provided care to thousands of ill and injured children since. Building on its history, Children's of Mississippi has construction plans that will ensure that the state's children have access to state-of-the-art care far into the future.

“Children's of Mississippi includes the only pediatric hospital in Mississippi, and it serves as a lifeline for so many families,” said Dr. LouAnn Woodward, vice chancellor for health affairs and dean of the University of Mississippi School of Medicine. “For the sake of these children, we have to continue the momentum established through our first two decades.”

At the urging of the Medical Center's first chair of pediatrics, Dr. Blair E. Batson, UMMC's first children's hospital opened in 1968. The 100-bed round structure, at the time, was considered to be state of the art. The rooms were small, though, and not designed for parents to stay with their children.

Over the decades, dramatic advances were made in pediatric care, and hospitals became more family-centered. Children who might once have been sent out of Mississippi for treatment, or worse, might have had no hope of a cure, were being treated in a hospital with a growing need for more space.

It was a need Dr. Owen B. “Bev” Evans, who followed Batson as pediatrics chair, wanted to address. “Dr. Batson gave me the OK to build if we could raise the money, and within that year, consultants in for strategic planning said that the number one thing UMMC needed to do was to replace its children's hospital.”

That funding got an unexpected boost a few months later, Evans remembered. “The grateful grandmother of a patient came over and said she wanted to leave us a little something. That 'little something' was 20,000 shares of Anheuser-Busch stock. At about $27 a share, that was $540,000, which we used to beef up the foundation and the lobby. That gave us the footprint to build on.”

The Children's Cancer Center, with construction funded with $2 million from the Junior League of Jackson, was finished in 1992, and since the new hospital was planned to be built around it, construction of the first five floors started in 1994. The sixth and seventh floors, for pediatric surgery, were added in 2004. By 2011, a pediatric emergency department was added.

The Puckett family of Pearl knows how important having care ready at Batson Children's Hospital. Daughter Caroline and son Luke visit Children's of Mississippi doctors, but for different reasons.

Caroline, 8, was born with a severe congenital heart defect that required three open heart surgeries between birth and age 3. At that time, Batson did not have the pediatric heart team that they have now, and the family had to travel to Philadelphia, Pennsylvania, for care.

Luke, 4, was born with spina bifida, a condition where the spinal column does not close completely. Luke had surgery at Batson when he was a day old to close his spine and spent close to a month in the NICU before coming home and has returned to Batson several times for other procedures and countless appointments.

“Our specialists are like family,” Mom Katie Puckett said. “We draw encouragement and support from them. We can't thank them and Batson Children's Hospital enough for the care they have provided, not just for Caroline and Luke, but for our whole family.”

The Pucketts, and many families like them, are why Suzan Thames, along with Evans and others, helped found Friends of Children's Hospital in spring 1989 with the monumental task of raising funds to build Batson Children's Hospital. That fall, there was $3,025 in cash on hand, which was used to launch the nonprofit groups' first fundraising event, now known as BankPlus Presents Light-A-Light, a Christmas tree lighting.

“We could not have accomplished this without the generosity of the people of Mississippi,” said Thames, who was Friends of Children's Hospital's first board chair. “They opened their wallets and gave from their hearts because they care about children.”

Friends of Children's Hospital showed its commitment to growth at Batson by pledging $20 million to The Campaign for Children's of Mississippi. “We needed Batson Children's Hospital when it was opened,” Thames said, “and we need this addition. I have just as much enthusiasm for our future building plans as I did 20 years ago, when we were building Batson.”

The total for the Campaign for Children's of Mississippi, the fundraising effort to fund most of the construction, has passed the halfway point to its $100 million goal. So far, more than $53 million has been committed to the cause.

The University of Mississippi Chancellor Jeffrey S. Vitter sees Batson Children's Hospital as a key part of efforts to improve the health of Mississippians. “Helping create a better Mississippi is part of our mission,” he said, “and I cannot think of a more worthy cause than the health of our children.”