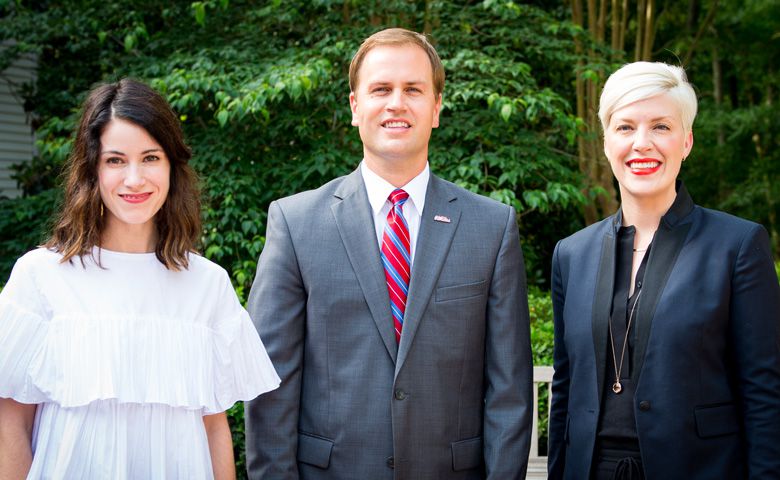 Nikki Neely Davis, from left, Denson Hollis and Lauren Beyers have been promoted to senior-level leadership positions in the University of Mississippi Office of Development, the unit charged with securing private gifts to support the academic community.

Three experienced fundraising and strategic planning professionals in the University of Mississippi Office of Development have been promoted to new leadership positions and charged with attracting private gifts to support academic excellence.

Denson Hollis and Nikki Neely Davis, who were previously senior development officers for the College of Liberal Arts, have been named development directors. Both will work closely with UM Chancellor Jeffrey Vitter and supervise development officers assigned to schools across campus and to the College of Liberal Arts. Lauren Beyers, prospect research manager, will now serve as philanthropy services director, overseeing several Office of Development units and support personnel.

“It is crucial that our flagship university be supported by a high-performing fundraising team with the talent to build enduring relationships with Ole Miss alumni and friends and to encourage investments in academics,” said UM Chancellor Jeffrey Vitter.

“Denson, Nikki and Lauren are steadfast in their efforts to attract major gifts at a time when UM must generate almost 90 percent of its operating revenue from sources other than state funding. They will help take our university to higher levels of excellence. We are grateful for these talented professionals as well as for our extremely generous and loyal donors.”

The Development Office is responsible for encouraging active participation by alumni, parents, friends, corporations and foundations and matching their interests and passions with university needs, including resources for scholarships, faculty, academic programs, research and libraries. Efforts from this department, combined with those of the UM Foundation, UM Medical Center Development and the Ole Miss Athletics Foundation resulted in $194.3 million in private gifts during fiscal year 2016, the fifth consecutive year private giving exceeded $100 million.

Just months after his tenure began, Chancellor Vitter charged Alice Clark, vice chancellor for University Relations, and Robin Buchannon, associate vice chancellor, with a review of the Development Office’s structure. That work began in March 2016 and has culminated with these promotions, as well as a national search for the first-ever vice chancellor for Development — a search that is ongoing, with Clark leading the search committee chair.

“Our oversight of Development included evaluating organizational structures of peer institutions, working with an independent consultant and reviewing previous recommendations for our Development Office offered by a consultant that studied our capital campaign readiness,” said Buchannon. “We feel we have implemented a structure that will better support our successful fundraising team and allow for future growth opportunities.

“From the outset, Denson, Nikki and Lauren were recognized as strong directors who consistently developed new strategies and built both internal and external relationships to propel the university forward.”

Hollis joined the Development Office eight years ago and has since received promotions that reflect his proven success in securing major gifts and building enduring relationships with UM alumni and friends. He holds a bachelor’s degree in political science from Ole Miss and a master’s degree in sports management from Georgia Southern University.

Davis joined the Development Office five years ago and, likewise, has earned promotions based on her performance with and vision for fundraising. She was previously with Emory University as associate director of foundation and corporate relations. She holds a bachelor’s degree in art and a master’s degree in journalism, both from Ole Miss.

As philanthropy services director, Beyers is part of the senior leadership team that will establish and implement the vision, mission and goals of development and philanthropy services. She will direct and manage the priorities of staff members within the areas of prospect research, annual giving, communications, Ole Miss First, Ole Miss Women’s Council, and operations and fiscal functions.

An 11-year employee, Beyers has served as the director of prospect management and research since 2008 and was a prospect research analyst for the previous two years. She is responsible for innovative approaches to implementing analytical solutions; creating systems, reports and performance metrics; building an employee training program; and establishing policy for major gifts and annual giving. Her work with prospect management and research includes integrating analytics and tools to improve decision-making and work-flow efficiencies, delivering greater insights with data and supporting strategic thinking across the Development team.

In 2000, Beyers earned an undergraduate degree in managerial finance from the UM School of Business Administration. She then developed expertise as an analyst in the energy sector of Houston, Texas, prior to her UM employment in 2006.