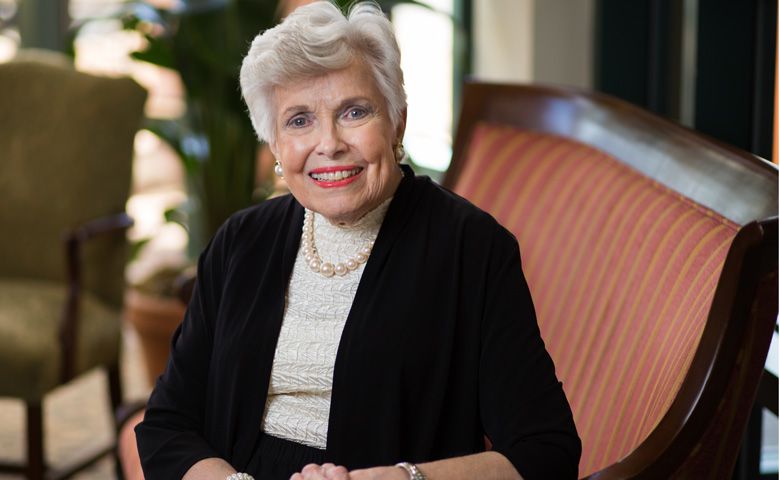 Philanthropist Robbie Hughes has strengthened her support of UMMC with a significant contribution to The Campaign for Children's of Mississippi.

Robbie Hughes recently made a generous gift to the University of Mississippi Medical Center, specifically to the Children's of Mississippi $100 million capital campaign.

In early 2015, Hughes and her late husband Dudley made a gift of $2 million to endow the faculty chair for the Memory Impairment and Neurodegenerative Dementia (MIND) Center, a cause near to their hearts since Dudley suffered from dementia. Hughes has requested the amount of the gift to The Campaign for Children's of Mississippi be kept confidential.

During their first involvement with UMMC and the MIND Center, Hughes met Dr. James Keeton, former vice chancellor of UMMC and dean of the school of medicine. Hughes stayed in touch with Keeton and others at UMMC, and eventually took a tour of the hospital and then Children's of Mississippi.

“After I found out the mission of the hospital and became acquainted with the responsible people, I was so impressed with the excellent caliber of care here,” said Hughes. “Dr. Woodward, the vice chancellor, is wonderful; being around her, I can tell how much she cares. It's not just a job for her.

“And Dr. Keeton, well, I'm impressed by not only what he has done for the hospital but also his outlook on life. He's interested in what he's doing and the success of the hospital. It makes me want to support UMMC because I learned the money is carefully allocated and put to good use,” said Hughes.

The tour of Batson Children's Hospital made an even deeper impact on Hughes.

“To know there were cardiac surgeons operating on teeny, tiny babies blew me away. I was impressed with the degree of caring they showed, and I wanted to be a part of it,” she said.

Keeton has become good friends with Hughes over the past few years, and the two share a mutual admiration for each other. “Her quest for knowledge is amazing. She wants to know everything,” said Keeton, adding, “After multiple visits, she told me she was going to do something (for the Children's campaign), and I had no doubt in my mind that she would and she would do it in her time.”

As a part of her tour and subsequent meetings, Hughes learned about the plans for the new addition to Children's of Mississippi, which was further affirmation that her gift would be put to good use. “I was really bothered that the children had to be moved to the main hospital for imaging, and I'm thrilled to know about the imaging and surgery units planned for the new hospital. I also know that the present neonatal unit is overcrowded, and that new part will be just fabulous.”

“We are very lucky to have a person like her who is committed to us and now also to the children of Mississippi,” said Keeton. “I haven't met many people in my life who care as much as she does.”

Hughes might argue that her husband Dudley, who died in 2015, cared as much as she does. “Dudley would be extremely pleased to know about this gift and that we were able to do this. He was always helping people, and his daddy was the same way,” said Hughes.