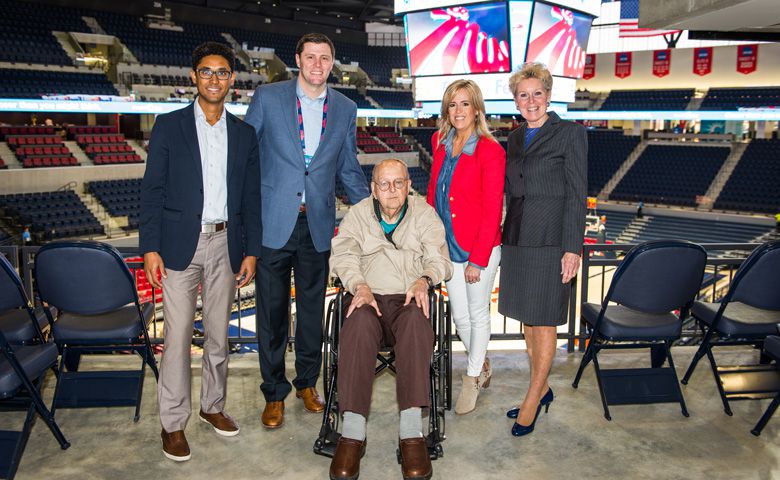 After years away from campus, University of Mississippi alumnus and sports fan Francis Cerniglia of Cordova, Tennessee, recently received a tour of The Pavilion at Ole Miss and a visit with Chancellor Jeff Vitter. He also got to root on the Rebels at a basketball game.

UM Development officers Barbara Daush and Raina McClure hosted Cerniglia as a token of appreciation for his history of financial contributions to the university. Cerniglia, who has supported the university through various gifts to different areas of need for more than three decades, made annual, major and planned gifts to benefit the School of Pharmacy and Ole Miss Athletics.

Cerniglia said he chose to support the two departments because, “the School of Pharmacy allowed me to have a successful life in my chosen field” and “since 1947, when Ole Miss won the SEC championship in John Vaught's first year as head football coach, I immediately became attached to Rebel sports and never looked back.”

The retired pharmacist said he found The Pavilion, home to Ole Miss basketball, and the campus in general “remarkable.”

“I have merely echoed what everybody has been saying about The Pavilion—a stupendous addition to the Ole Miss sports field!” he exclaimed. “My tour of the campus was most impressive to one who had not had the chance to view the campus in several years.”

Sandra Guest, vice president of the University of Mississippi Foundation, accompanied Cerniglia and others on his tour.

“The Ole Miss welcome Mr. Cerniglia received was something he will always remember, and the many kindnesses that were shown to him throughout the day made me proud to be a member of such a gracious and caring Ole Miss family,” she said, adding that Cerniglia’s planned and lifetime gifts leave a tremendous legacy for his family.

A Greenwood native, Cerniglia’s first experience in pharmacy was during a summer internship at Chaney’s Pharmacy in his hometown. Earnings were quite different back then – Cerniglia made $50 per week in his early days at the store and said he was very satisfied with it.

“That was new training for me as I hadn’t had much experience filling prescriptions yet,” he said. “I had to quickly apply what I learned in the classroom.”

After graduating from pharmacy school in 1959, Cerniglia went to work for Morgan’s Pharmacy in Yazoo City. It was an “old-timey” pharmacy where the “smell of medicine would knock you out,” he said.

Cerniglia later joined the staff at Walgreens in Vicksburg, Mississippi, where he worked for eight years before deciding to relocate.

“I could have gone to New Orleans,” he said. “Though I love it there, I decided to work in Memphis.”

Cerniglia worked for Walgreens in Memphis for 32 years before retiring in 1992.

David D. Allen, dean of pharmacy, is grateful for Cerniglia’s support. “When visiting with Mr. Cerniglia, you can see that he has a great love for all things Ole Miss – especially the School of Pharmacy,” Allen said. “I know I speak on behalf of everyone at the school when I say that we are extremely thankful and humbled by his support over the years.”

Keith Carter, senior associate athletics director for development and executive director of the Ole Miss Athletics Foundation, led Cerniglia’s tour of The Pavilion and echoed Allen’s sentiments: “It was a pleasure to get to know Mr. Cerniglia and, of course, as a former player, I’m always eager to talk about Rebel basketball with such a great fan of the sport. His gifts to our program will help keep us competitive for years to come, and we appreciate his ongoing generosity and support.”

Cerniglia’s planned gifts award him membership in the 1848 Society, named for the year the university welcomed its first students. The society recognizes generous donors who thoughtfully provide for the university through planned and deferred gifts.