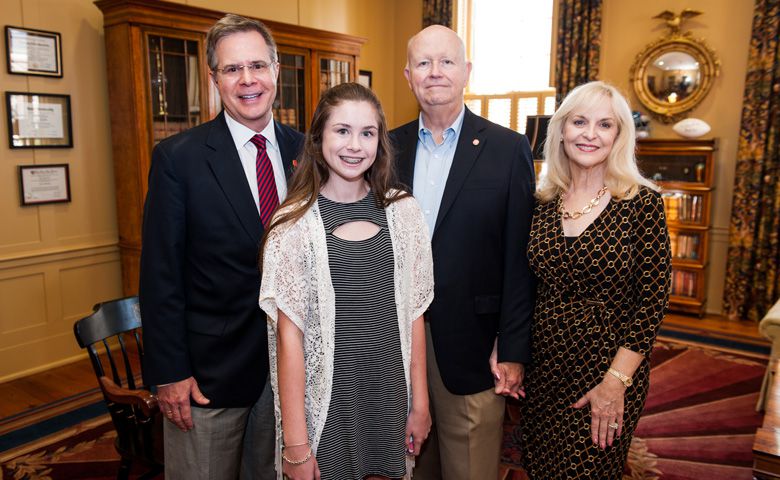 Achieving the Eagle Scout ranking — the highest accomplishment in scouting — reflects a level of leadership and commitment reached only by about five percent of Boy Scouts. Mitchell Crawford was one those proud Eagle Scouts.

Crawford, 34, died in 2011 after a five-year battle with lymphoma. Terry Crawford and his wife, Cindy, of Ocala, Florida, have committed $500,000 to create a scholarship endowment in the son’s name at the University of Mississippi School of Business Administration, with first preference going to Eagle Scouts. Both father and son graduated with business degrees from Ole Miss.

“After Cub Scouts, Mitchell attended a Boy Scout meeting at First Baptist Church in Ocala, which had a really strong program — one meeting and he was sold. He had a great Scouting experience and learned leadership skills and life lessons,” said Terry Crawford, the founder and president of Conimar Group. “I was a Scout leader and continue to help with fundraising, and Mitchell and I shared a wealth of outstanding experiences. It was a natural choice to direct the first preference for my son’s scholarship to Eagle Scouts.”

Mitchell Crawford was also a Vigil member of Order of the Arrow, and among his trips were those to the World Scout Jamboree in Korea, the U.S. National Jamboree and the Philmont Scout Ranch, where the father and son made a 65-mile trek, ate freeze-dried food and collected priceless memories.

“I think everyone starts out in Boy Scouting wanting to be an Eagle Scout — that’s the ultimate rank,” Terry Crawford said. “Becoming an Eagle Scout, however, requires hard work, dedication, persistence, focus and time. When young men are around 14 to 15 years old, there are a lot of other things competing for their time. Only those very dedicated to the goal reach it, and then those qualities they’ve developed benefit them the rest of their lives.”

The Mitchell Crawford Eagle Scout Scholarship Endowment also pays tribute to the lives of Mitchell’s mother, Connie Mitchell Crawford — a deeply dedicated elementary school teacher who lost her battle with ovarian cancer in 2001 — and to his great aunt, Mary Shashy Jones, for the roles they played in Mitchell’s life and the larger Crawford family, said Terry Crawford.

“I am inspired by the Crawfords’ story — what a remarkable way for a father to honor a son,” said UM Chancellor Jeffrey Vitter. “We are tremendously grateful to the Crawford family for their support of Ole Miss, our School of Business Administration, and Eagle Scouts. This significant commitment will certainly play an important role in attracting and supporting students of Mitchell’s caliber. I continue to be amazed by the service, energy and contributions by our alumni and friends — they are such a vital part of our university’s sustained growth and success.”

Mitchell Crawford’s legacy will be extended through this scholarship and by his only child, 13-year-old daughter Paige, an enthusiastic Ole Miss fan who has participated in summer dance camp and enjoys visiting the campus several times a year with her family. Her mom, Tara Knebel of Highland, Illinois, was a Rebelette, and Paige hopes to follow in her parents’ footsteps by making Ole Miss her college home.

“I think it’s incredible that this scholarship is named for my dad,” Paige Crawford said. “It’s good that it will help students who have worked really hard to reach their goals.”

Dean of Business Administration Ken Cyree expressed appreciation to the Crawford family for making such significant investments in students’ lives.

“Terry Crawford obviously put a great deal of thought into how he would create a permanent tribute to the life of his son. We are extremely grateful and humbled that he chose to provide student scholarships at Ole Miss. Mitchell’s legacy will be expanded as this endowment assists many students, who will then graduate and make contributions to the business world and to their respective communities. I have much admiration and respect for Eagle Scouts, and the values they hold dear translate well into successful business graduates. Terry devotes a great deal of his time to serve on our Business Advisory Council, which also directly impacts students’ experiences,” Cyree said.

"Mitchell and I connected quickly with each other during his time as one of my students in the MBA program at Ole Miss. Our similar backgrounds in Scouting made it easy for us to understand and respect each other right away.

“Mitchell's outstanding character reflected his father's exceptional strength of character and generous spirit. It is wonderful to see Mitchell remembered through this special gift to the university to help attract and retain more students who are cut from that same cloth — trustworthy, loyal, courteous, cheerful and reverent. I can't wait to meet the future recipients of this distinctive new scholarship. We are so blessed to have Terry Crawford in the Ole Miss family.”

Mitchell Crawford had a great zest for the outdoors and was a fisherman and duck hunter, leading to his love of Labrador retrievers. During his college years, he worked as a dog trainer for former University Police Chief Mike Stewart at Wildrose Kennels in Oxford, Mississippi, and was very involved with training Drake, the first Ducks Unlimited mascot. With his dog and best friend Tucker, Crawford enjoyed countless hours of training and hunting.

Stewart remembers the first time he met the younger Crawford, who was seeking help training Tucker at the then just-launched Wildrose Kennels, which is now nationally recognized. “I was a one-man operation then, and Mitchell took one of my classes. Then he started helping me with shows across the country and with the training of Drake for Ducks Unlimited. Mitchell figured out that Drake became easily bored and needed new things to capture his interest. Mitchell could read smart dogs better than anyone.

“Mitchell was this genuine, fun-loving, happy personality who was great to be around — always so positive,” said Stewart, who tried to recruit him to a permanent role at Wildrose after his graduation and remained close friends with him until the end. “Mitchell loved being part of Ole Miss; he was entrenched in all things connected with his university. This is a great tribute to someone who definitely had a heart for Ole Miss.”

Mitchell Crawford was actually headed for the University of Florida, when one of his friends was awarded a golf scholarship at Ole Miss. After a long weekend accompanying his friend to Oxford, he altered his plans, recalled Terry Crawford, whose family were early pioneers in north central Florida but also visited Ole Miss with a friend and decided to make Mississippi his adopted state.

“Dad, I’ve changed my mind. I want to go to Ole Miss because of the people,” Mitchell stated in a call home to Florida.

Following his graduation from Ole Miss, Crawford worked for Kraft Foods as a sales manager on the Wal-Mart sales team in Bentonville, Arkansas, where Wal-Mart founder Sam Walton was an Eagle Scout. At the time of his death, he had been with Kraft for 10 years, first serving as a regional sales representative in Wilmington, North Carolina.

He also was an avid sports fan who played on various intramural teams during his college years and then faithfully followed the Ole Miss and Kansas City football teams. During the last few years of his life, he participated in the annual Ole Miss fantasy football camp with his father. He also was active in First Baptist Church of Bentonville and was survived by his wife, Shanna Crawford, and many other family members and friends.

“Mitchell never stopped believing he would overcome the beast of cancer and was such an inspiration to his family, friends, doctors, nurses and all those he met on his journey,” said Terry Crawford. “I hope there are students who will be impacted by this scholarship and will benefit from their degree and chosen profession in business.”

The Mitchell Crawford Eagle Scout Scholarship Endowment is open to receive gifts from individuals and organizations. Checks to the University of Mississippi Foundation, with the name of the scholarship noted in the memo line, can be mailed to the foundation at 406 University Ave., Oxford, Mississippi 38655; or made online at www.umfoundation.com/makeagift.