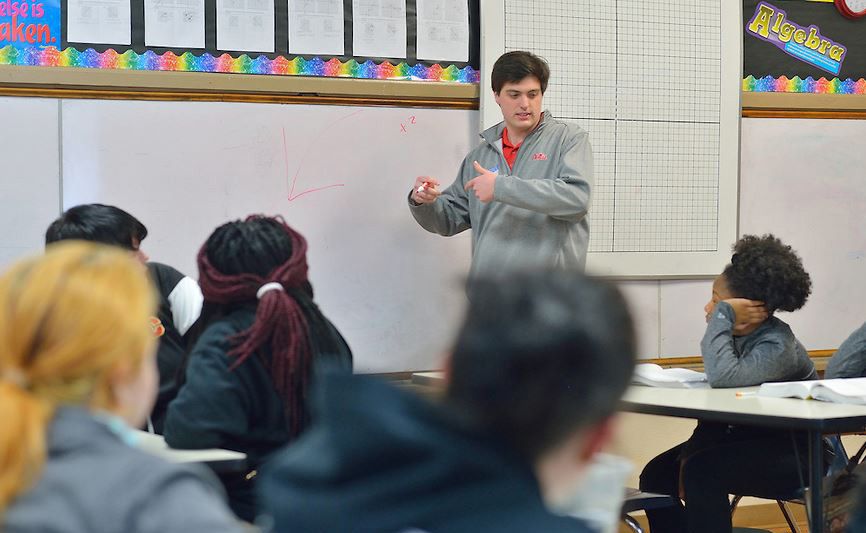 Graduating METP seniors, including Ben Logan of Sherman, have gained hands-on teaching experience since their freshman year as part of the program.

A new commitment of $28 million from the Robert M. Hearin Support Foundation marks a total investment of $42.1 million over 10 years into the Mississippi Excellence in Teaching Program, a collaborative teacher preparation program at the University of Mississippi and Mississippi State University that provides both scholarships and an honors college-type experience for top students.

The new funding, which the universities will split, will sustain the program until 2021 and comes as METP leaders prepare for the program’s fifth class of new freshmen.

Meanwhile, METP seniors at both UM and MSU, who were recruited into the program’s charter class in 2013, are planning to graduate in May and enter Mississippi’s teacher workforce for the first time.

“The Hearin Foundation’s goal is to improve the economic status of Mississippi,” said Laurie H. McRee, a trustee of the Jackson-based foundation. “(We) believe that if you can help raise the level of education, you can raise the economic level of state, as well.

“It’s incredible to see the caliber of (students) the program is attracting. The fact that the universities are working together is just icing on the cake.”

“We hope that this provides a template for our state institutions to continue to work together for education, particularly with respect for teacher education,” said Alan Perry, a trustee of the Hearin Foundation and a member of the Board of Trustees of State Institutions of Higher Learning. “We hope that their example is followed by other institutions across our state.”

Enrollment information compiled by the two universities shows a significant uptick in both the number and quality of new college students entering teacher education programs at UM and MSU since 2013, as a result of METP.

“The METP is the culmination of hard work that’s been done by the leadership of Mississippi’s two largest universities – normally very spirited rivals – to come together to address a very critical issue for this state, the future quality of K-12 teaching,” MSU President Mark E. Keenum said. “The continuation of this vital partnership shows the confidence that the Hearin Foundation has in our universities to substantially address this need in a transformative way.”

The program is designed to attract the best and brightest students from around the nation, and the average ACT score for incoming METP freshmen at both institutions is approximately 30. Today, 146 students from 16 states are members of METP at the two institutions. More than 60 percent of participants come from Mississippi.

“METP is truly a high-impact, high-value investment in the future of our state, and we are very grateful to the Robert M. Hearin Foundation for its continued support,” UM Chancellor Jeffrey Vitter said. “The METP scholars are exceptionally talented students who, as educators, will transform lives and communities throughout Mississippi.”

One of the nation’s most valuable scholarships, METP offers each recipient four years of tuition, housing expenses, living stipends, a study abroad experience, monies to attend conferences and more. The study abroad experience, valued at more than $6,000 per student, is a huge draw to potential recruits. Last summer, students from UM and MSU traveled together to British Columbia where the rising seniors spent time studying education systems in a different cultural context.

“This is one of the most significant private gifts to attract top students into the teaching profession,” said David Rock, dean of the UM School of Education. “This investment shows the value and importance of teaching. The economic impact of this program cannot be overstated.”

“The College of Education is excited about the Hearin Foundation’s continued support for the Mississippi Excellence in Teaching Program,” said Richard Blackbourn, dean of the MSU College of Education. “These additional funds will allow us to expand the program, thereby increasing the number of outstanding teachers placed in Mississippi classrooms.”

Admission into the program has become increasingly competitive since 2013. As a result, the overall caliber of freshmen education majors has increased at both universities, according to data provided by the institutions.

At Ole Miss, the School of Education has seen the number of freshman education majors with a 28 or higher on the ACT rise from five in 2012 to 42 in 2016 and is enjoying a 94 percent retention rate of its students.

“We are thankful to the Hearin Foundation for the opportunity to continue to improve a program that will have a positive impact on Mississippi,” said Ryan Niemeyer, director of METP at UM. “Their commitment to improving teacher preparation is bringing in students who would have otherwise never pursued living and working in our state.”

The program was created in 2013 with a startup donation from Hearin of $12.9 million.

This is the third time the foundation has made an investment into METP. In 2016, it granted additional funds that allowed both universities to increase the program’s incoming cohort size from 20 to 30 students each, allowing 60 new students into the program each year.

For admission into the program, applicants must possess top academic credentials – typically at least a 28 on the ACT or comparable score on the SAT – but they must also demonstrate a dedication and passion for the teaching profession as part of an interview with education faculty members.

Another aspect of the program is that students from both universities get chances to study alongside each other every year. Each spring, as part of regular cross-campus visits, the students come together for a weekend of seminars to discuss education issues. The location for the cross-campus visits rotates between Starkville and Oxford.

“I feel like I am prepared for teaching because we have been in classrooms since freshmen year,” said Brenna Ferrell, an Ocean Springs native who will graduate from UM with a degree in secondary English education in May.

“METP creates a sense of comradery and group. I have a family at the School of Education. We lean on each other. I am really thankful that I got to be part of the first class. I think everyone is going to do great things.”

In 2016, METP also expanded from exclusively training secondary education majors to include elementary and special education majors, as well. UM and MSU expect to admit a combined total of 60 new METP students in August 2017.

For information on providing a financial gift to the UM School of Education, contact Billy Crews, development officer, at 662-915-2836 or wlcrews@olemiss.edu.