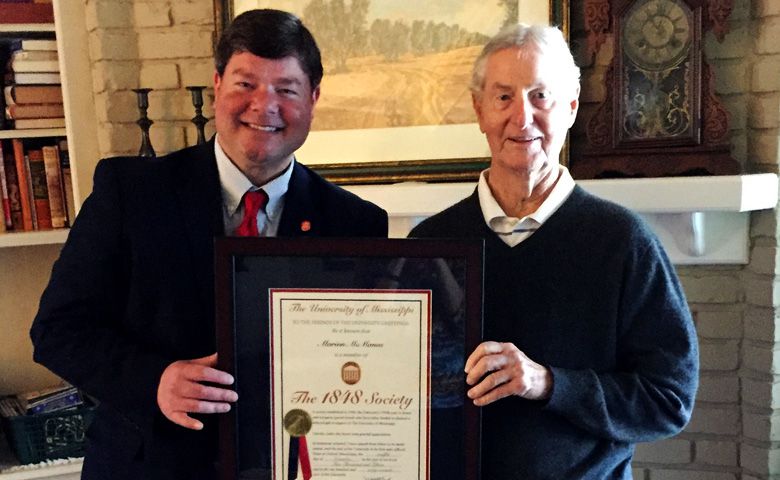 Tim Noss (left), development officer for the School of Business Administration, awards the late Marion McManus of Houston, Texas, a certificate acknowledging his gift to the university.

The late Marion McManus of Houston, Texas, grew up on a small farm, one of nine children. His parents' Meadville, Mississippi, home had no electricity or running water and every day he and his siblings were expected to pick cotton after school to help make ends meet.

“They lived a kind of pioneer lifestyle after the Depression and there wasn’t any money,” said Michael McManus, Marion’s son, also of Houston. “Growing up with that hardship gave him a lot of drive and ambition to make a better life for himself and he realized that having an education was an important part of that.”

Michael McManus says the business degree his father earned from the University of Mississippi in 1950 instilled the knowledge he needed to become successful. In appreciation, he wanted to support education by establishing the Marion McManus Scholarship Endowment with a $300,000 planned gift and the Marion McManus Excellence in Business Endowment with a $200,000 planned gift, both to the UM School of Business Administration.

“Mr. McManus’s story is a great example of the transformative power of higher education,” said Chancellor Jeffrey Vitter. “He used the education he received at the University of Mississippi to go from humble beginnings to a highly successful businessman. We are grateful for his gifts that honor the impact this university had on his life.”

The McManus Scholarship is available to incoming freshmen in the School of Business Administration who are Mississippi residents with a minimum ACT score of 27. Recipients may retain the scholarship for eight semesters provided they maintain a 3.0 grade point average. The McManus Excellence in Business Endowment provides support for the greatest needs of the Business School as determined by the dean.

“Mr. McManus’s generous gifts encompass the scope of work we do here by supporting the general expenses necessary to operate the school and its programs while also meeting the financial needs of students who want to pursue an education in business,” said Business Dean Ken Cyree. “We are very grateful for Mr. McManus’ thoughtfulness in including us in his will and for our many loyal donors like him who provide unrestricted support as well as scholarships.”

Tim Noss, a development officer for the School of Business Administration, had the privilege of visiting with McManus at his home shortly before his death.

“Mr. McManus enjoyed sharing stories with me about his college experiences and the friendships he made on the Oxford campus,” Noss said. “He had many wonderful memories of his classes and professors in the Business School as well as the many extracurricular activities with his fraternity, Delta Psi.”

Michael McManus said his father also made similar gifts to the University of St. Thomas in Houston (Michael’s alma mater) and to Louisiana State University, where Marion attended briefly before returning to Ole Miss. At LSU, Marion met the late Joan Carol Pender who would become his wife of 60 years and mother to his children, Michael, and Melissa McManus Chapman of Houston.

Prior to college, McManus served in the U.S. Navy during World War II. Upon returning, he was admitted to and planned to enroll at Ole Miss.

“There was a story he used to tell. He showed up at Ole Miss and they had thought, since his name was Marion, that he was a female, so they had assigned him to a female residence hall,” Michael said. “I think he basically got miffed and went off and enrolled at LSU. My uncle told me the government found out he wasn’t a resident of Louisiana and refused to pay for his school anymore under the GI Bill, so he transferred to Ole Miss to complete his education.”

After graduating, McManus was hired by Fuller-Austin Insulation Co. in Houston, eventually becoming part owner and president in 1967. The company was sold in 1974, but McManus continued to manage the company until 1981 when he started Tecon Services, which became a successful industrial insulation company. At the age 83, he officially retired and sold his interest in the business to his partners.

McManus’ planned gift awarded him membership in the 1848 Society, named for the year the university welcomed its first students. The society recognizes generous donors who thoughtfully provide for the university through planned and deferred gifts.

The McManus endowments are open to gifts from individuals and organizations.To contribute, send checks with the endowment name noted in the memo line to the University of Mississippi Foundation, 406 University Ave., University, Miss. 38655; visit www.umfoundation.com/makeagift or contact Tim Noss at 662-915-5932 or tlnoss@olemiss.edu.