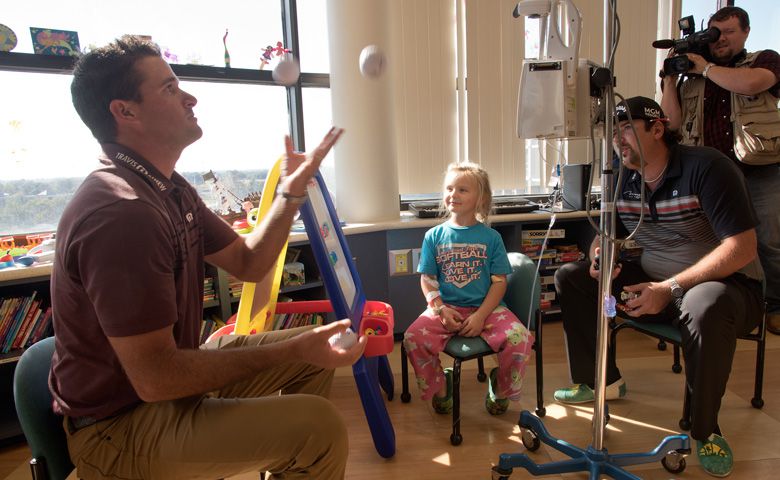 Jokes about Botox injections, spray tans and life as Mrs. George Stephanopoulos; FaceTiming with Abby Manning; a tour through the state’s only children’s hospital; and PGA golfers entertaining patients are all just part of Sanderson Farms Championship week.

The tournament’s first rounds began Thursday, Oct. 27, and play will continue through Sunday at the Country Club of Jackson.

On Tuesday, comedian, actress and author Ali Wentworth brought laughter and girl talk to the tournament site’s club house as part of the Women’s Day luncheon. Wentworth then went on a tour of Batson Children’s Hospital with Dr. Rick Barr, Suzan B. Thames Professor and chair of pediatrics at UMMC.

“I’ve always had a soft spot in my heart for children and helping and protecting them,” said Wentworth, who is the mother of two daughters, Elliott and Harper.

Wentworth serves on the board of the Good Plus Foundation, which works through a network of programs to break the cycle of family poverty through donations of goods and services, and founded BabyLove DC, which connects families throughout the nation’s capital, providing baby gear and supplies to those in need.

The Mannings are honorary chairs of the Children’s of Mississippi capital campaign, and Abby Manning was greeted by Kathy Sanderson, who is chairing the campaign along with husband Joe Sanderson, CEO and board chairman of tournament sponsor Sanderson Farms. The campaign seeks to raise $100 million to build a larger, state-of-the-art space for pediatric care at UMMC.

“I’m sorry I can’t be there in person,” Manning, a University of Mississippi alumna who is the mother of three daughters, said to the audience of about 380. “I am so impressed with Children’s of Mississippi and everything that goes on there.”

Said Kathy Sanderson in response to the Mannings’ service and their personal pledge of $1 million to the campaign: “You have stepped up to make a contribution to Children’s of Mississippi and the state, and we are grateful.”

Lewis, who was fourth runner-up to Miss America this year, is a frequent visitor to Batson Children’s Hospital and a vocal proponent.

“I’m so glad I’m in a room full of people who feel the same way about giving back to the hospital and organization that needs so much,” she said to the audience. “They’re doing such a fantastic job helping these kids, but they need so much more.”

Less than an hour after Wentworth finished her tour at Batson, Sanderson Farms Championship competitors Andres Gonzales and Sam Saunders were visiting with patients. Saunders, grandson of golf great Arnold Palmer, was juggling soft toy golf balls to the delight of patient Kimber Norris of Moselle.

“Both Sam and I have kids,” said Gonzales, “and we are very lucky to do what we do in the PGA and have the opportunity to spend time with kids here.”

The PGA helps raise funds for worthy causes “not just this week for this (Sanderson Farms Championship) tournament, but every week,” Saunders said. “What the PGA does is so unique in professional sports.”

Tickets to the tournament and a schedule of events are available at SandersonFarmsChampionship.com.