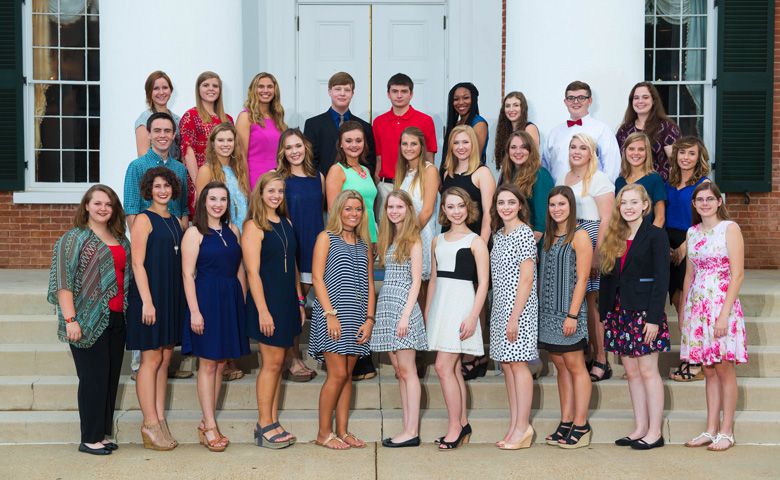 The 30 outstanding freshmen who comprise the fourth class of the Mississippi Excellence in Teaching Program at the University of Mississippi posted an average ACT score of 29.7, making it largest and most academically accomplished incoming cohort yet.

Originally designed for secondary education majors, the METP scholarship program has expanded to accept students majoring in elementary education and special education. It also increased its maximum cohort size from 20 to 30 students, thanks to $600,000 in new funding from the Robert M. Hearin Support Foundation in Jackson.

The freshmen, who come to Ole Miss from nine states, met with faculty and administrators recently during the program’s orientation at the Lyceum. This new cohort brings the number of METP scholarship recipients at UM to 75, and the first class of the program will graduate this May.

“I’m here to welcome you and to thank you for your commitment to go out and change the world,” Provost Morris Stocks told the group at the orientation.

“I am committed to our university and its efforts to transform lives. People who come to us as students go on to change the lives of others, so I am thankful that you care so much about education.”

Established in 2012 with nearly $13 million from the Hearin Foundation, the METP scholarship covers up to four years of tuition, housing, living expenses, study abroad and more.

“There is no other program like this in the nation,” UM education Dean David Rock told the students. “You are going to be challenged and start gaining experience in the classroom from freshman year.

“You will travel outside Mississippi and beyond the borders of our nation to learn how education is different across the world. We do all of this because we believe you can choose no greater profession than teaching.”

The program previously focused on recruiting top-performing students into teaching at the secondary level. The recent investment in METP will allow a broader mix of top-performing education students to enter the program.

“Our program that has grown rapidly in just a few years,” said Ryan Niemeyer, METP director. “Each year, the admissions process becomes more competitive and we’re seeing applications from as far away as California now.

“These are high-performing students who want to move across the nation, come to Ole Miss and stay in our state as a teacher. We’re very proud of this.”

METP held its first study abroad experience for seniors last June when it took UM students to different places in British Columbia and Alberta, Canada. During the trip, METP students and faculty had chances to meet with educators in multiple Canadian schools and at the University of British Columbia.

For the past two years, the program has also taken its rising juniors on a trip to Washington, D.C., to study American education from a policy perspective, as well.

“I was most attracted to METP because of the opportunities it provides,” said Alexander, an English education major. “I never thought I’d be able to find a program that would send me on a study abroad trip, pay for my education and help provide a fulfilling job once I graduate.”

All graduates of the program make a five-year commitment to teach in a Mississippi public school following graduation. However, this service commitment may be deferred for three years if a graduate wants to pursue graduate studies before teaching.

“I was blessed to have multiple teachers in high school who went above and beyond for me,” said Glaze, who is majoring in secondary mathematics education. “I believe that teachers are some of the most influential people in people’s lives and I hope to be able to change students’ lives one day.”

For more information on programs in the UM School of Education, go to http://education.olemiss.edu/.