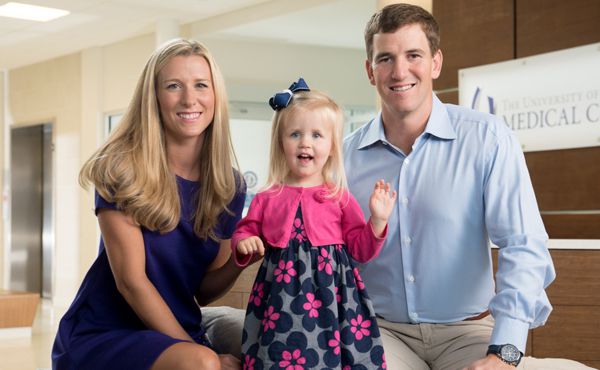 A winning play for the health of Mississippi's children was announced today as Eli and Abby Manning made a personal pledge of $1 million to the Children's of Mississippi $100 million capital campaign.

The couple, who will be lending their names and faces to publicity for the campaign, are honorary chairs and will be serving on the campaign fundraising committee.

“Abby and I are the parents of three precious daughters,” Eli said, “so we know that the health of your children means everything. We want every family to have the best quality care for their children close to home. That's why we opened the Eli Manning Children's Clinics at Batson Children's Hospital, and that's why we made this commitment to the future of pediatric care at UMMC.”

“Every mother wants her children to have what they need, and when they need medical care, they want that care to be compassionate and to be available nearby,” said Abby, who graduated from Ole Miss with a degree in family and consumer sciences. “This is why Children's of Mississippi means so much to our family.”

Eli was named one of the “Top 20 Philanthropists under 40” by The New York Observer and was a finalist for this year's Walter Payton NFL Man of the Year award. His devotion to Batson Children's Hospital and philanthropic efforts can also be seen in the article he wrote for The Players' Tribune, titled “The Autograph,” which tells of his visit with a young man fighting cancer at Batson Children's Hospital.

Joe Sanderson, the CEO and board chairman of Sanderson Farms who, with wife Kathy, serves as chair of the capital campaign, welcomes the Mannings to the campaign.

“It is a thrill for Kathy and me to work with Eli and Abby Manning on this effort,” Sanderson said, “and we know that, with their energy and passion for making Mississippi a better place, we will make this project a reality.”

The Sandersons started off the capital campaign by making a personal gift of $10 million, announced in an April 25 news conference at Batson Children's Hospital.

With the theme of “Growing. So they can grow,” the campaign aims to fund an expansion and update of the neonatal intensive care unit, add more pediatric ICU rooms and surgical suites, create an imaging department just for children and expand the outpatient clinic so that care can be centralized and more convenient for families.

Dr. LouAnn Woodward, UMMC vice chancellor for health affairs and dean of the School of Medicine, said the time to update Batson Children's Hospital is now. “Our children's hospital, the only one in the state, has outgrown its current physical environment. We have outstanding medical professionals, but for our children to receive the best care possible, we must provide updated space and equipment. The need is great. The stakes are high. We all own the responsibility to develop world-class facilities for our children. We are thankful to Eli and Abby Manning for joining our team.”

Dr. Rick Barr, Suzan B. Thames Professor and chair of pediatrics, called the Mannings, Sandersons and Friends of Children's Hospital, a nonprofit fundraising group that in August pledged $20 million to the campaign, valued partners in health care. “We at UMMC have great allies in the effort to help children live healthy, happy lives.”

“We joined this team because we want the very best for the children in Mississippi. This campaign to build a world-class facility will help shape the future of our state. Supporting it means giving Mississippi's doctors the tools they need to fight the good fight. You'll be telling Mississippi's parents that their children matter. You'll be giving Mississippi's sickest children new hope. And take it from me, there's no better feeling than knowing you played a part in giving a child a chance to grow up,” said Eli.