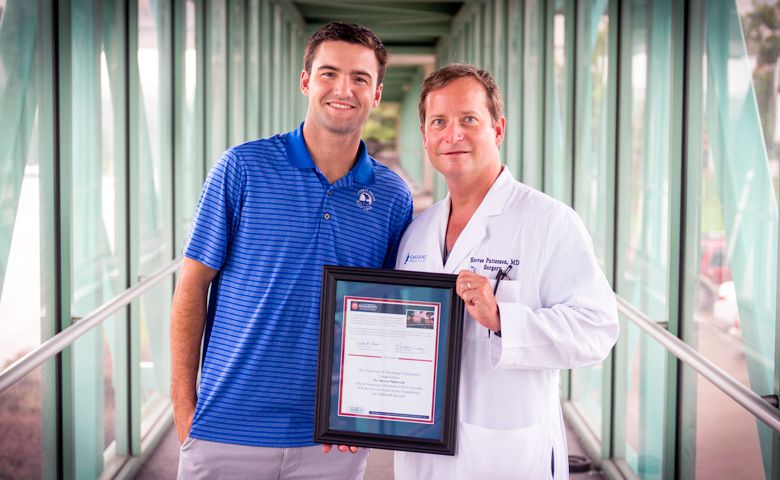 The University of Mississippi Foundation recently received its one millionth gift since it started counting 34 years ago.

The distinction goes to Dr. Steven Patterson, a Jackson, Mississippi, general surgeon and 1994 graduate of the UM School of Medicine, whose generous contribution to Ole Miss coincidentally earned him the Foundation’s millionth receipt.

“In 1982, we bought the framework software for our donor database and general ledger package, wrote the receipt and pledge programs, and started entering receipts into a database,” said Ron Guest, executive director of Foundation services, who led the design of the Foundation’s original system. “We were entering 5,000 gifts a year at that time; last year, we entered 55,000 gifts.”

While the number of generated receipts has increased exponentially, the number of staff members working with the system has not — a testament to the power of technology and more efficient procedures. Prior to the automation, receipts were typed, mailed to donors, recorded on an index card and then filed. Two staff members handled the process for more than a decade on the original system, entering gifts into computers that filled an entire room.

As the number of gifts increased, so did the need for a more robust, scalable program — one that could continually grow in database capacity.

Wendell Weakley, president and CEO of the UM Foundation, said the university appreciates each gift received: "We definitely want to express our sincere gratitude to all the generous donors who have helped build Ole Miss into the nationally recognized flagship university it is today."

Guest says the increased number of gifts to the university coincides with a larger population of graduates and more advanced development efforts.

“Also, Annual Fund programs got better. Athletic giving boomed and every chancellor since 1982 has recognized the importance of private support to our university and that has resulted in an increase in response from our alumni and friends,” Guest said.

In fact, universities in general began to place great importance on private giving in the early ’80s. University administrators realized that private support would enhance programs, support faculty salaries and provide students with scholarships through endowments.

Case in point: the Pattersons themselves were able to take advantage of a number of merit-based scholarships. Patterson’s daughter, Taylor, is a senior biology major in the Sally McDonnell Barksdale Honors College and son, Reid, is a junior accountancy major; both are taking core classes to prepare for medical school. Patterson and his wife, Cindy, a 1992 Ole Miss graduate with a degree in public administration, also have two younger children: Hunter, a rising high school senior who has already been admitted to Ole Miss, and Walker Jay, a 14-year-old Rebel fan.

“I feel my education and residency at the University of Mississippi Medical Center was a world-class education that prepared me to be able to practice medicine anywhere,” Steven Patterson said. “Likewise, the education my children are receiving at Ole Miss is excellent and I’ve been very pleased with their experience on the Oxford campus.”

For information on providing financial support to the University of Mississippi, visit www.umfoundation.com/makeagift.