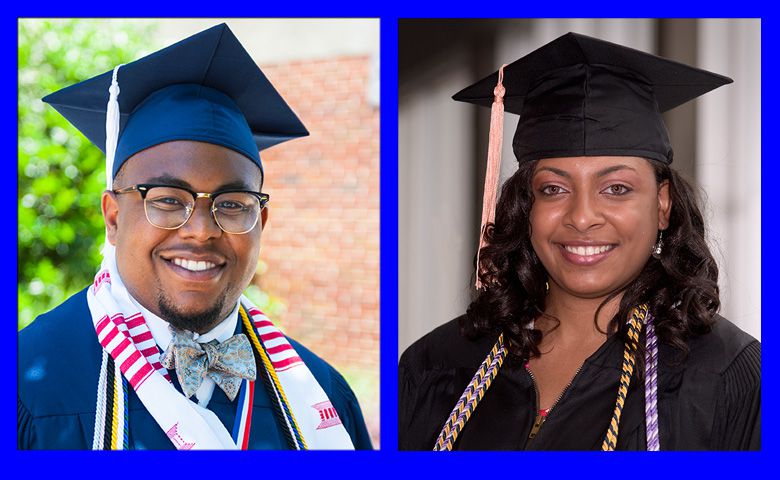 Logan Wilson and Davelin Woodard at their respective commencements.

The first-ever recipients of the four-year Everett-Williams Memorial Scholarship have graduated from the University of Mississippi and their futures are bright.

Logan Wilson of Hattiesburg, Mississippi, earned a bachelor’s degree in biochemistry from the university in May, and Davelin Woodard of Oxford, Mississippi, received a bachelor’s degree in nursing from the University of Mississippi Medical Center in Jackson. Wilson will begin medical school at UMMC this fall, while Woodard is a nurse in the surgical intensive care unit at UMMC. She cares for patients who are in critical condition before or after surgery as well as those who have been involved in life-threatening traumas.

“I am excited to have found a career that I love and that allows me to help people on a daily basis,” Woodard said.

Both Wilson and Woodard say that the Everett-Williams Scholarship gave them the financial freedom they needed to pursue their dreams at Ole Miss — a university they each grew to love.

“The Everett-Williams Scholarship presented me with opportunities that I never thought I'd have in college. It allowed me to focus solely on my academics rather than constantly worrying with how I was going to afford college,” Wilson said. “It also motivated me to be successful. Being one of the first two recipients, I wanted to set the standard high for future students that received this honor.”

Likewise, Woodard said the scholarship enabled her to attend the university by eliminating the financial burden of tuition.

“In addition, I had the privilege of meeting my donor, Mr. William McMullen, twice, and we also communicated via mail and email,” she said. “It was clear that he genuinely cared about my academic endeavors and my overall well-being. My family and I could never thank Mr. McMullen enough for the impact he had on my life and the part he played in my success.”

McMullen, a 1969 UM Law graduate from Charlotte, North Carolina, chairs the committee that selects scholarship recipients. His uncle, Thomas Marshall Everett of Meridian, Mississippi, seeded the fund with an initial gift of $90,000 and requested that the endowment include his wife's maiden name (Williams) to represent her side of the family. It was originally to be managed by the Southern Baptist Foundation of Tennessee. But in 2008, McMullen coordinated the transfer of the fund to the UM Foundation, creating two four-year scholarships that total $13,000 annually: one for the Sally McDonnell-Barksdale Honors College, the other for Ole Miss First, a program that rewards scholastic achievement and leadership.

“Philanthropists often say that they get out of the experience more than the recipients. For me, that is definitely true,” McMullen said. “It’s rewarding to know that we were able to help Davelin and Logan make it through school without a huge debt-load and I feel blessed and honored to be part of what they achieved.”

According to a Wall Street Journal report from May 2016, today’s college graduates are saddled with an average student loan debt of more than $37,000. Both Wilson and Woodard say they feel fortunate to have been selected for the scholarship.

“The University of Mississippi provided me with a top-notch education in biochemistry as well as allowed me to find my identity. It has opened my eyes to many of the controversies that exist in society today and also taught me how to handle them from an educated and respectful perspective,” Wilson said. “The University of Mississippi has overall shaped my education academically, socially and morally and for that I am grateful.”

Woodard agrees: “This scholarship was so much more than just a financial blessing,” she said, adding that she received the Everett-Williams Scholarship through Ole Miss First, which also provided mentorship, guidance and friendship throughout her time on the Oxford campus.

“I feel that my prerequisite courses at the Oxford campus adequately prepared me for the rigorous coursework of the nursing program at UMMC,” Woodard continued. “At UMMC, the classes provided me with theoretical knowledge, while simulation labs and clinical rotations provided me with hands-on experience. My education at Ole Miss and UMMC helped me feel prepared and confident to start my career as a registered nurse.”

Douglass Sullivan-González, dean of the Sally McDonnell Barksdale Honors College, said he is not surprised by Wilson and Woodard’s achievements.

“Davelin and Logan had such intense focus as students,” he said. “They each clearly had a very definite objective in mind and were committed to it. We wish them all the best in their continued education and professional careers.”

Rosie McDavid, director of the Ole Miss First scholarship program, mentored Woodard and knew her well: “Davelin is an exceptionally bright scholar who was so appreciative of her scholarship and because of it, she is going to go on and make a difference in this world in the field of nursing.”

“I also want to mention Bill McMullen,” she continued. “His concern and his commitment to these students mean so much. He’s got such a big heart and really cares about getting to know them. In fact, he will travel all the way from Charlotte to see his students.”

McMullen met both recipients on campus during their undergraduate days.

“I could tell right away that they were dedicated to completing what they set out to achieve,” he said. “I have indicated to each that if they have a need in the future, we are here. Our program doesn’t have to be for undergrads only. We are here to help if the need arises.”

The Everett-Williams Memorial Scholarship Fund is open to receive gifts from individuals and organizations by sending a check with the fund noted in the memo line to the University of Mississippi Foundation, 406 University Ave., Oxford, MS 38655; or by visiting http://www.umfoundation.com/makeagift. For more information, call Sandra Guest at (662) 915-5945 or e-mail sguest@olemiss.edu.