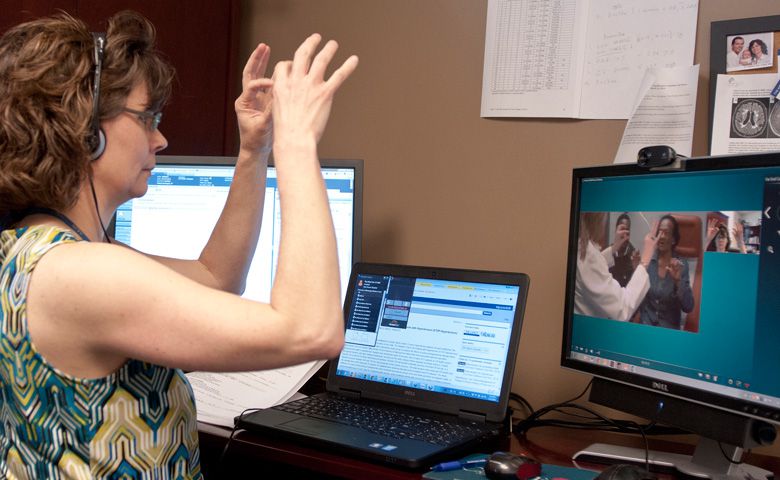 Dr. Gwen Windham, a provider at The MIND Center Clinic, demonstrates a basic movement from her desk in Jackson that she wants her patient, Ruby Patton, to mimic more than 130 miles away at the Taborian Urgent Care Center in Mound Bayou.

Ruby Patton, better known as Miss Ruby to everyone in her Mississippi Delta community, began showing the symptoms that often come with aging.

After a while, those moments of forgetfulness and confusion increased to a point that Miss Ruby's children started wondering if there was something else causing their mother to forget, for example, that she had started the washing machine — even when it was in mid-cycle.

Miss Ruby's daughter, Vivian Patton, wanted her mother to see a specialist about the potential of Alzheimer's disease or other forms of dementia. Yet the nearly three-hour drive to see a specialist at The Memory Impairment and Neurodegenerative Dementia (MIND) Center at the University of Mississippi Medical Center in Jackson from tiny Mound Bayou was a hindrance.

Just a few miles down the road from Patton's home, the Taborian Urgent Care Clinic offered a solution: TeleMIND — a service that allows patients like Miss Ruby to see a MIND Center specialist at UMMC's Jackson campus via live streaming video.

Funded by private donations and state appropriations, the TeleMIND program is built off the success of UMMC’s Center for Teleheath and operates very similarly by allowing patients to visit a clinic in their vicinity where they can be examined via live audio and video by a UMMC physician in Jackson. At the remote location, the patient is in an exam room with a nurse trained to help facilitate the virtual assessment.

For patients and caregivers like Miss Ruby and Vivian Patton, the ability to see a specialist in the familiar setting of their hometown is invaluable.

"It's a facility that (Miss Ruby) was familiar with. She's had children there. She knows those surroundings," Patton said. “This has been a great experience, and it's beneficial for the whole community."

Dr. Gwen Windham, a MIND Center Clinic provider, said doing everything possible to alleviate the burden of extensive travel on the patients, their families and caregivers is a significant convenience for TeleMIND patients. From her desk 130 miles away, Dr. Windham can observe the movement and speech of patients like Miss Ruby while conducting the same examination she gives patients in Jackson.

"It is a great feeling to be able to serve the residents of Mississippi using this technology," she said. "It's the next best thing to being with them in person."

The TeleMIND program is offered in the Mississippi Delta in Lexington, Grenada and Mound Bayou, with a fourth location opening soon in Greenwood. The MIND Center at UMMC is a national leader in Alzheimer’s research and clinical care.