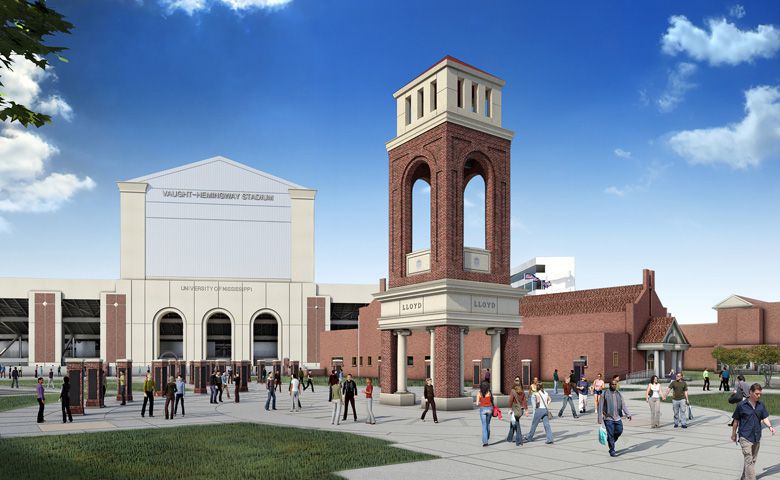 Ole Miss football fans are accustomed to the cacophony of sounds in the Grove on game day – the chatter of classmates reuniting, the laughter of children playing catch, the rousing horns and drums of the Pride of the South, the cheers as Rebels parade along the Walk of Champions – but in the 2017 season and beyond, one sound will be heard over all others: chimes.

“Our hope is that the bell tower can be seen and its chimes heard from one end of campus to the other,” said Bob Lloyd of Jackson, Mississippi. To support the construction of a stately new bell tower in the north end zone of Vaught-Hemingway Stadium, Lloyd, his brothers Ted and Ben, and their late father William B. “Cosmo” Lloyd have committed $1.3 million to the Forward Together campaign for Ole Miss Athletics.

The tower is expected to be finished by early spring and dedicated during the Rebels’ spring game weekend. At more than 60 feet tall, it will be the focal point when walking from the Grove to Vaught Hemingway’s North End Zone Plaza along the new Gertrude C. Ford Way. The game day Walk of Champions will culminate with players walking through the Lloyd Bell Tower.

“On game day, the special tone of the Rebel bell will signal game time — time to take that jovial Grove attitude and bring that energy to the Vaught with a swagger and confidence that says, ‘This is our day and our house!’” said Lloyd, a 1983 graduate of the University of Mississippi School of Business Administration.

Lloyd presented the bell tower idea to the university in 2010, having been aware of traditions surrounding similar structures at other schools. About a year later, he received a call from Matt Mossberg, a development officer for Ole Miss Athletics, saying the tower would be an outstanding addition to the Vaught’s north end zone expansion project.

“We really like this and are grateful to the Lloyds for helping to bring the idea to fruition,” said Mossberg, adding that the bell tower is scheduled to be completed in time for the 2017 spring game. “The Lloyds want to be part of the fabric of Ole Miss Athletics forever and we believe having this bell tower, which will bear their family name, is an impactful way to accomplish that. It will stand right in the middle of the pedestrian space of the Letter Winner’s Plaza, right in the foot print of the stadium. We can see fans rallying around the tower and hopefully starting a few new traditions in support of the Rebels.”

New traditions could include bathing the tower in red light and ringing the chimes every time the Rebels win a sporting event or having a Hotty Toddy celebrity ring the bell before asking fans the renowned game-launching question, “Are you ready?!”

“This is about creating an experience that gives recruits chill bumps when Ole Miss comes onto the field,” Lloyd said. “Ole Miss needs a variety of factors that give us a unique edge to recruit against other SEC schools.”

Additionally, the Lloyds hope the bell tower will serve as a representative of achievement university-wide.

“We would like the bell to ring loud and proud for each and everything positive Ole Miss, such as a new Rhodes Scholar, a women's volleyball victory, a professor being named best in the SEC, a new recruit commit, alumni being honored – any positive event that Ole Miss wants to celebrate,” said Ted Lloyd of Jackson, a 1976 graduate of the UM School of Business Administration.

“The utilization of the bell tower can be one of those advantages that ingrain Ole Miss into our future students and athletes. It’s intended to be a symbol to rally around — a new beginning that the entire Ole Miss family can love and embrace without regard to race, gender, age or social status,” Bob Lloyd said. “It’s to help facilitate the eternal love for Ole Miss that exists in almost every student who has ever stepped foot on campus.”

The Lloyds, who grew up playing catch in the Grove and still tailgate in the same spot each year, hope their gift to the Forward Together campaign will help Ole Miss Athletics continue to build a powerhouse program.

“We hope it will provide one small piece of the puzzle that helps Ole Miss become the Cinderella story of college football and win a national championship again,” Bob Lloyd said. “We believe if you don't dream and strive for what you really want, you will never achieve the goal.”

It’s what their father would have wanted.

“Bob, the driving force behind the bell tower project, suggested naming the Lloyd Family Bell Tower in honor of Cosmo, our dad, whose love, loyalty and dedication to Ole Miss was unmatched and never questioned,” Ted Lloyd said. “Dad always said, ‘If a recruit didn't feel the love for Ole Miss then best he or she go somewhere else; we want student-athletes who want to be here.’ Cosmo loved and supported the idea of a bell tower from the first mention of it and its purpose.”

A 1974 graduate of the UM School of Business, Ben Lloyd of Oxford, Mississippi, agrees with his brother: “Cos would be very happy and very proud with the bell tower because he loved Ole Miss so much. And he knew that he instilled his love and passion for his alma mater in his sons. He would be honored that his family could make such an important and permanent contribution to the campus.”

The bell tower will also be dedicated to the memory of Scott Keller Lloyd, Ted Lloyd’s son who was killed at age 16 in a 2008 automobile accident.

“There was no doubt, none, that he was a great Rebel fan and would have been a great Ole Miss student and loyal alumnus if not for one tragic mistake,” Ted Lloyd said.

The $150 million Forward Together campaign was launched in 2011 to strengthen Ole Miss Athletics in its continuous commitment to excellence. With the help of 3,425 donors, the ambitious campaign surpassed its original goal in November 2015, raising $155 million. Currently, Forward Together has surpassed $165 million on its way to a new goal of $200 million.

The campaign conceptualized 10 to 14 capital projects, including the gleaming Pavilion at Ole Miss – a $95 million arena that seats approximately 9,500 fans for basketball games, concerts and other events.

To learn more about the Forward Together campaign for Ole Miss Athletics, contact Keith Carter, senior associate athletics director for development and executive director of the Ole Miss Athletics Foundation, at jkcarter@olemiss.edu or call 662-915-7159.