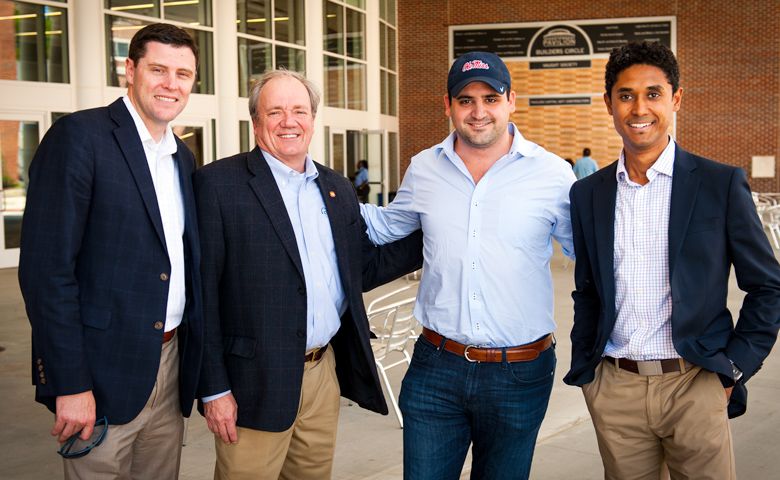 Will Stroud (in cap) is greeted at the Pavilion by, from left, Keith Carter, executive director of the Ole Miss Athletics Foundation, Wendell Weakley, president of the UM Foundation, and Matt Mossberg, associate athletics director for development and major gifts.

At only 29 years old, Will Stroud has done just that.

The University of Mississippi alumnus, a former restaurant owner and now CEO of a Dallas-based investment firm, is a self-made millionaire who recently contributed $125,000 to the Forward Together campaign for Ole Miss Athletics.

“I was bitten by the aviation bug very, very early. My grandfather was a major general in the Marine Corps, an aviator, and I got pretty used to being around airplanes and really fell in love with them,” said Stroud, who flies the plane to watch the Rebels, for business or to simply get out of the city for a weekend of hunting, camping, fishing and hiking with friends.

More importantly, though, he often uses the Cirrus to fly cancer patients across the country for specialized treatment or to transport others in need. For several years, he served on the board of Angel Flight, a non-profit organization that arranges air transportation for any legitimate, charitable, medically-related need.

That’s just the way he is. Friends and family say Stroud genuinely cares for people. With an easy smile, he’s instantly engaging, and they credit that quality for the financial success he realized at an age when other recent college graduates are still only a few rungs up the corporate ladder.

“Will can meet someone for the first time and make them feel like they’ve known each other for years,” said John Becknell of Metairie, Louisiana, who pledged Alpha Tau Omega with Stroud their freshman year at Ole Miss and roomed with him for two years. Stroud was best man in Becknell’s wedding last July. “Whether donating his time or money to a charity or simply helping out a friend, Will is by far the most generous person I know.”

“Will treats each person he meets with respect – no matter their age, economic or social status,” said Stroud’s father, Jim of Dallas. “There is something about that. He connects as easily with the sexton at our church as he does when conversing with someone famous.” On a recent return from Australia, for example, Stroud spent about three hours in deep conversation with his seat mate, a former Secretary of the Navy.

Stroud is a young man with mature priorities. While many other young adults enjoy loud music and late nights, Stroud prefers a quiet dinner and a glass of wine with his girlfriend. His desire to quickly establish himself may be the result of a lesson he learned too young: that life is fleeting. When he was 9, his 7-year-old sister, Jennifer, died of a rare form of leukemia; she was his only sibling.

“That is a make-you or break-you experience,” Jim Stroud said. “But Will is an over comer. He had some learning differences which made school difficult at times. Like with other kids with learning differences, those struggles bred perseverance and a lot of street smarts.”

Becknell credits Stroud’s success to the work ethic he learned from his parents: “Will comes from an amazing, caring family,” Becknell added. “His mother and father, Lynn and Jim Stroud, instilled a strong work ethic in Will and taught him the importance of giving back to others less fortunate than himself.”

Stroud says his father often told him there are no free lunches.

“You know, my dad is extremely, extremely bright and smart, but he started with zero. I mean, he always said if you wanted to find a silver spoon, you needed to go to another neighborhood,” Stroud recalled. “He was a latch-key kid in a military family with divorced parents. There was nothing there but hard work. That’s what it takes. It takes hard work and risk and the experience to measure three times, cut once. You’ve got to be very diligent.”

Stroud’s college roommate and fraternity brother Ricky Bryan of Houston, Texas, has seen this side of his friend many times.

“The thing that always baffled me about Will was how he viewed his future after college. He always had a very positive outlook. College was not the end but the beginning of the best years of his life,” Bryan said. “To this day, he is the same way. He sees himself constantly growing and moving up in the world and I think that attitude has served him well. He’s the kind of person who bounces back from failure stronger than he was prior. He’s resilient.”

In the unstable world of investments, resilience is critical.

“When I was younger, I had an investment account where I would ride the trends. I pretty consistently lost money because I foolishly thought, ‘This stock is up 20 percent on the year’ and I was not looking at the underlying value of the company. I was just saying, ‘You know, if this goes up 20 percent now, it will go up 40 percent in a year’ and I just couldn’t make it work,” Stroud said. “So I had to go back to square one and say, ‘This is where I think the value is; this is how much I need to make; this is the standard deviation of risk that I am willing to take and if it’s outside of that, then we can’t look at it.”

So, for Stroud at least, success before 30 comes from a little resilience mixed with hard work, a business degree, a personable spirit and a large dose of trial and error.

Keith Carter, senior associate athletics director for development and executive director of the Ole Miss Athletics Foundation, said Stroud’s gift will be used to improve facilities and programs for Rebel teams. “We’re building a program that must continually improve to be competitive and Will’s gift will help us continue on that path,” Carter said. “I am always impressed to see young alumni like Will who want to get involved in shaping the future of Ole Miss Athletics. Our student-athletes will receive the return on this particular investment. Will should feel very proud of that.”

For more information about the Forward Together campaign, contact Keith Carter at jkcarter@olemiss.edu, call 662-915-7159 or visit http://givetoathletics.com/forward-together/.