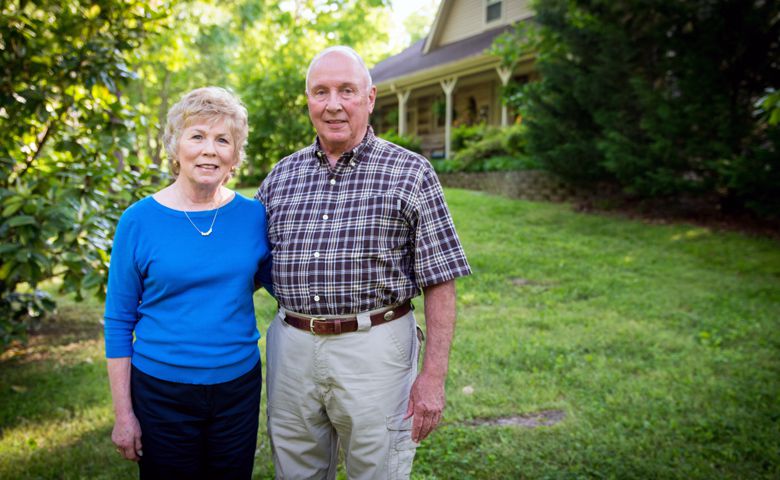 Linda and Chuck O'Bannon at home in Parsons, Tennessee.

On any given day, a visitor to Chuck O’Bannon’s home in Parsons, Tennessee, might find the retired pharmacist planting a garden, making preserves from blackberries and muscadines he grows or feeding the two canine “fur babies” who have adopted him and his wife, Linda.

You might just as easily find him painting and installing chair rails or hooking up his trailer to haul a load of walnut and cypress lumber while Linda can probably be found working in her herb garden or tending to the many flowers and plants in their yard. Much of this is part of ongoing renovations to the countryside home on 20-plus wooded acres that the O’Bannons have enjoyed together for 17 years.

“We are busier now than we were before we retired,” says Linda, who’s not even really retired; she still works as a pharmacy consultant for long-term care facilities close to their home. “Some days, Chuck will say, ‘What do you want to do today?’ and that’s just the most wonderful thing in the world to hear because that means we don’t have anything already planned.”

But those days are few and far between. The O’Bannons are accustomed to hard work; in fact, they thrive on it. They’ve done it all their lives: Chuck, as a delivery boy and occasional janitor for his father’s two Jackson, Tennessee, drug stores, and Linda as one of six children who were expected to earn their keep. Hard work, they say, grew the net worth that has allowed the couple to establish the Charles P. O’Bannon and Linda Rucker O’Bannon Scholarship Endowment in the University of Mississippi School of Pharmacy with a $700,000 planned gift.

“Many of our students deal with the same challenge Chuck and Linda O’Bannon faced on campus: the struggle to maintain their grades while also having to work their way through school. The O’Bannons’ generous gift will help alleviate some of that stress and we are extremely grateful for empathetic alumni like these who know the importance of private support,” said David D. Allen, dean of the School of Pharmacy.

The O’Bannons’ work ethic is exceptional. Linda, who was raised on meager means in Kilmichael, Mississippi, followed her older brother, Bill Rucker, to Ole Miss and paid her way through college working for Dr. Wade Waters, then chair of the pharmacology department and distributor of student loans. She ultimately earned her pharmacy degree in 1969 at a time when few women chose the rigorous program and even fewer made it a career.

Likewise, Chuck earned his pharmacy degree in 1969 using veteran assistance he received after serving in the military immediately after high school. At age 23, he entered college at the University of Tennessee at Martin (UTM), where he studied for three years prior to transferring to Ole Miss. There, he was assigned a lab partner named Linda.

“Money from my family was almost nonexistent but I received about $100 a month from a G.I. bill I had saved to use in college. I have always been so grateful for that assistance,” Chuck said. “I also worked in college to make a little extra money, but I can still tell you how many crackers you add to a pound of hamburger to make it go around.”

The O’Bannons hope their gift will help students avoid the financial pressure they experienced in college.

“If our gift can just give some encouragement to somebody who needs it, then it’s certainly worth it,” Linda said. “And we want what we’re giving to be ongoing support for generations of pharmacy students who may be challenged financially as we were. It’s our way of saying thank you for the opportunities our education at Ole Miss has given us.”

After college, Chuck and Linda started at what was then the bottom of the pharmacy profession’s food chain with an annual salary between $6,000 and $12,000. Over time, they worked their way up, moving from place to place to better their standing in the field. After six years working in retail pharmacy, Chuck accepted the position of director of pharmacy in a Kentucky hospital owned by Hospital Corporation of America (HCA). He practiced there for 11 years before being transferred to a North Carolina HCA hospital. Following a corporate buyout, Chuck was transferred to a larger hospital in Nashville, where he served as director of several departments, including pharmacy.

“After a second buy-out that significantly changed patient care perspectives, I decided after 23 years as director of pharmacy to once again look at other areas of pharmacy practice, so I returned to retail,” Chuck said. “Five years later, I accepted an offer to enter long-term care pharmacy and remained there until I retired.”

Linda briefly worked as a retail pharmacist before becoming a hospital pharmacist for 13 years. In North Carolina, she became the pharmacy director at a long-term care facility and has continued to work in a consulting capacity, helping long-term care facilities comply with government guidelines. Additionally, for many years, she was active in the American Society of Consultant Pharmacists, having served on the Board of Directors and as vice president of that organization, lobbying Washington on behalf of the profession.

Now, the O’Bannons enjoy their life in the country, entertaining friends in a breezy, shaded outdoor space that Linda decorated with easy chairs and slowly revolving ceiling fans. An industrial-size grill stands nearby on which they often barbecue chicken wings, chicken halves, turkey breasts and thighs, racks of ribs, beef brisket or wild game. Word has spread that Chuck has a knack for cooking meat to succulent perfection, using a method and special sauce he learned as a boy from sharecroppers on his grandfather’s farm.

Just four miles from the Tennessee River, Chuck fishes and hunts white-tail deer. The O’Bannons also enjoy traveling: to Oxford, a central meeting spot for Linda’s scattered siblings, and to Canada and Alaska, where Chuck hunted big-horn sheep. In the off-season, Chuck, a state champion marksman who was a member of the Air Force big bore rifle team and lettered in intercollegiate small bore at UTM, indulges his love of hunting by teaching others how to shoot. Among his many students was a brother-in-law of country music legend Hank Williams Jr.

Equally philanthropic, Linda volunteers to serve food to participants in the World’s Largest Coon Hunt, a wildly popular annual fundraiser for St. Jude Children’s Research Hospital that draws hundreds of hunters to the community from across the country.

The O’Bannons’ planned gift gives them membership in the 1848 Society, named for the year the university welcomed its first students. The society recognizes generous donors who thoughtfully provide for the university through planned and deferred gifts.

Linda said those who inspired their career choice and ultimate gift to the university include her parents who encouraged her to pursue a degree; her brother, Bill, also a successful pharmacist who encouraged her through college; Dr. Waters, who gave her a job in college; pharmacy alumnus Sonny Potts who was a special family friend and acted as her preceptor; Joe B. McCaskill; the late Kerby Ladner, director of the UM Bureau of Pharmaceutical Services; the late Dean Charles W. Hartman; former pharmacy professor Mickey Smith; and former development officer Sarah Hollis, who first introduced the O’Bannons to the planned giving option.

“Linda and Chuck are the epitome of the Ole Miss family. They are loyal alumni who value their education and the experience they received at Ole Miss. I thoroughly enjoyed getting to know them,” Hollis said. “They have a genuine heart for their profession and believe in the strides that our School of Pharmacy is making in pharmacy education, clinical practice and ground-breaking research. Their legacy will be realized in the impact this gift makes on individual students and on the lives of patients when those students become capable practitioners as the O’Bannons have been throughout their careers.”

For more information about including the university in a will or other estate plans, contact Sandra Guest, vice president of the UM Foundation, at 800-340-9542 or 662-915-5944, or visit www.umfoundation.com/planning.