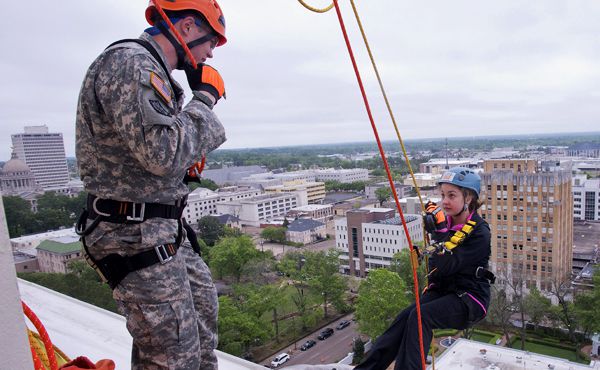 Mississippi National Guard Sgt. Matt Hughes instructs former Batson Children's Hospital patient Mary Ellis Cravey on how to rappel off the 14-story Trustmark building during the Over The Edge with Friends fundraiser Saturday. Cravey, of Madison, has been cancer-free for about two years. Below, Friends of Children's Hospital board president Sara Ray gives a thumbs up to rappelling after her descent.

Staring down a descent of 14 stories is the stuff of nightmares for most, but for the more than 90 volunteers who raised funds, buckled up and rappelled down the Trustmark corporate headquarters in downtown Jackson, it was a day of dreams.

Part of Over The Edge with Friends, a fundraiser for Friends of Children's Hospital held Friday and Saturday, the group raised more than $173,000, stories higher than the original goal of $100,000.

“We set a goal of $100,000, and at the time, I thought that was reaching high,” said Tena McKenzie, executive director of Friends of Children's Hospital, an organization that raises funds for Batson Children's Hospital. “Knowing we reached this, I am stunned.”

Leading the way was Sara Ray, board president of the group, who made her way down with Gov. Phil Bryant and other VIPs including college mascots Rebel, Bully and Seymour Friday evening.

“It was fun!” she said not long after reaching terra firma. “I wasn't scared at all. I'd do this again!”

Those were the sentiments of many of the volunteers, who loved rappelling once they took that first step off the Trustmark building. Some overcame bouts of fear by going down the building together.

Mary Ellis Cravey, a Madison eighth-grader who signed up to descend the day before, headed down with Tiffany Key, her Child Life specialist at Batson Children's Hospital. Cravey, a leukemia survivor, took that scary first step, but anyone who can beat cancer can't let something like the law of gravity limit them.

Before long, she was a pro.

Key's safety gear had locked up, slowing her down.

They were both ready to go back up to head down again if the fundraiser is held next year.

“This was awesome,” Cravey said, “and so much fun. And Tiffany was there with me, just like at the hospital.”

Among the UMMC employees heading downward was Jennifer Stephen, director of critical care and emergency services at Batson Children's Hospital. “I'm ready to go down the building again,” she said. “I hope they do this again next year.”

Phil Hanberry was the first of Team Maggie to head from the roof to the sidewalk. A team of friends and family of 17-year-old Maggie Hanberry of Hattiesburg, the crew of five raised some $7,200 and are already talking about recruiting more team members for 2017. Hanberry's daughter, Maggie, cancer free since February, came to the Children's Cancer Center at Batson Children's Hospital with stage 4 colon cancer.

“I didn't have any hesitation about signing up,” he said Saturday. “None. Batson Children's Hospital has been so wonderful to us the past two years. And today's my 53rd birthday. I'm going to remember 53 a long time.”

Maggie heard about the fundraiser, “and I said, 'Why not?' My dad was the first one to sign up on our team, and then my mom and I wanted to do it, too. Then a family friend heard us joking about it and wanted to sign up, and then a cousin.”

Like Phil Hanberry, Duane Dewey didn't balk at rappelling. “I said, 'Sign me up,'” Dewey, president of corporate banking at Trustmark. “I was a little more nervous than I thought I'd be, and I'm glad to get down, but I'd do it again.”

“It's a great hospital,” said Dewey's wife, Saundra. “It's an easy cause to support.”