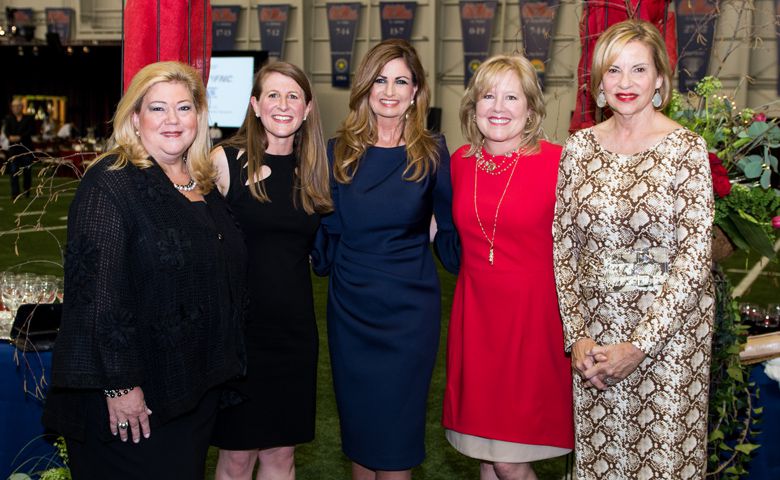 Those were the words of Rose Jackson Flenorl of Memphis, Tennessee, describing Chancellor Emeritus Robert Khayat, recipient of the 2016 Legacy Award of the Ole Miss Women’s Council for Philanthropy, on his vision for elevating the University of Mississippi. His successful leadership was celebrated at the largest seated dinner in Ole Miss history, with more than 800 guests attending.

“His life as a servant-leader is the best textbook we have ever studied,” said Jackson, a member of the OMWC and board chair of the University of Mississippi Foundation, naming numerous achievements during his tenure. “He will be remembered long after we’re gone.”

In giving a tribute to Khayat, Jackson spoke of his “courage and unwavering determination” and said he was a traditionalist who also brought contemporary progress to his university. Jackson told a story about a pond where rainbow trout were added and gave the analogy that Khayat had created “a pond where all kinds of fish flourish and are loved.”

The OMWC’s Legacy Award celebrates leadership, mentoring and philanthropy. C Spire was the presenting sponsor for the event set in the Olivia and Archie Manning Athletics Performance Center on campus. Olivia Manning, a past recipient of the Legacy Award, and Archie Manning emceed the program. Proceeds for the dinner will expand programming for OMWC scholarship recipients.

The evening featured many tributes, including those by many of Khayat’s friends and colleagues, as well as new UM Chancellor Jeffrey Vitter who thanked Khayat for helping him during his first few months in office.

Don Cole, a UM assistant provost, assistant to the chancellor concerning minority affairs and associate professor of mathematics, recounted how Khayat changed how the university was perceived nationally by first inspiring university community members about their perceptions. “He elevated my thinking. He elevated the university’s thinking. That will be his legacy.”

Provost Morris Stocks said Khayat “changed the direction and trajectory of our university.”

A visibly moved Khayat accepted the award for the “remarkable team” of Ole Miss, closing with lyrics of the John Denver song “The Ole Guitar,” saying “I love to sing my songs for you.”

Khayat’s achievements while chancellor from 1995 to 2009 included helping found an honors college and institutes of international studies, leadership and racial reconciliation. He secured a coveted Phi Beta Kappa chapter, attracted millions in private support and hosted the 2008 Presidential Debate. He transformed the campus through renovation, landscaping and new construction, including a chapel, a performing arts center and the Manning Center. Under Khayat’s leadership, student enrollment increased by 43.6 percent and the University’s budget grew from $500 million to $1.5 billion annually.

Karen Moore of Nashville, Tennessee, who completed her two-year term as chair of the OMWC at Friday’s board meeting, and Mary Susan Clinton of Naples, Florida, chair of the Legacy Award dinner, spoke throughout the evening and presented the actual award – a replica of The Mentor sculpture in the OMWC Rose Garden. Mary Donnelly Haskell – who became the new chair of the Women’s Council – sang “For the Love of Ole Miss.” Singer-songwriter Rivers Rutherford of Nashville performed a song written by country music star Marty Stuart, who also was featured on a video tribute to Khayat.

Chef Joel Miller of The Ravine in Oxford prepared the Legacy Award dinner; Ashley Jordan-Hill of Twisted Twig designed the floral creations. Those coordinating and assisting with the event were Christine Wallace and the Office of University and Public Events staff and interns, OMWC scholar recipients, Columns Society members, and Department of Nutrition and Hospitality Management students.

In addition, Khayat, event sponsors and OMWC Rose Society members were honored at a Songwriters Soiree featuring Rutherford on Friday evening at the Lyric. The UM School of Law hosted a fish fry Saturday to fete Khayat and sponsors at the Khayat Law Center.

Established in 2000 by a group of female leaders and philanthropists, the Ole Miss Women’s Council for Philanthropy awards scholarships that have grown to be among the largest and most prestigious on campus at $32,000 each. The scholarships are awarded each year to young women and men based on academic records, leadership and a desire to give back to society. When scholars become established in their careers, they are also encouraged to give back to the program.

There are 61 OMWC scholarships created by diverse donors who name them for themselves or for those who have been influential in their lives. Each new scholarship is acknowledged in a ceremony in the council’s Rose Garden where the sculpture, “The Mentor,” stands as its centerpiece.

The Rose Society is an annual giving program established in 2010 for individuals who want to support programming for OMWC scholars. Annual membership in the Rose Society requires a $1,000 tax-deductible contribution. Members are invited to all OMWC events and are recognized in OMWC communications and at the Legacy Award event. Rose Society membership dues go directly to the special programs which include two opportunities for each scholar to travel during his/her college career.