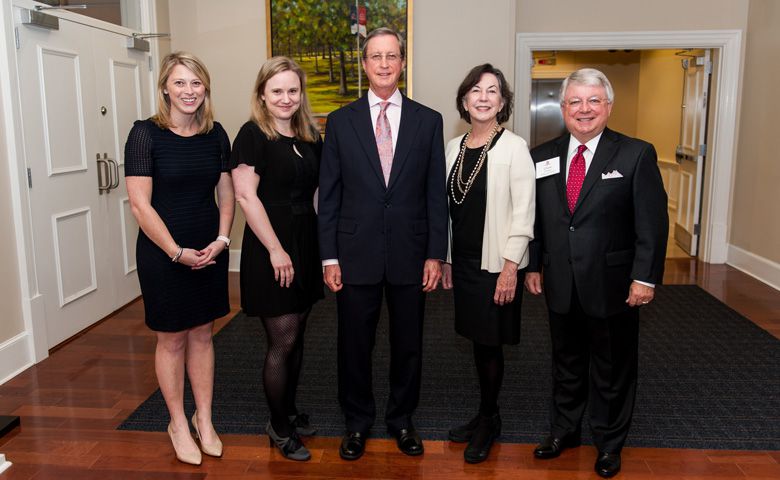 Bob Galloway (center) is greeted at the Inn at Ole Miss by (from left) Suzette Matthews, development officer for the School of Law, Jennifer Parsons, assistant dean of the Sally McDonnell Barksdale Honors College, Debbie Bell, professor of law and interim dean of law, and Cham Trotter, president-elect of the Lamar Order.

University of Mississippi alumnus Bob Galloway of Gulfport, Mississippi, has designated the Sally McDonnell Barksdale Honors College and the Lamar Order as beneficiaries of his $1.6 million planned gift.

Galloway said he knows the importance of planned giving and wants to support two university entities that helped shape his future. The Robert C. Galloway Endowment will be shared equally by the Honors College and Lamar Order and will be used to cover operating expenses.

A Carrier Scholar, Galloway was a member of the University Scholars Program as an undergraduate. The program eventually evolved into the Honors College of today.

“I’ve been very impressed with the things the Honors College has done, so I thought it would be a good recipient,” Galloway said.

“Galloway’s gift in particular will help sustain student research and experiential learning that paves the way for our Honors College to set the debate on campus for both students and faculty.”

“I have so many great friends I made at the law school and I’ve earned my living at practicing law since 1969. Also, I’ve been a longtime member of the Lamar Order and I know the school needs the money,” Galloway said.

Interim Dean of Law Debbie Bell agreed: “The law school is deeply grateful to Bob Galloway for his generous support. We are at a time when private support is essential for the law school to maintain our existing programs and grow to meet the needs of 21st century lawyers. Bob's vision for the future will impact the lives of hundreds of law students and help to shape law practice in Mississippi in the future.”

After law school, Galloway served in the U.S. Army for two years prior to beginning his career as an attorney on the Mississippi Gulf Coast. Having graduated a lieutenant after participating in the Ole Miss ROTC program, Galloway attended officer basic training in Fort Gordon, Georgia, and then Army Security Agency School at Fort Devens, Massachusetts. From there, he served as a military intelligence officer with the First Infantry Division in Vietnam for a year before being stationed in Virginia.

Having completed his required two-year commitment to the Army, Galloway returned home to Gulfport, where he began practicing law in his father’s firm.

“He was a senior partner in a firm called Eaton, Cottrell, Galloway & Lang, which grew and then split up and our part of the old firm became Butler Snow’s first satellite office with the main office being in Jackson,” Galloway said. “We had about 80 lawyers then and now there are about 335 with 17 offices in nine states, Hong Kong, London and Singapore.”

Galloway said he hopes his gift to the university will be used to maintain the quality of the institutions he loves.

“We have an outstanding law school there and I think the Honors College is becoming one of the real jewels of liberal arts education,” he said. “I would hope that it would continue to be that and be all it can be. I believe it can be as good a school as any in the South.”

Galloway’s planned gift gives him membership in the 1848 Society, named for the year the university opened the Lyceum doors to its first students. The society recognizes generous donors who thoughtfully provide for the university through planned and deferred gifts.

“I want to extend my heartfelt thanks to Bob Galloway for his powerful gift,” Sullivan-González said. “He will change lives of both students and professors for generations to come.”

For more information about including the university in a will or other estate plans, contact Sandra Guest, vice president of the UM Foundation, at 800-340-9542 or 662-915-5944, or visit www.umfoundation.com/planning.