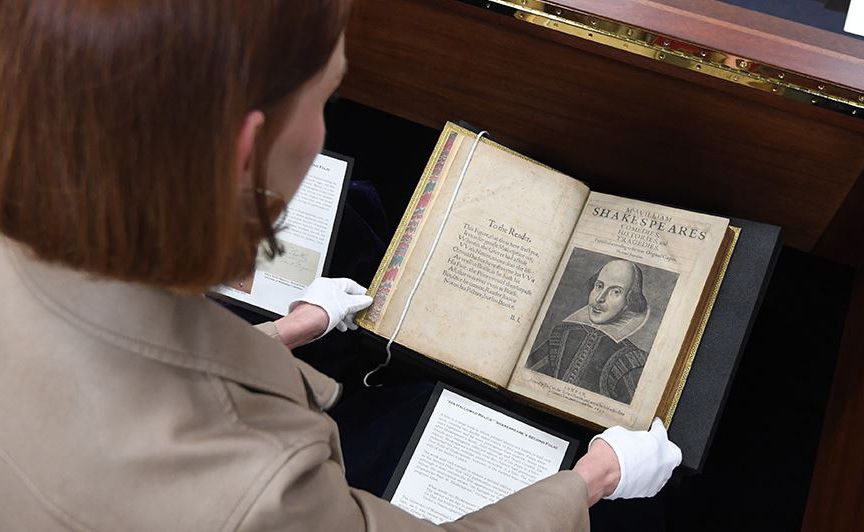 Jennifer Ford, head of Archives and Special Collections, prepares a copy of Shakespeare's Second Folio for public viewing at the J.D. Williams Library. Published in 1632, fewer than 200 copies are known to exist today.

It sounds like the beginning of a joke – “Shakespeare and Faulkner are in a room together” – but this time the punch line is serious.

The Department of Archives & Special Collections located in the J.D. Williams Library at the University of Mississippi has been home to the works of renowned Southern author William Faulkner for many years. Now, it will also house a significant historic artifact related to the works of William Shakespeare.

With a $150,000 gift, the Gertrude C. Ford Foundation enabled the university to purchase Shakespeare's Second Folio, a printed collection of all of the bard’s plays.

“Mrs. Ford was an expert in the work of Shakespeare. She knew all the works and had traveled to England two or three times to do research. She had written a book and a screenplay on Shakespeare, so she would be very excited that Ole Miss has this Second Folio among its collections,” said Cheryle Sims, Ford Foundation board member and longtime confidant of the late Gertrude Ford.

Shakespeare’s Second Folio recently arrived on campus, delivered by a specialized shipping company with experience transporting rare materials. It is now a permanent part of the University of Mississippi’s collection and is currently on display in Special Collections, where the public may view and study this important resource that has endured since 1632.

Coincidentally, Shakespeare’s First Folio is on a national tour from the Folger Shakespeare Library in Washington, D.C. The university, as the tour’s only Mississippi stop, will welcome the First Folio with an opening reception on April 11 at the Gertrude C. Ford Center for the Performing Arts, featuring introductory remarks from UM Chancellor Jeffrey Vitter and a lecture, “The History of Shakespeare’s Text,” by university historian Ivo Kamps. To attend the reception and First Folio viewing, contact Leah Hanks at 662-915-1652 or lhanks@olemiss.edu

A folio is a large book in which printed sheets are folded in half only once, creating two double-sided leaves, or four pages. Seven years after Shakespeare's death, his longtime friends John Heminge and Henry Condell, collected almost all of his plays in a folio edition. The 1623 First Folio of Shakespeare is the earliest folio consisting only of an author’s plays, according to the Folger Library.

The First Folio grouped the plays for the first time into comedies, histories and tragedies, and included the Droeshout portrait of Shakespeare, generally considered an authentic image because it was approved by those who knew him. More importantly, the First Folio preserved 18 of Shakespeare's plays that had never before been printed: All’s Well That Ends Well, Antony and Cleopatra, As You Like It, Comedy of Errors, Coriolanus, Cymbeline, 1 Henry VI, Henry VIII, Julius Caesar, King John, Macbeth, Measure for Measure, The Taming of the Shrew, The Tempest, Timon of Athens, Twelfth Night, Two Gentlemen of Verona and The Winter’s Tale.

Researchers believe that 750 or fewer copies of the First Folio were printed; 233 survive today. The First Folio sold well enough that it was followed nine years later by the 1632 Second Folio, full of small corrections, and later by two more editions.

“Edwin Booth was known for his more textually accurate portrayals of Shakespeare’s most famous characters. His copy of the Second Folio was likely a working copy, used to help create his powerful performances,” said Jennifer Ford, head of archives and special collections at the J.D. Williams Library.

“This copy of the Second Folio, owned by one of history’s foremost Shakespearean actors, is a tremendous acquisition for the University. It will be a resource for the entire University, as well as the general public,” Ford said. “It is impossible to calculate Shakespeare’s influence and his work continues to shape literature and culture. Mississippi’s own William Faulkner drew inspiration from the author, as well as countless others.”

The title of Faulkner’s novel, The Sound and the Fury, was taken from the protagonist’s famous soliloquy in Act 5, Scene 5 of Shakespeare’s Macbeth:

Tomorrow and tomorrow and tomorrow,
Creeps in this petty pace from day to day
To the last syllable of recorded time,
And all our yesterdays have lighted fools
The way to dusty death. Out, out, brief candle!
Life's but a walking shadow, a poor player
That struts and frets his hour upon the stage
And then is heard no more: it is a tale
Told by an idiot, full of sound and fury, Signifying nothing.

The university purchased Shakespeare’s Second Folio in a private sale through Southeby’s auction house. It had previously been owned by The Player’s Club of New York City, a social club founded by Edwin Booth in 1888 that remains a cherished gathering spot for actors and artists today.

“In late December, dedicated members of the university’s theatre faculty contacted me regarding the potential private sale of a rare copy of the Second Folio,” said Provost Morris Stocks. “When we learned that the Second Folio was available, we asked the Ford Foundation board members of their interest in helping us acquire this valuable piece of history. They immediately expressed their willingness to help.

“Due to the generous gift from the Ford Foundation, we were able to begin negotiations with the auction house in January,” he said. “These discussions took place over a series of weeks, and a mutually acceptable price was agreed upon. The payment process details were then worked out and the contract was signed in March.”

The Ford Foundation has already contributed more than $53.5 million to the university. Last fall, it expanded a $20 million commitment to $25 million in support of the university's proposed new science building. It had previously given $25 million for the 88,000-square-foot Gertrude C. Ford Center for the Performing Arts, which opened in 2002. The foundation has also supported several other university initiatives, such as the Gertrude C. Ford Ballroom in The Inn at Ole Miss, the Daniel W. Jones, M.D. Chair for Faculty Support on the Oxford campus, the Suzan Thames Chair of Pediatrics at the UM Medical Center campus and land for the Gertrude C. Ford Boulevard, providing a new north-south thoroughfare for the ever-growing Oxford-University community.

Gertrude C. Ford was raised in a generations-old tradition of philanthropy, which began more than 150 years ago with a $25 donation from her family to the Andrew Female College Building Fund in Randolph County, Georgia. Mrs. Ford established the Gertrude C. Ford Foundation in Jackson with a very generous gift in 1991. Mrs. Ford died in September 1996. She and her husband, Aaron Lane Ford, an Ackerman attorney and U.S. congressman representing what was then Mississippi's Fourth District, are buried in Cuthbert, a small town in southwest Georgia.