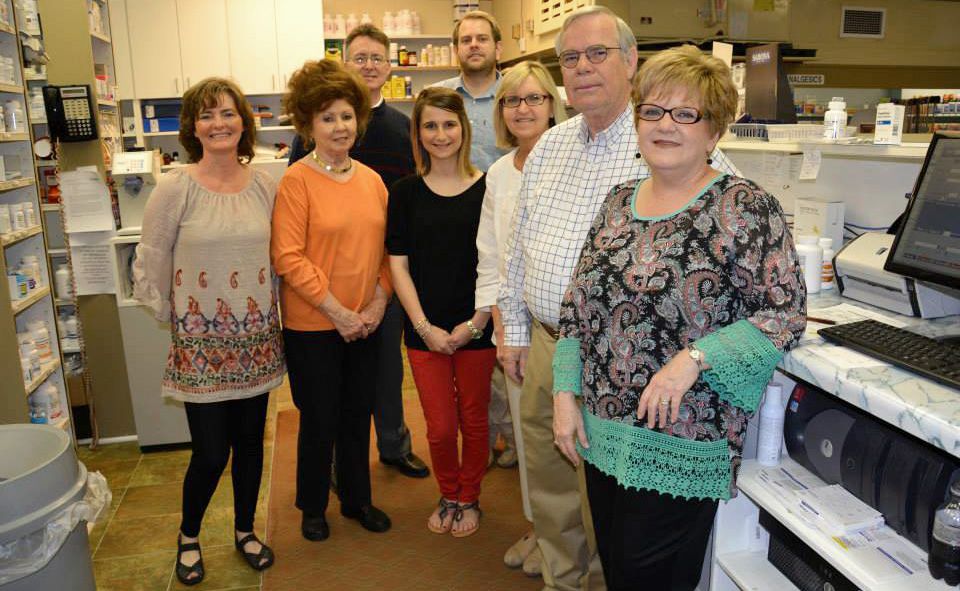 If you ask Sidney Gerald “Jerry” Morgan about why he chose pharmacy, he’ll tell you about his mentor and champion of the career, John Dewey Owings Jr.

“(Owings) was like a father figure to me,” Morgan said. “He was a great influence, and I would probably not have gone to pharmacy school if it weren’t for him.”

Morgan and his wife, Susie, have created the John Dewey Owings Memorial Scholarship at the University of Mississippi School of Pharmacy to honor the man who first steered Morgan toward his longtime profession.

The scholarship serves to support students in the professional pharmacy program who are Mississippi residents with first preference being given to those from Noxubee and Chickasaw counties. “This scholarship is a great way to honor (Owings’) lifetime legacy,” said Morgan, who earned his bachelor’s degree in pharmacy from UM in 1972.

It all started in 1950, when Owings opened Owings Drug in Brooksville. He had just graduated from the Ole Miss pharmacy school after serving in the military as a B-52 pilot in World War II.

Morgan began working at Owings Drug at the “ripe old age” of 13. He spent summers, weekends and holidays at the store until he was in college, learning all about the profession along the way.

Like Owings, Morgan enrolled in pharmacy school following his service in the Vietnam War.

“I feel so fortunate to have been able to go to school where (Owings) went,” Morgan said.

“I remember when I was struggling with career paths and changing majors, and my father reassured me by saying ‘no education is ever wasted,'” John Dewey Owings III said. “He was a wonderful father and role model, and Jerry is right there with him.”

Laney Owings recalled a number of fun stories about her grandfather. For one, she always wondered why she couldn’t find her grandfather’s composite photo at the school. Her father told her that he was likely fishing when it was time to take the photo.

“My grandmother Susie once told me that while living in Oxford, she worked with William Faulkner’s daughter, and that Mr. Faulkner would always have to give her a ride home from work when he came to pick up his daughter,” she said. “My grandfather was otherwise occupied with fishing.”

John Dewey Owings Jr. greatly influenced Morgan’s life and inspired him to be the best pharmacist he could be.

“He was an excellent pharmacist and was ahead of his time as far as innovation,” Morgan said. “He cared for the people of his community and tried to help everyone as much as he could. He was a great sponsor of athletics, a Boy Scout leader and friend. He would do anything in the world for anyone.”

Following his graduation, Morgan also opened an independent pharmacy, Okolona Drug, in 1974. Though he sold the store in 2015, Morgan still works there a couple of days per week.

“Owning Okolona Drug gave me the opportunity to help many people,” Morgan said. “It was extremely rewarding to meet so many generations of customers and people who trusted me as a pharmacist. It was amazing to return the favor of being good to the community.”

Morgan credited his wife and two daughters, Amy Morgan Meyers, who earned a Pharm.D. at the university in 2007, and Stephanie Morgan Zippy, for their support.

John Dewey Owings III said he cherishes the memory of Morgan and his father.

“Jerry is the nearest thing that I have to a brother, and I could speak volumes about the wonderful things he has done for me before this immensely thoughtful gift,” he said. “We spent many days hunting and fishing, as well as time in the store. My entire childhood is filled with memories of adventures with Jerry and my dad.”

“There are truly no words to express our deepest appreciation to Jerry,” she said. “I will always remember my grandparents as kind and humble people, but to have someone else not only recognize that but also memorialize it in such a way that carries on my grandfather’s legacy is incredibly meaningful.”

To contribute to the John Dewey Owings Memorial Scholarship, mail a check with the fund noted in the memo line to the University of Mississippi Foundation, 406 University Ave., Oxford, MS 38655. For more information, contact development director Raina McClure at rmcclure@olemiss.edu.