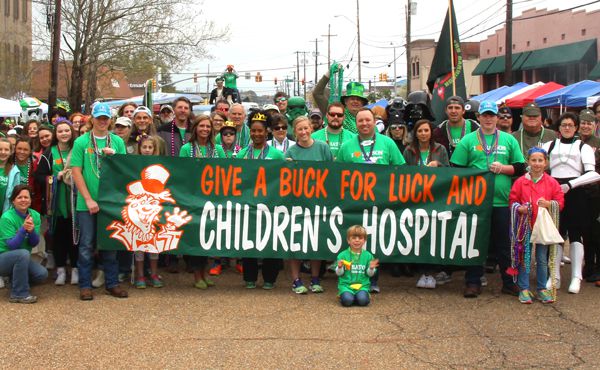 A green army of about 70 volunteers hit the streets of downtown Jackson Saturday during the Hal's St. Paddy's Parade, collecting donations for Batson Children's Hospital.

She brings along husband Alan Young in his "Star Wars" storm trooper garb, and along with them come their five children and an assortment of friends, each wearing a green city sweep volunteer T-shirt.

The whole Young crew plus a few march every year for their second family, Batson Children's Hospital. The city sweep is part of the efforts for the state's only children's hospital in an event that puts the "fun" in fundraising.

A nurse on Batson's second floor, Young said she and her family do their part because the money raised through float entries, 5K run registration and city sweeping, or to the uninitiated, the collecting of donations from parade goers and selling of T-shirts and Mardi Gras beads, stays right here in Mississippi.

"You hope you never need Batson Children's Hospital for your own child," she said, "but you want to have it ready if you do."

Some 70 city sweepers were out and about, mixing with the parade's audience and taking offerings of dollar bills from smiling children and larger bills from grown-ups. The biggest donation of the sweep was thought to be the $45 dropped into a canvas collection bag.

"I gave just because I love children," said Janet Richardson, a new resident of Morton who dropped a few dollars in the coffer.

Scott Steele loves kids, too. The US 96.3 on-air personality who earlier this month broadcasted from the Batson lobby during Mississippi Miracles Radiothon was out helping the hospital again, this time with son Colby.

"There's not enough hours in the day to do things for Batson Children's Hospital," he said.

This year's parade, renamed for founder Malcolm White's late brother, restaurateur Hal White, rolled despite cloudy skies, blustery weather and temperatures in the 50s. Laughed Gay Brown, wife of hospital volunteer Willie Brown of Vaughan: "Who else would get out in this cold to help the children?"

A supporter of Batson Children's Hospital for decades, the mashup of St. Patrick's Day and a Mardi Gras parade raised more than $25,000 for the hospital in 2015, a year when a downpour threatened to dampen the fun.

2016 numbers are still being tallied, but the event is expected to have brought in about $30,000.

Through the years of the annual festival, one of the nation's largest St. Patrick's Day parades, more than $400,000 has been raised for the state's only children's hospital.

“The annual St. Paddy's Parade & Festival is one of our favorite events each year,” said Jen Hospodor, manager of Children's Miracle Network Hospitals and Community Based Fundraising at UMMC's Office of Development. “Every event from the 5K to the City Sweep to the concert that night is filled with this great sense of camaraderie and fun, and of course, pride for our city. It is one of the longest-running traditions of fundraising for Batson Children's Hospital and we enjoy being a part of it.”

Guy Giesecke, CEO of Children's of Mississippi, the umbrella organization for Batson Children's Hospital and all pediatric care at UMMC, has been a part of the city sweep over the years. “People are really supportive and want to buy something once they know the money supports Batson Children's Hospital,” he said. “What our city sweepers do makes a big difference. It is really neat to see so many people helping our hospital, and we appreciate those who march and those who donate.”

Gina Burton knows how much a difference helping the hospital makes. She and daughter Kambree drove more than an hour from their Mize home to march as city sweepers, gathering donations for the hospital where Kambree was saved after previously undiscovered birth defects tried to claim her life.

"Anything we can do, we'll do," said Gina Burton. "We're just thankful."