skip to Main Content
Gift brings DeMiller's total contribution to the university to $500,000-plus 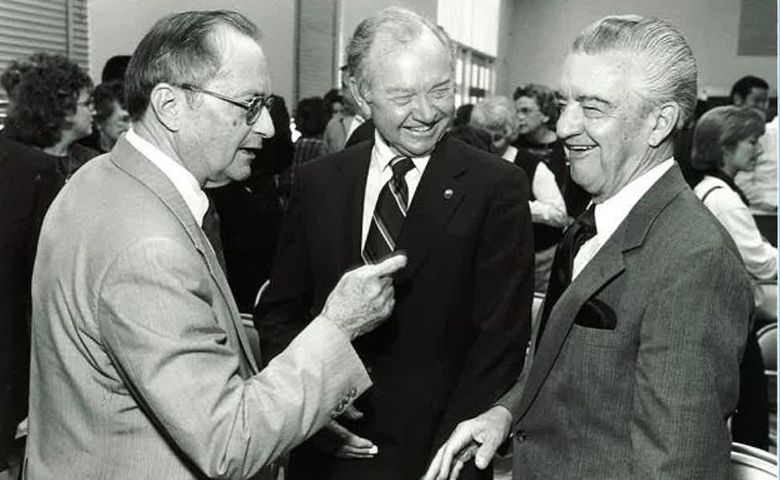 Renowned UM Accountancy Professor Gene Peery (left) lectures Eddie DeMiller (right) and Howard Davidson at the 1988 celebration of the funding of the Peery Chair in Accountancy.

Decades ago, the late Edward A. DeMiller Jr. hired a young CPA who now gives the elder accountant credit for his long-standing career.

“I have now been a CPA for 47 years and for the past 20 years have had my own firm. Any success I have had is owed in large part to the influence and instruction I received from Eddie DeMiller,” said Harold Hodges, a certified public accountant (CPA) with the Tupelo, Miss., accounting firm of Hodges, Pilgrim and Company.

“I would be remiss if I did not remember the man who hired me in 1968 and, for the next six years, was a significant influence on my career as a CPA,” Hodges said. “Mr. DeMiller was a dedicated professional, a man of integrity and one whose word was always trusted by clients and fellow CPAs alike.”

In 1994, DeMiller and his wife, Mildred (Mickey) Copeland DeMiller established a scholarship to help students in the University of Mississippi’s Patterson School of Accountancy pursue the career that DeMiller enjoyed. Recently, DeMiller’s estate fulfilled his wish to fully fund the Edward A. DeMiller Jr. Scholarship in Accountancy with a gift of more than $423,000, bringing his total UM giving to well over half a million dollars.

“I wanted to create this scholarship for accounting students because I’m an accountant, and it’s the only business I’ve ever been in,” DeMiller said in 2008. “And also for my love of Ole Miss.”

DeMiller, who received a bachelor’s degree in business administration with an emphasis in accountancy, died on Dec. 15, 2014, at 98 years old. He devoted his life to the profession of accountancy.

“He read the Journal of Accountancy up until his death,” said DeMiller’s longtime associate and friend Joey Katool, who met the elder accountant after joining the tax department of DeMiller’s firm in 1983.

Though the name has changed since its inception (currently Harper, Rains, Knight & Company), DeMiller, Alvin Word and Walter Denny, a 1957 UM graduate, built an accounting firm that has continued to grow. In its 60-plus years, the firm has given many Mississippi accounting graduates an opportunity to practice in the profession.

DeMiller himself was renowned as a pioneer in Mississippi public accounting. He was active in the Mississippi Society of CPAs, serving as president in 1959-60, and represented his home state’s interest nationally on several committees of the American Institute of Certified Public Accountants (AICPA). DeMiller received the Mississippi Society of CPAs inaugural Public Service Award in 1983. In 1989, he and Clive Dunham, accounting faculty member and former dean of UM’s School of Business, were selected as the inaugural inductees into the University of Mississippi School of Accountancy's Hall of Fame.

Katool believes DeMiller wanted to give back to the Patterson School because of his deep regard for widely respected professors Gene Peery and Jimmy Davis. “Also, I know he was proud of how (Accountancy Dean) Mark Wilder and his staff worked to have the Accountancy School rated in the top 10 in the country and first in the SEC,” said Katool, who earned a bachelor’s degree in accountancy in 1982 and a master’s degree in accountancy in 1983, both from Ole Miss.

Wilder said DeMiller’s generous private gift will be appreciated for generations to come.

“I have tremendous respect for Eddie DeMiller who had the foresight to provide such significant support for our students, knowing that gifts like this will ultimately have a great impact on the profession itself,” Wilder said. “Eddie was a proud Ole Miss accountancy alumnus and supporter for 75 years. He played an important leadership role in the development of our School of Accountancy and is truly a legend in the Patterson School. His legacy within our School lives on each year through the lives of our students who are honored recipients of the DeMiller Accountancy Scholarship. I believe he would be pleased to know that he is continuing to make a difference in the lives of those who want to pursue accounting as a career.”

The Edward A. DeMiller Jr. Scholarship in Accountancy, a $1,500 per year award, has been given to 12 students over the past seven years. Margaret (Meg) Joyner Barefoot was the first recipient in 2008.

“I switched from marketing to accounting my sophomore year and the scholarship really encouraged me to continue on the path toward pursuing my goal of becoming a CPA,” said Barefoot, who received a bachelor’s degree in accountancy in 2010 and a master’s degree in taxation in 2011. She currently works in the profession as a controller for a general contractor and developer in Oxford, Miss.

DeMiller retired as a partner in 1981 but continued to have an office to help his clients transition to other partners. Subsequently, the firm kept an office available for DeMiller for 17 years until it moved from downtown Jackson to Ridgeland in 1998.

“I worked closely with Mr. DeMiller in my first few years while working on his clients’ tax returns,” Katool said. “As a partner in the firm, I have several tax clients Mr. DeMiller brought into the firm over 50 years ago.”

Katool says he greatly admired the elder accountant and has found his sage advice invaluable.

“Mr. DeMiller was well respected not only as a CPA but as a person—a dignified southern gentleman with a philanthropic heart. When it came to work, he was a no-nonsense, let's-get-it-finished type of leader,” Katool said.

“Early on, I noticed that Mr. DeMiller took the same interest in his smaller clients that he exemplified with his larger clients. He was very client-service oriented. He was big on returning all client phone calls before he left the office,” Katool recalls. “I still remember him telling me, ‘Whatever you do in this profession, never leave the office without trying to return your clients’ phone calls. Let them know you care.’ It is an attribute I practice to this day.”

A Vaiden, Miss., native, DeMiller was a member of Sigma Alpha Epsilon fraternity while an undergraduate student and served four years in the U.S. Army after college. In 1947, he married Copeland and soon passed the CPA exam to begin his practice as a certified public accountant. He is remembered as a partner in the firm of Miazza, DeMiller and Word from 1948-1973. The firm then merged to become DeMiller, Denny and Word.

DeMiller was active in his community, including serving as president of the North Jackson Kiwanis Club, treasurer of the Mississippi Economic Council, and treasurer and board member of the Jackson Symphony Orchestra Association. He also contributed to the United Way and served as junior and senior warden of St. James Episcopal Church in Jackson.

Individuals and organizations can make gifts to support the Patterson School of Accountancy by mailing a check with the endowment noted to the University of Mississippi Foundation, 406 University Ave., Oxford, Miss. 38655; visiting www.umfoundation.com/makeagift or contacting Brooke Barnes, development officer, at 662-915-1993, or brooke@olemiss.edu.