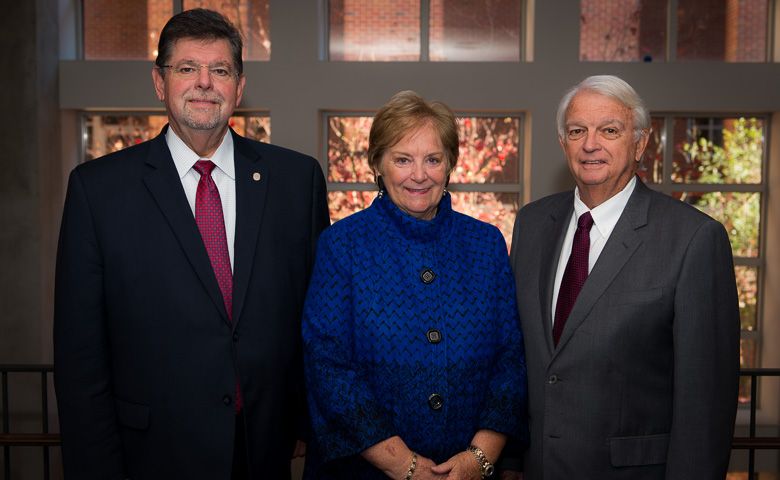 When Bob finished his master’s degree in accountancy from the University of Mississippi in 1967, he and Faye packed all their worldly belongings in a small trailer hitched to their two-door Mustang, strapped in their toddler daughter, Karman, and hit the road for Houston, Texas.

“The biggest thing in the trailer was our daughter’s baby bed,” Bob said.

Laughing, Faye said, “When we walked into our apartment in Houston, we were thrilled because it had carpet and air conditioning!”

It was luxury compared to their previous home: a two-bedroom apartment without A/C in the University’s married-student housing complex. Even this was a step up from the young family’s one-bedroom unit they inhabited upon arriving at Ole Miss for graduate school.

Tight quarters were only part of the struggle. Bob juggled his master’s level classes and homework with teaching a sophomore-level accounting class for which he would have to prepare lessons, grade papers, advise students, and write out tests. Meanwhile, to support the family, Faye often worked double shifts – day and night – as an x-ray technician at Oxford’s hospital.

“We were busy and stressed and we never really had time for outside activities,” Faye recalls.

“We were on a mission when we came here: to get the master’s degree,” Bob said. “Thank goodness for Faye. She hung in there and got us through.”

The struggle was real. But it’s not a sob story, say the Weatherlys, who were high school sweethearts and were married after their sophomore year in college. Their story is simply evidence that they can relate to the difficulties many young, married families face in trying to make a better life for themselves.

“We have decided that if there is any help we can give someone who is now in the situation we were in, then that would be meaningful to us,” Bob said.

So on Oct. 21, 2015, with a pledge of $250,000, the two worked with the University of Mississippi Foundation to establish the Bobby and Faye Weatherly Accountancy Scholarship Endowment. In November 2015 the pledge was fulfilled with the transfer of shares of publicly traded stock.

Mark Wilder, Dean of the Patterson School of Accountancy, said the Weatherlys’ investment will be felt for generations to come.

“We are humbled and honored by the Weatherlys’ belief in our program and profoundly grateful to them for this generous investment in our graduate students. Their experience when Bob was in graduate school is an inspiration, as is the incredible career that he has enjoyed in the accounting field. The Weatherlys’ gift truly is a reflection of their desire to help others enjoy greater opportunities through graduate accountancy education,” Wilder said. “The Weatherly Scholarship Endowment will help generation upon generation of married students earn master’s degrees in the Patterson School. We are so appreciative to Bob and Faye for their generosity.”

The Weatherly Scholarship will be awarded to full-time graduate students in the Patterson School of Accountancy’s master’s degree program with first preference going to married students.

“At the core of our reason for doing this was that I always felt that if we hadn’t had financial help from my teaching fellowship and if Faye hadn’t shouldered a big part of the financial burden so I could go ahead and get my degree, then we wouldn’t have wound up at the same place we are now,” Bob said.

Bob credits his degree from Ole Miss as a major first step in his business career.

After graduation, Bob immediately went to work for Arthur Andersen & Co. in Houston, then one of the nation’s top accounting firms. After working his way up to senior audit manager and having a second child, Bobby (Bo) Weatherly Jr., a major client of the firm hired Bob to be chief financial officer for their European operations and moved the family to London. After four years overseas, the Weatherlys returned to Houston with the same company; Bob later worked for two other oil service companies as a financial officer.

In 1990, Bob worked in investment banking before being one of the founders of a venture capital fund. From 2006 until early 2015 he worked for Callon Petroleum Company in Natchez, Miss., as the company’s chief financial officer and a Director.

Since leaving Oxford in 1967, both of the Weatherlys’ children have earned degrees from Ole Miss (Karman in speech pathology and Bo in business administration). One of the grandchildren, Blake Hagelston, completed his MBA from Ole Miss in August, 2015.

The Weatherlys always wanted to retire in Mississippi, but weren’t sure where. After a trip to Oxford for Faye’s birthday, Faye said she knew Oxford would be the place.

“When you go away, you forget how beautiful it is here,” she said.

Individuals and organizations can make gifts to support the Patterson School of Accountancy by mailing a check with the endowment noted to the University of Mississippi Foundation, 406 University Ave., Oxford, Miss. 38655; visiting www.umfoundation.com/makeagift or contacting Brooke Barnes, development officer, at 662-915-1993, or brooke@olemiss.edu.