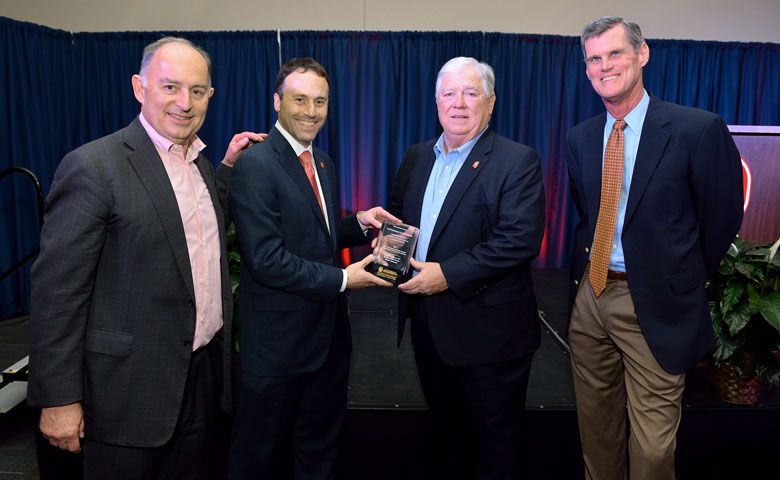 Former Mississippi Gov. Haley Barbour, second from right, receives the 2015 Distinguished Alumnus Award from the University of Mississippi Department of Political Science. Congratulating him are, from left, Lanny Griffith of Washington, D.C., chair of the Ole Miss Political Science Alumni Advisory Board; Lee Cohen, dean of the College of Liberal Arts; and John Bruce, chair of the Department of Political Science. An initiative to fund a chair in Barbour's name in the department is underway, with the study's focus on the American political system.

An initiative is underway to honor two-term Mississippi governor and national political leader Haley Barbour at the University of Mississippi, with a goal of attracting $1.5 million for a faculty chair in the Department of Political Science.

Initial gifts, already totaling more than $300,000, are an indication of the interest in building a study reflecting on Barbour’s role in shaping American politics over 50 years.

“Gov. Barbour has enjoyed a long and distinguished career and obviously has many more contributions to make” said John Bruce, UM chair of political science. “From his start working in the 1968 presidential election up through his two terms as governor of Mississippi, Gov. Barbour has been an example of what people can do in the political arena. His jobs have ranged from explicitly political to apolitical, and from appointed to elected.

“There is much in his career that we can point to when talking with students about ways to be engaged. Whether a student leans to the left or leans to the right, there are lessons to be learned by considering the arc of Gov. Barbour’s career.”

Plans call for the holder of the Barbour faculty position to study political institutions and processes that characterized Barbour’s far-reaching career. Among the leader’s achievements are building a state party organization during an historic shift in party allegiances, working in four successful presidential campaigns, serving as the political director in the Reagan White House, chairing the Republican National Committee during an epic off-year election, leading Mississippi as governor during Hurricane Katrina and building a lobbying firm in Washington, D.C.

The named faculty position would allow the department to recruit a preeminent scholar with expertise in American politics, offering enhanced opportunities for students to learn about the development of our nation’s politics from a gifted teacher and researcher, said Lanny Griffith, CEO of the BGR Group in Washington, D.C., and chair of the Ole Miss Political Science Alumni Advisory Board.

“This time in American politics looks remarkably dysfunctional, reflecting the importance of pursuing this work,” Griffith said. “We want this study to look at our political system not from partisanship but from scholarship, identifying what factors or dynamics will shape our political system going forward.

“The University of Mississippi is the perfect place for this study, considering the array of Mississippians who have played pivotal roles on the national stage.”

Bruce echoed that sentiment by pointing to the leadership roles of Barbour.

“His work in the White House, the governor’s office, the national party – these are all areas where political science has a great deal to say,” he said. “Gov. Barbour’s work has increased the visibility of our state, and his work after Hurricane Katrina brought substantial help to those in need. The Governor Haley Barbour Chair for the Study of American Politics will be a lasting legacy to an impressive body of work by one of our own native sons.”

Griffith added that building the Barbour Chair would impact young people’s lives. “I would hope that this study would help Ole Miss students understand the opportunities we have to be involved – the critical need to be involved – and help chart the course of our nation.”

Top Republican and Democratic political leaders participated in the launch of this significant campaign on the Oxford campus, including U.S. Sens. Thad Cochran and Roger Wicker and Texas Gov. Ricky Perry. Chairing the event were Austin Barbour and Paul Hurst of Jackson and Wilson Golden of Gainesville, Georgia, while Griffith is spearheading the overall fundraising for the chair.

While visiting campus for the reception in his honor, Barbour said he was “flattered and honored” to consider the prospects of a faculty chair bearing his name.

“It is special that the University of Mississippi has decided to establish this position, which will have more of a focus on politics and elections and less on government, as well as give attention to the development of a two-party political system,” he said. “I think most college students – whether they grow up in Mississippi or not – don’t realize the long history and importance of Mississippi’s elected officials in American politics. From L.Q.C. Lamar, who negotiated the end of Reconstruction, to an impressive array of leaders through history and to the present, Mississippians have been incredibly influential across the nation.

“We’ve had many Mississippians in politics who mattered, and not just in the state. And look at the development of the two-party political system in our state. Its development in the last 50 years has been rather remarkable. The first time I ever saw a political poll in Mississippi was in 1968, when only 6 percent of Mississippians identified themselves as Republican. You had to be an optimist to be a Republican in 1968.”

The fundraising campaign is nearing its first goal: building an endowment of $400,000 to fund initial work. Annual income from the permanent endowment will cover salary, research expenses and student learning opportunities.

The long-term goal is to attract funds to increase this endowment to the chair level at $1.5 million, when it will become known formally as the Governor Haley Barbour Chair for the Study of American Politics.

Ultimately, the endowed chair will attract a prominent scholar in the study of American politics, as the university remains focused on building faculty support as its student enrollment continues to soar. With the largest enrollment in the state, UM needs to add 215 new faculty members over the next three years.

Endowed faculty chairs honor the person for whom the position is named, ensure that young people are taught by gifted professors and strengthen the academic reputation of the university, from which Barbour himself earned a juris doctor degree in 1974.

To make a gift online, visit http://www.umfoundation.com/haleybarbour. Gifts can also be made by mailing checks payable to the University of Mississippi Foundation – with the fund’s name noted in the check’s memo line – to 406 University Ave., Oxford, MS 38655.