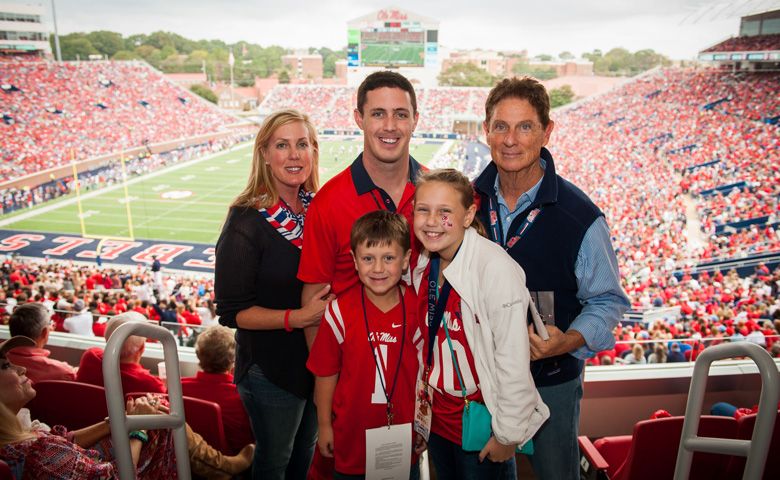 Bill Jordan, his wife Shannon, and their children--Tyler, a senior at Ole Miss, Graycen, 9, and Colton, 6--enjoy a recent football game together in Vaught-Hemingway Stadium.

Early in his career, Bill Jordan found it difficult to scrape up enough money to pay the rent on a trade show booth. Now, as creator and CEO of the nation’s leading line of camouflage patterns, he is recognized as a major supporter of Ole Miss Athletics, and his name will soon be directly linked with the most respected name in Rebel football history.

The Columbus, Ga., native, who caught Archie Manning’s passes as wide receiver from 1969-71, recently pledged $1 million to the Forward Together campaign. The pledge, which will be paid over the next five years, increases Jordan’s total Vaught Society giving to $2 million since 2013.

In recognition of his generous support to Ole Miss Athletics, the practice field at the Olivia and Archie Manning Athletics Performance Center will bear Jordan’s name following a spring 2016 dedication ceremony.

"It’s a great honor for my family and me. I feel especially good about being able to tie this gift to the Manning Center, having played football with Archie,” Jordan said. “Also, having graduated from Ole Miss with so many great memories and now having my son there as well, providing support just seemed like the right thing to do at this stage in my life.

“I’m telling people it’s a great time to be an Ole Miss Rebel,” he continued. “Ole Miss is very important to me and my family. We’re all Ole Miss Rebels through and through, and we hope this gift will help not only the athletics facility but the school as well.”

Jordan graduated from Ole Miss in 1973 with a bachelor’s degree in business administration and returned to Columbus to work at his family’s boat dealership. In 1983, he started Spartan Archery Products in the back room. At the same time, he began designing and developing what would become Realtree, the world’s most effective camouflage pattern, which he introduced at the 1986 Shooting, Hunting and Outdoor Trade (SHOT) show.

In the late ’80s, Jordan introduced the first Team Realtree logo. Today, Realtree employs more than 80 people and boasts more than 2,500 licensees of its patterns. Its logo adorns thousands of outdoor and lifestyle products. Richard Childress Racing’s #3 car, driven by Austin Dillon, even features Realtree as an associate sponsor, as does NASCAR Champion Kevin Harvick’s helmet. And Jordan is host of the widely popular “Realtree Outdoors” television show, which has aired since 1993.

Jordan’s athletic achievements earned him induction into the Georgia/Alabama Chattahoochee Valley Sports Hall of Fame and the Ole Miss Alumni Hall of Fame. In 2012, the Ole Miss Chapter of the National Football Foundation and College Hall of Fame honored him with its Distinguished American Award.

Jordan and his wife Shannon have three children, Tyler, a senior at Ole Miss; Graycen, 9, and Colton, 6.

“We are so thankful for generous alumni like Bill Jordan who know what it’s like to build a business into a national presence. Essentially, that’s what we’re doing here: We’re building a program that must continually improve in order to be competitive. Bill’s gift will certainly go a long way toward helping us do that,” said Keith Carter, senior associate athletics director for development and executive director of the Ole Miss Athletics Foundation. “Bill’s contribution is significant, but every gift to this campaign is important.”

To learn more about the Vaught Society and how it supports the Forward Together campaign, contact Keith Carter at jkcarter@olemiss.edu or call 662-915-7159.