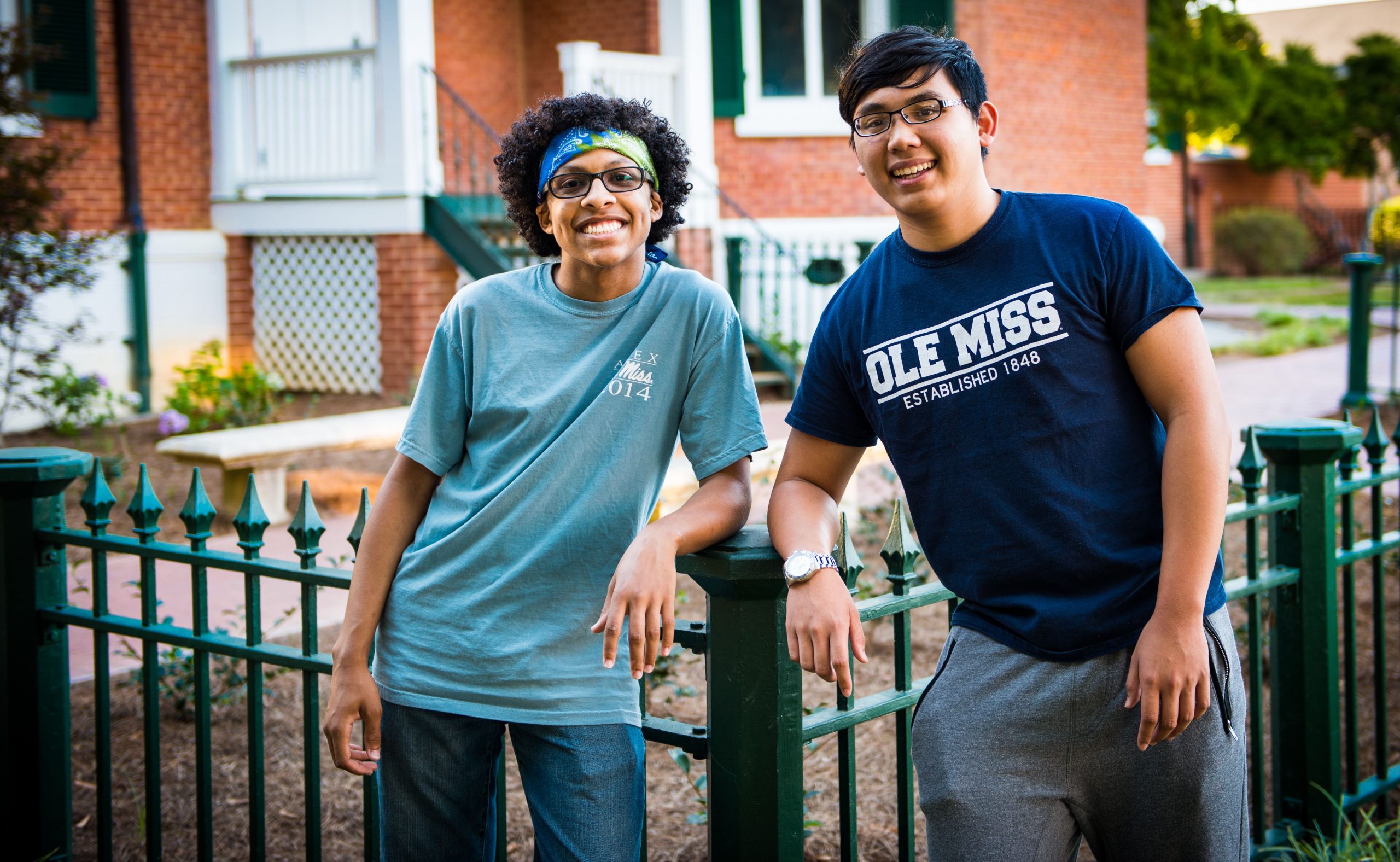 When University of Mississippi freshman Tan Le was in eighth grade, his father suffered a stroke that left him disabled. His mother worked long hours at a nail salon to make ends meet. Neither spoke English. Le’s parents fled poverty in their native Vietnam, hoping their children would have a better life, yet their financial situation in America wasn’t much better. At 16, when other kids were hanging out with their friends, Le would drive his father to dialysis.

Freshman Cisco Santos remembers times when money was scarce for weeks at a time. His mother worked the night shift here and there as a store clerk, cashier or receptionist to support Santos and his four siblings. His dad, a retired Navy veteran and ship builder who lives in Japan, would send money when he could, but sometimes the family’s needs were not immediately met.

Despite their hardships, both Le and Santos excelled in school, racking up honors and exceptional ACT scores. Both were in their respective schools’ chapter of the National Honor Society. They participated in extracurricular school groups, such as the drama club, student council, and the Junior Historical Society. Both were leaders in the band.

Le of Gulfport, Miss., and Santos of Southaven, Miss., will each receive $25,000 over the next four years as the first two recipients of the Annexstad Family Foundation Leaders for Tomorrow National Scholarship.

The scholarship is awarded to Sally McDonnell Barksdale Honors College students who meet three primary criteria: They must exhibit exceptional potential to become leaders in their chosen fields; they must have successfully triumphed over significant personal or family hardship; and their financial situation would otherwise prevent them from attending college. Candidates for the scholarship are selected by the university and awards are made by the donor. Working closely together, the University and the Annexstad Family Foundation seek to help Leaders for Tomorrow scholars graduate in four years as free from debt as possible.

“Maybe it was my strive for academic excellence that made them see that I could be a potential leader given the right environment,” said Santos, an honors student majoring in computer science. He hopes to work for Google someday.

Santos was grocery shopping for his mother when Honors College Associate Dean John Samonds called to tell him he was selected for the Annexstad Scholarship. “I was taken aback because the amount of money was so much that it would let me go to college pretty much for free.”

Le, also an honors student, is considering a major in exercise science and dreams of becoming a model or actor after college.

“I just want to do something that pays enough to support my family and me,” he said, adding that the Annexstad Scholarship helps give him the opportunity to make that happen. Now he can concentrate on his schoolwork without the added pressure of working his way through college.

The Annexstad Family Foundation was established in 2000 by Al and Cathy Annexstad and their family with the singular purpose of helping deserving young people realize their dreams of earning a college degree. Annexstad is former Chairman of Minnesota-based Federated Insurance Companies, one of the nation’s largest and financially strongest mutual, multi-line insurance organizations. Annexstad retired in 2012 after a stellar 48-year career with the company where he had worked his way up through the ranks.

“The University of Mississippi’s rich academic excellence and history of producing leaders in many fields is not only important for the state of Mississippi, but will ultimately produce future leaders for America,” Annexstad said. “Higher education is truly a great equalizer in life. It allows us as a nation to tap into a vast resource of desperately needed human capital. Equipping these talented scholars with world-class educations represents a significant investment in our nation’s future as they go on to make meaningful contributions to society.”

To date, the Annexstad Family Foundation has awarded 501 scholarships—more than 100 in 2015 alone—to students at over 60 colleges and universities across the country.

University of Mississippi Foundation President Wendell Weakley said the Annexstads decided to award scholarships to UM students after accompanying their granddaughter on a campus visit.

“About a week after their visit, we got a call from the Annexstad Foundation saying they were interested in establishing a scholarship here,” Weakley said. “Al is truly the ideal philanthropist. He loves to give back when he knows it will make a difference.”

Indeed, the Annexstad Family Foundation is well on its way toward achieving Al and Cathy Annexstad’s goal of sending 1,000 young people to college. Most notably, the Annexstad Family Foundation proudly points to a nearly 90 percent graduation rate among scholarship recipients, an extraordinary achievement considering that the majority of Annexstad Scholars are first-generation college students. Today, more than 100 Annexstad graduates are successfully pursuing careers in medicine, business, science, engineering, law and other critical fields.

Losing parents to untimely deaths in their youth, both Al and Cathy Annexstad experienced the power of mentoring as their communities and families rallied around them in their formative years. Al was raised by a loving single mother who deeply appreciated how caring adults in her community reached out to Al and his siblings to help guide them on the right path in life. Likewise, Cathy benefited immensely from the encouragement and nurturing she received as a teen from family, friends and neighbors following the untimely death of her mother. Al and Cathy gained a deep, personal understanding and appreciation for how caring adults can impact a young person’s life. Perhaps more importantly, they came to understand how a young person’s life can be impacted by hardship and then improved by the opportunity for higher education.

The Annexstads can easily empathize with young people like Le and Santos who have endured extraordinary challenges. Thus, their foundation’s mission is to provide college scholarships to deserving young people who, in their words, have “bright minds, big dreams and little means to make those dreams come true.”