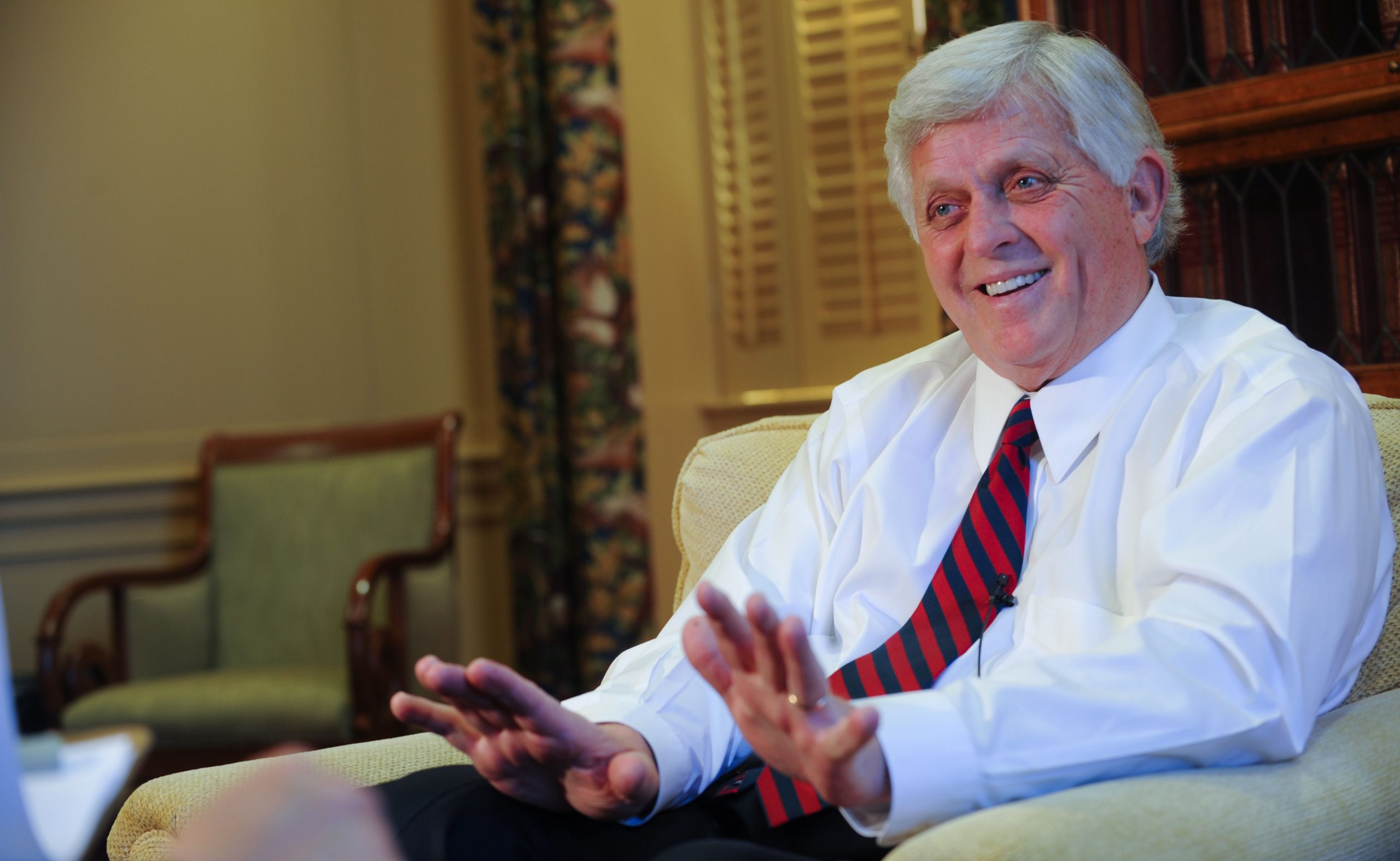 Chancellor Emeritus Robert Khayat has been selected by the Ole Miss Women's Council as the 2016 Legacy Award recipient. Sponsors are now being sought for the April 16, 2016, event honoring this leader, with proceeds supporting the leadership-mentorship programs of the OMWC.

Chancellor Emeritus Robert C. Khayat, leader of what has been called a "renaissance" at the University of Mississippi, has been chosen as the 2016 Legacy Award recipient by the Ole Miss Women's Council for Philanthropy.

The OMWC and presenting sponsor C Spire will honor Khayat during campus events April 16, 2016, and additional sponsors are being sought.

Khayat, who served as chancellor from 1995 to 2009, personifies a servant leader, said OMWC chair Karen Moore of Nashville, Tennessee.

"We use the Legacy Award to honor someone who epitomizes leadership, mentorship and philanthropy, flagship components of our program," Moore said. "These are also areas we want our scholars to be mindful of when they graduate. We could not find a better example of these attributes than Robert Khayat.

"He has had tremendous influence on our university's achievements, as well as his fingerprints on universal changes. When you hear amazing leaders' success stories, they always talk about giving back, being inclusive, leaving their places of leadership stronger than when they began and encouraging others to succeed. This perfectly describes Dr. Khayat."

Proceeds from the annual Legacy Award event help fund OMWC leadership training and mentorship programs. In its 15th year of existence, the OMWC has built a scholarship endowment of more than $11 million with named scholarships awarded to male and female students selected after an in-depth interview process.

The scholarships – which have grown to be among the largest on campus at approximately $32,000 each – are awarded based on students' academic performance, leadership and a desire to give back to society.

"The Women's Council uniquely guides our scholars into their future careers and helps them develop life skills through leadership-mentorship programs," said Becky West of Memphis, Tennessee, an OMWC founding member. "Funding an Ole Miss Women's Council Scholarship is one of the best investments a person can make."

Khayat was chancellor when the Women's Council was formed and has continued to be a source of support, calling the council's scholarships some of the most "innovative in the nation." In addition, Khayat established an OMWC scholarship to honor the contributions and support of his wife, Margaret, in her role as Ole Miss' first lady.

Khayat's own experiences reflect a life journey that shaped his leadership style and abilities. While an Ole Miss student, he excelled in the classroom, earning both undergraduate and law degrees. As the kicker on the Ole Miss Rebels football team, he helped secure many victories under legendary Coach John Vaught, as well as wins as catcher on the baseball team.

Lessons learned from teamwork, competition, discipline and perseverance prepared him for other pursuits. His unusual resumé includes both "All-Pro kicker for the Washington Redskins" and "Sterling Fellowship for a Master of Law from Yale Law School."

During his tenure as chancellor, major new programs were founded, including the Sally McDonnell Barksdale Honors College, Croft Institute for International Studies, Lott Leadership Institute, Winter Institute for Racial Reconciliation and the Overby Center for Southern Journalism and Politics.

He also helped secure a coveted Phi Beta Kappa chapter, attracted millions in private support, hosted the 2008 presidential debate and transformed the campus through renovation and new construction – including adult and children's hospitals at the UM Medical Center, Paris-Yates Chapel, Gertrude C. Ford Center for the Performing Arts, and the Indoor Practice Facility (since renamed the Olivia and Archie Manning Athletics Performance Center).

Under Khayat's leadership, student enrollment increased by nearly 44 percent and the university's operating budget grew from less than $500 million to nearly $1.5 billion annually.

His memoir, "The Education of a Lifetime," was selected for the university's 2015 Common Reading Experience. Incoming freshmen received a copy of the book before coming to campus, and the former chancellor spoke at the recent fall convocation.

For more information on available sponsorships ranging from $5,000 to $20,000 for the 2016 Legacy Award Program, contact Nora Capwell at ncapwell@olemiss.edu or 662-915-2384. To learn more about the scholarship program, visit http://www.omwc.olemiss.edu.