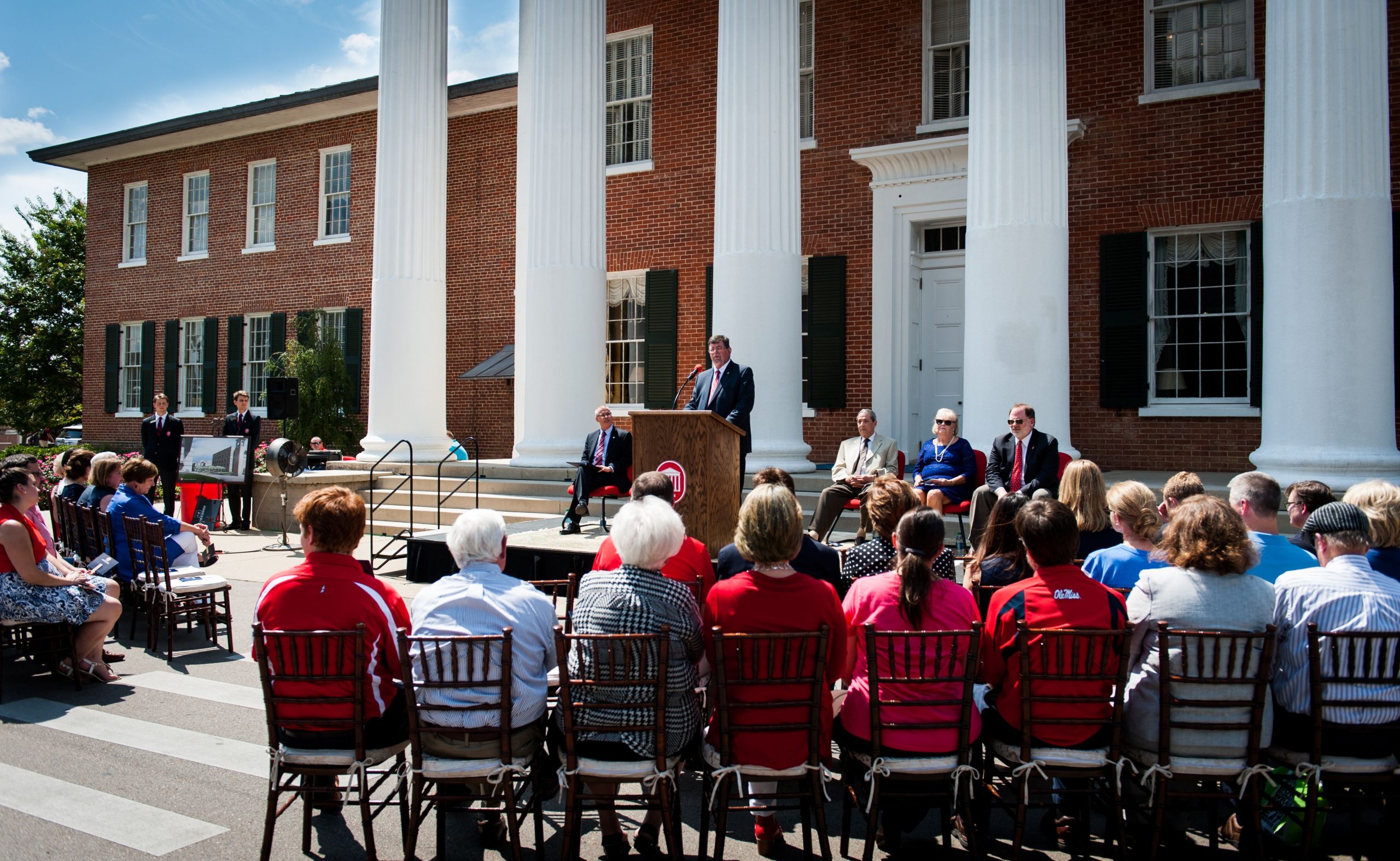 The Gertrude C. Ford Foundation is expanding a $20 million gift to $25 million in support of the University of Mississippi's proposed new science building.

The increase, announced today, reflects the belief that the facility will strengthen the state through increasing general science literacy and through preparing a greater number of science, technology, engineering and mathematics graduates as well as K-12 teachers in those subjects. The gift brings the Ford Foundation's support of UM to more than $53.5 million.

In a ceremony on the steps of the Lyceum, university leaders thanked Ford Foundation board members Anthony T. Papa, Cheryle M. Sims and John C. Lewis, all of Jackson, and revealed drawings of both the science building and Gertrude C. Ford Way, a walkway that will be used by thousands of students, alumni and friends each year.

"The Ford Foundation board members have demonstrated a tremendous commitment to helping meet the needs of our university, with the overarching mission of making a significant impact throughout our state and far beyond," UM Acting Chancellor Morris Stocks said. "We believe this new facility will provide a platform to increase student research through hands-on education and active learning, while encouraging collaborative research between students and faculty."

Ford Way will pick up where the Walk of Champions ends at the edge of the Grove, run alongside the new science building and stretch to a gathering plaza between Vaught-Hemingway Stadium and the Pavilion at Ole Miss arena.

Ford Way will be the major artery through the Science District, which is the section of campus between University Avenue and All American Drive. In addition to being the location for the science building, it will be the site of a commemorative area created to honor author William Faulkner and the activities he performed in that part of campus. As a result, this pathway will bring together science and Faulkner's literary works in a way that honors the connection to the liberal arts.

With work on Ford Way and the science building slated to begin in spring 2016, the proposed 200,000-square-foot, $135 million science facility will be another enhancement to Science District. The new construction follows the completion of the Thad Cochran Research Center West Wing – an addition of more than 96,000 square feet described as the most technically sophisticated research building in the Southeast – and an expansion of Coulter Hall, adding almost 36,000 square feet.

"Our vision is that this will be one of the country's leading, student-centered learning environments for STEM education," Eftink said. "It will offer state-of-the-art labs and classrooms, including what are called 'technology-enhanced active learning' labs. This will be a place where our students will be able to enter in the morning to take classes, meet up with other students for study sessions and lunch, participate in afternoon lab classes, work on research projects and engage with the building to learn about STEM fields in casual, informal ways."

The additional space and technological advances offered by another science building are critical to serving the soaring student enrollment, Ole Miss leaders say. Last fall, UM enrolled more than 23,000 students across all its campuses, and university officials expect healthy growth when this fall's enrollment is finalized next week. In fact, The Chronicle of Higher Education has listed UM as the nation's 13th fastest growing university.

"The new STEM building will be a real game changer for the university," Eftink continued. "We all hear about the need to increase graduates in STEM fields, to support growth in the regional economy and to support the pipeline for training health professionals, engineers, and science and math teachers. We have reached a stage where we are almost maxed out in our ability to provide STEM courses, especially lab courses, for students wishing to major in these areas. This building will meet a very critical need to assure that students can pursue their goals of majoring in STEM fields."

Board member John Lewis said that a number of schools and universities petition the Ford Foundation for funding, but the thing that appealed to board members was UM's vision.

"Many educational institutions appeal to us for assistance, and we definitely are trying to help where we can," said Lewis, a senior vice president with Trustmark National Bank. "But we don't want to be filling potholes – we want to help build roads. This building is something forward that enhances the future of our state.

"We lose brain power when students pursue degrees outside the state and then don't return. We have great opportunities within the universities of this state but need many more. State-of-the-art facilities attract outstanding professors and they, in turn, attract talented students. By providing the environment and resources gifted young people require to make those great discoveries, all of our lives will be better. Our state has the ability to be stronger; we just need to provide the means."

UM will seek other private, state and federal funding, use internally generated cash and borrow funds to cover the remaining costs. University leaders hope to see the building completed by fall 2018, after what has been a very informed and thought-out plan on the Oxford campus regarding STEM education.

"The University of Mississippi has had a long-standing commitment to STEM education and research and continues to establish a strong foundation for the future," Clark said. "It is gratifying to see many of the recommendations from the Innovations in STEM Education Task Force coming to fruition. This facility will be key to ensuring the university is at the forefront of STEM education. It will help us produce graduates who will fulfill critical national needs, who will improve STEM teaching in our education systems and who will act as scientifically aware citizens in our society."

"We are fully committed to this new science building and do believe we are meeting a great need," Ford Foundation board member Tom Papa said. "We are proud to be a part of an initiative that will have such a tremendous positive impact for Mississippi. The foundation's 20-year relationship with Ole Miss has proven that the university will be a good steward of this investment."

Cheryle Sims, a board member and longtime confidant of the late Gertrude C. Ford, agreed, saying, "The Ford Foundation board has made this long-standing commitment to Ole Miss, and I believe we have helped strengthen and enhance the Oxford campus. Mrs. Ford would be extremely pleased to see how her resources have been used at this university we all love."

The Ford Foundation has already contributed $25 million for the 88,000-square-foot Gertrude C. Ford Center for the Performing Arts, opened in 2002, and gifts to several other university initiatives, such as the Gertrude C. Ford Ballroom in The Inn at Ole Miss, the Daniel W. Jones, M.D. Chair For Faculty Support on the Oxford campus, the Suzan Thames Chair of Pediatrics at the UM Medical Center campus and land for the Gertrude C. Ford Boulevard, providing a new north-south thoroughfare for the ever-growing Oxford-University community.

Gertrude C. Ford was raised in a generations-old tradition of philanthropy, which began more than 150 years ago with a $25 donation from her family to the Andrew Female College Building Fund in Randolph County, Georgia. Mrs. Ford established the Gertrude C. Ford Foundation in Jackson with a very generous gift in 1991. Mrs. Ford died in September 1996. She and her husband, Aaron Lane Ford, an Ackerman attorney and U.S. congressman representing what was then Mississippi's Fourth District, are buried in Cuthbert, a small town in southwest Georgia.